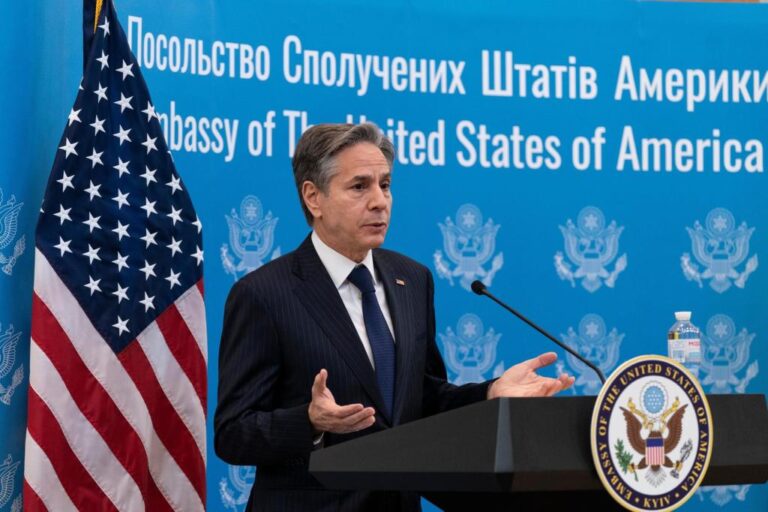 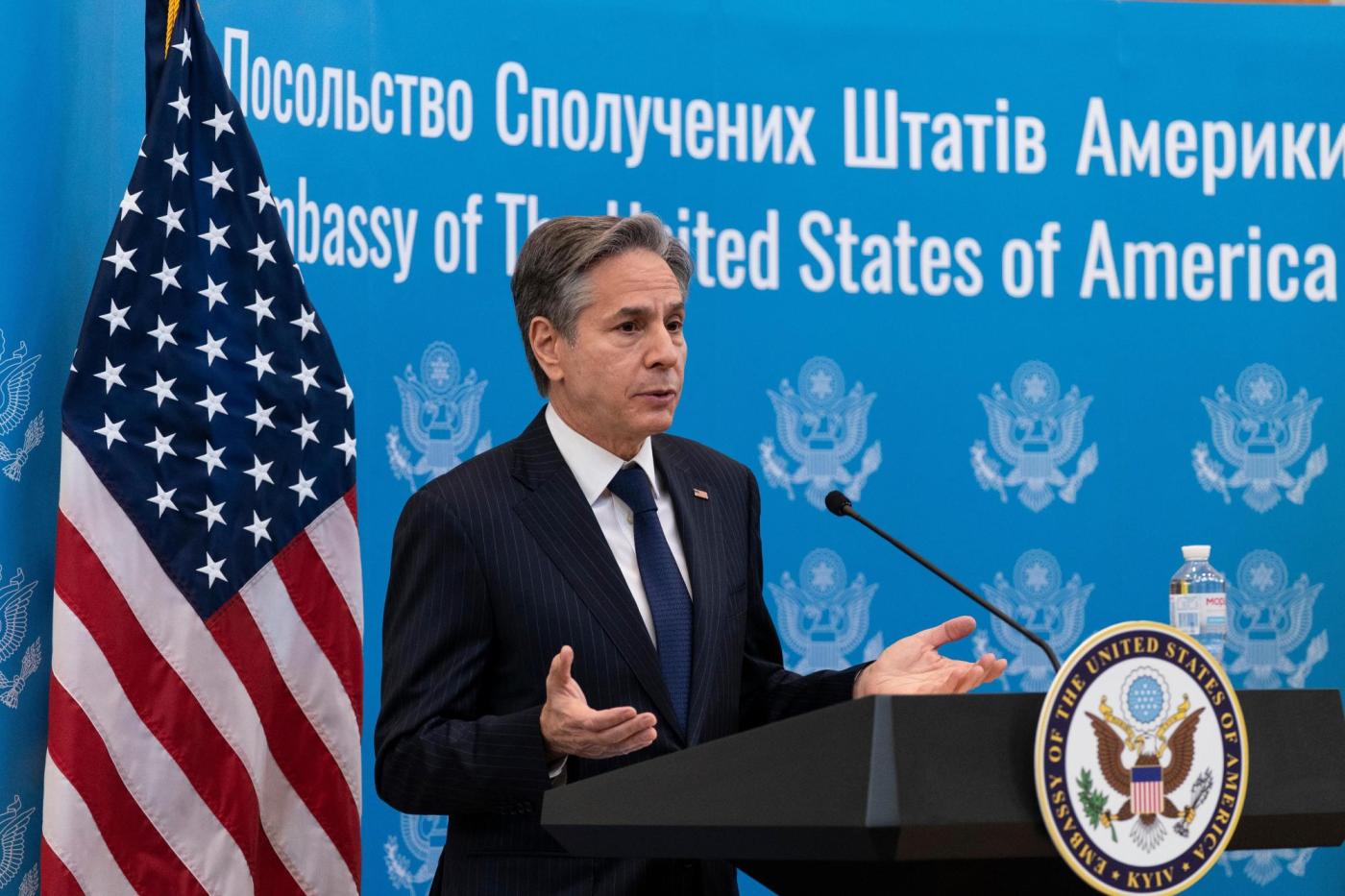 By Matthew Lee and Aamer Madani

WASHINGTON (AP) – President Joe Biden said he believes Vladimir Putin does not want a full-fledged war in Ukraine and will pay a “dear price” if he moves forward with military incursions.

Biden, speaking at a news conference to mark his one-year anniversary in office, also said he believes Russia is preparing to act on Ukraine, although he does not think the Russian president has taken the final decision. He suggested that he limit Russia’s access to the international banking system if it invades Ukraine further.

Biden’s remarks came hours after US Secretary of State Antony Blinken visited Kiev accusing Russia of planning to strengthen more than 100,000 troops stationed on Ukraine’s border and suggested the numbers were “on a relatively low order”. can be doubled. Blinken did not elaborate, but Russia has sent an unspecified number of troops from the country’s Far East to its ally Belarus, which shares a border with Ukraine, for major war games next month.

The US president said he believed the decision would be “entirely” Putin’s and suggested he did not fully believe the Russian officials with whom the top White House adviser is negotiating. are fully informed about the thinking of.

“There’s a question whether the people they’re talking to know what he’s going to do,” Biden said.

Biden also suggested that a “minor incursion” would elicit a lesser response than a full-scale invasion of Ukraine, adding that “it is very important that we keep everyone on the same page in NATO.” Later at the news conference, Biden sought to clarify that he was referring to a non-military action, such as a cyberattack, that would be met with a similar reciprocal response.

Meanwhile, Ukraine said it was prepared for the worst and would survive any difficulties that might arise. The President appealed to the country not to panic.

Blinken’s visit to the Ukrainian capital comes two days before he will meet with Russian Foreign Minister Sergei Lavrov in Geneva. It follows a series of inconclusive talks last week that failed to defuse rising tensions.

Russian military activity has been increasing in recent weeks, but the US has not concluded whether Putin is planning to invade or whether the show of force is aimed at squeezing security concessions without an actual conflict.

Biden, who spoke to Putin twice last month, said he had made it clear to him that Russia would face severe sanctions. Still, he said the decision for Putin could come down to “which side of the bed”.

Biden warned, “He’s never seen as I promised, if he goes ahead, there will be sanctions, No. 1.” “It’s not all just a cake walk for Russia,” Biden said. “They will pay a hard price immediately” and in the medium and long term “if they do.”

In Kiev, Blinken reiterated Washington’s demands for Russia to ease the situation by withdrawing its forces from the border area, something that Moscow categorically refused to do. And, Blinken said he would not give Russia the expected written response to its demands when he and Lavrov meet in Geneva.

Meanwhile, a top Russian diplomat said Moscow would not back down from its insistence that the US formally ban Ukraine from joining NATO and reduce its and the coalition’s military presence in Eastern Europe. Deputy Foreign Minister Sergei Ryabkov said Moscow had no intention of attacking Ukraine, but its demand for security guarantees could not be compromised.

The US and its allies have said Russian demands are non-starters, that Russia knows they are and that Putin is using them to create an excuse to invade Ukraine, which has strong ethnic and historical ties to Russia. . The former Soviet republic aspires to join the coalition, although it has little hope of doing so in the near future.

Blinken urged Western countries to remain united in the face of Russian aggression. He called on Ukrainians to stand firm, assuring the leader of Ukraine’s NATO support.

Blinken told Ukrainian President Volodymyr Zelensky that the US and its allies were determined to support his country and its democratic aspirations against Russian attempts to incite division and discord through “relentless aggression”.

“Our strength depends on maintaining our unity and this includes unity within Ukraine,” he told Zelensky. “I think one of Moscow’s long-standing goals has been to try to sow the divide between our countries and between our countries, and quite simply we will not allow them to do that and will not. “

The Biden administration previously said it was providing an additional $200 million in defensive military aid to Ukraine. Blinken said more aid was coming and that it would only increase if Russia invades.

Zelensky thanked Blinken for the assistance, which was approved in late December but was not ratified until Wednesday.

Referring to Kiev’s desire to join NATO, he said, “This (military) support speaks not only to Ukraine’s strategic plans to join the alliance, but also to the level of our military, our military supplies.” is important.”

“Your visit is very important,” said Zelensky. “This once again underscores your powerful support of our independence and sovereignty.”

Zelensky released a video address to the nation on Wednesday evening, urging the people of Ukraine not to panic over fears of a possible invasion. But he said the country has been living with the Russian threat for many years and should always be ready for war. He called on all Ukrainians, especially the elderly, to “breathe” and “calm down”.

The President of Ukraine also assured that the country is strengthening its defense capabilities and doing everything possible to resolve the crisis through diplomacy.

“Ukraine does not want war, but should always be ready for it,” Zelensky said.

From Kiev, Blinken plans a short trip to Berlin for talks with German and other European allies on Thursday before meeting with Lavrov.

On Wednesday, French President Emmanuel Macron called on the EU to draw up a plan to de-escalate tensions with Russia, saying “we must build it among the Europeans, then share it with our allies within the framework of NATO”. , and then it should be proposed for talks with Russia, ”he said.

Washington and its allies keep the door open for further possible talks on arms control and confidence-building measures to reduce the likelihood of hostilities.

However, Ryabkov insisted that there could be no meaningful dialogue on those issues if the West did not heed the main Russian requests for non-expansion of NATO with a formal response. He added that Russian demand “is a package, and we are not prepared to split it apart, to start processing some of them at the cost of standing idle on others.”

However, Blinken said no such formal response was coming. “I will not present a paper to Foreign Minister Lavrov at that time,” he said. “We need to look at where we are and see if there are opportunities to advance diplomacy and advance dialogue.”

The Biden administration and its allies have accused Putin of causing the crisis, saying it is up to him and the Russians to attack and face dire economic consequences.

Russia has rejected calls to withdraw its troops, saying it has the right to deploy its forces wherever it pleases on its territory. It has also rejected US allegations that it is preparing a “false flag operation” to use as a pretext for interference. Russia has angrily denied the allegation.

Before Blinken’s visit to Kiev, a delegation of US senators traveled to Ukraine to emphasize Congressional support for the country.

Russia annexed the Crimean peninsula in 2014 after ousting Ukraine’s Moscow-allied leader and threw its weight behind a separatist insurgency in eastern Ukraine. More than 14,000 people have been killed in nearly eight years of fighting between Russian-backed rebels and Ukrainian forces in the country’s industrial region of the Donbass.

Lee reported from Kiev. Associated Press writers Vladimir Isachenkov in Moscow and Yuras Karmanau in Kiev contributed to this report.