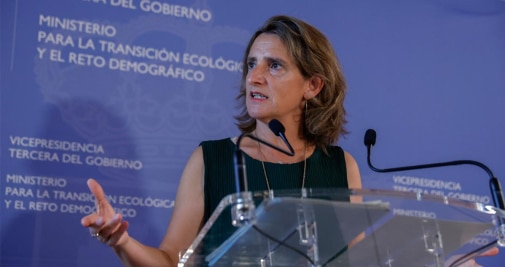 The year 2022 has been grim move back for the strategy of energy transition The government prepared in a scenario extremely complicated by the war in Ukraine, among other factors. load of renewable energy in electrical mix has fallen to 43.7%, which is almost five points less than last year and the lowest figure since 2019. Other than this, combined cycleWhich use natural gas as fuel, became the first source of production for the first time.

Notably, 26.2% of electricity demand over the year was thanks to combined cycle plants, which generated 60,599 gigawatts/hour (GW/h), an all-time high. Despite a strong push in the last weeks of the year, due to strong wind gusts, wind power lost first place and generated 25.8% of the electricity consumed peninsular system In 2022.

The trend is not specific to the year that has just ended. Since 2019, electricity generation at combined cycle plants has increased by 18.5%; In the same period, wind farms Installed in the system produced 12.7% more.

Strong growth experienced by generation at thermal power plants in coalDespite the closure of a good number of these plants in recent years.

according to data from Network (new name electric network), the amount of electricity generated from coal, one of the sources with the highest emissions of polluting gases, increased by 56.3% in relation to the previous year’s figures, reaching 7,717 GW/h, representing a 3.3% Does total (compared to just 2% in 2021).

Not since the year before the pandemic hit, has such a low percentage of generation from renewable sources been recorded. That 2019, the figure was barely over 38% and since then, progress has been remarkable, no less than ten points, to 48.4% last year.

complicates the objective contemplated in the retreat National Integrated Energy and Climate PlanWhich confirms reaching 74% of electricity generated from renewable sources in the year 2030, when it expires.

In addition to the consequences for the design of the future electricity mix, the impact has also been economic, although reduced by the agreement made by the governments of Spain and Portugal to limit the price of gas for electricity generation, arguing that Iberian Peninsula It constitutes an energy island due to the rare possibilities of connection with the rest of the European systems.

The so-called “Iberian exception” notably lowered electricity prices until it came into effect, around the middle of the year, setting an all-time record with an average of over 300 Euro per MW/h in the first quarter. did. ,

The increase was due to the large-scale use of gas for fine production, a trend that has continued after the agreement. The European Union And this has kept prices comfortably above €150 per MWh, except towards the end of the year.

A combination of strong penetration of wind power into the mix and subdued holiday demand has pushed prices down to their lowest levels in recent quarters.

In addition to these elements, the roadmap designed by ministry of ecological transition It can also be hindered by degradation in processing new connection points. The boom in investment in renewable energy and the many bureaucratic processes mean that, at present, around 80 MW of installed power is in the air and could hang in the balance if their processing is not unblocked.

administrative blockade is one of its elements legal uncertainty This means that companies have privileged other markets when making their investments in low-emission assets.

Particularly important was the result of the last public auction of renewable capacity, in which the majority were abandoned due to lack of interest from investors.