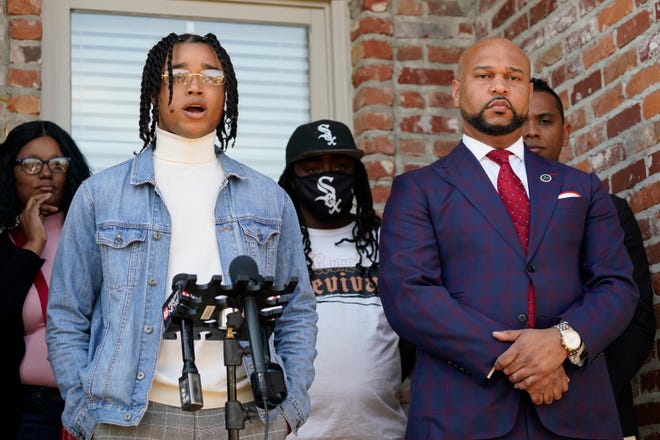 Two white men were arrested this week after a Black FedEx driver in Mississippi accused them of chasing and shooting at him as he tried to drop off a delivery — a case that has drawn comparisons to the 2020 killing of Ahmaud Arbery.

Gregory Case and his son Brandon Case were arrested Tuesday in connection with the Jan. 24 incident. The elder Case faces a charge of conspiracy while Brandon Case is charged with shooting into a motor vehicle.

D’Monterrio Gibson, 24, accused the men of pursuing him because he is Black, and Gibson’s attorneys are asking for the men to face federal hate crime charges.

“Black drivers are afraid to deliver packages in certain neighborhoods,” Carlos E. Moore, one of Gibson’s attorneys, said at a Thursday news conference, adding that many Black delivery drivers across the country have shared similar experiences with him since the Jan. 24 attack.

“This was racism plain and simple,” Moore added. “No ifs, ands or buts about it.”

Gibson’s lawyers say the case is similar to the 2020 murder of Ahmaud Arbery, a 25-year-old Black man who shot and killed after being chased by three white men through a Georgia subdivision. The three men, including a father and son, were sentenced to life in prison after being convicted of murder this year. The men were also charged with federal hate crimes.

We all have a unique perspective: Sign up for This is America, a weekly take on the news from reporters from a range of backgrounds and experiences.

“On the heels of the death of Ahmaud Arbery, we could have had the same situation here,” said James Bryant, a California-based attorney assisting with the case.

Gibson said hearing about the similarities between his case and Arbery’s gave him the courage to speak publicly.

“At first, I was reluctant about speaking up but then I realized it was bigger than me,” he said at the news conference.

“It’s by the grace of God that he’s alive to tell this story,” Moore said. “So many like Ahmaud Arbery and others were not able to tell their stories.”

Gibson said he arrived in the neighborhood in Brookhaven, Mississippi, about 55 miles south of Jackson, around 7 pm before he pulled into a driveway to drop off a package.

As he began to exit the driveway in his van, Gibson saw a white pickup truck pull away from another house on the lot. Gibson said the truck driver tried to cut him off as he exited the driveway, causing Gibson to swerve around him. Then, he said another man was standing in the street and pointing a gun at Gibson’s vehicle.

Gibson said the man shot at his vehicle as he drove away, and the white pickup truck chased him for about seven minutes until he got onto a nearby interstate highway.

Gibson said the man fired four or five shots but he found several more bullet holes in the van when he returned to the FedEx location. After the incident, Gibson called police and filed a report, he said.

Gibson told reporters he had with FedEx uniform on at the time of the shooting. While his van was rented by FedEx, he said it did not have a FedEx logo on it. He said he had “no interaction” with the men before the shooting, adding that “it came out of nowhere.”

Moore said it is common for FedEx to rent vans that don’t have the company’s logo on it.

“We have not heard one time that a white person who works for FedEx was assaulted or chased like this,” he said. “This has everything to do with racism, not because the vehicle was unmarked.”

Moore said the suspects – Brandon Case, 35, and his father, Gregory Case, 58 – turned themselves in to police Feb. 1, the Mississippi Free Press and the Washington Post reported. The attorneys representing the Cases — Terrell Stubbs for the father and Dan Kitchens for the son — did not immediately respond to requests for comment.

When asked why the Cases weren’t arrested until more than a week after the incident, Brookhaven Police Department Chief Kenneth Collins told CNN that investigations take time.

Collins did not respond to several USA TODAY requests for comment.

Gibson’s lawyers say the Cases were undercharged for their connection to the shooting, adding that they believe hate crime charges are warranted. Moore said he wants the Cases “to be immediately arrested for attempted murder” as well.

A US Department of Justice spokesperson confirmed to the Associated Press on Thursday that the department had received a request to review the case.

Moore said FedEx’s response to the incident was also “less than optimal” because Gibson’s managers put him on the same route the next day. After two days, Gibson “couldn’t bear it,” Moore said, so his managers sent him home without pay. But Moore acknowledged that FedEx is paying for Gibson’s therapy.

“FedEx takes situations of this nature very seriously, and we are shocked by this criminal act against our team member, D’Monterrio Gibson,” FedEx said in a statement to USA TODAY. “The safety of our team members is our top priority, and we remain focused on his wellbeing.

Gibson said he had been experiencing “a lot of anxiety and trauma” since the incident.

“Another thing that people don’t take serious these days is the mental health of Black men in America,” Gibson said. “They think we’re so strong because we’ve been through so much but we hurt too.”

Gibson said he had never experienced racism to this extent before and said he is “looking at everything way different now because I’m realizing there’s still parts of Mississippi that is racist.”

“It’s really scary that you could just die, doing your job,” he said.