Blinken attended the G-7 meeting amid growing tensions with Russia, China and Iran 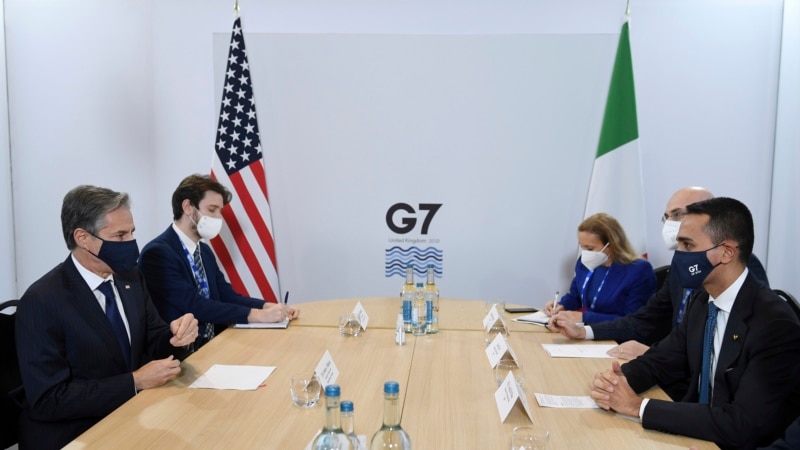 U.S. Secretary of State Anthony Blinken is taking part in talks between the Group of Seven foreign ministers in Liverpool on Saturday following a call by British Foreign Secretary Liz Truss to unite against authoritarianism.

Truss’s call came as ministers from the world’s richest democracies, unofficially known as the G-7, were discussing the mobilization of troops along Russia’s border with Ukraine, including Iran’s nuclear ambitions and the military occupation of Myanmar.

“We must unite resolutely to counter the aggressors who seek to limit the boundaries of freedom and democracy,” Truss said as he opened the two-day session, without mentioning specific states.

The top U.S. diplomat met with Truss and their counterparts in France and Germany on Friday to discuss how to develop Iran’s nuclear talks. Blinken will meet separately with the foreign ministers of Japan, Italy and Australia on Saturday.

Blinken will also hold a series of personal meetings with the Association of Southeast Asian Nations (ASEAN) foreign ministers as part of his December 9-17 visit to Indonesia, Malaysia, Thailand and Hawaii.

Blinken’s visit is part of a U.S. effort to further develop a “strategic partnership” with ASEAN, as President Joe Biden’s administration aims to launch a new “Indo-Pacific Economic Framework” in early 2022.

This is the first time ASEAN countries have been included in the G-7 meeting of foreign and development ministers in Liverpool.

Top diplomats are discussing China’s efforts to increase its influence in the Indo-Pacific region, as well as Russia’s troop increase in Ukraine and the global coronavirus pandemic.

Daniel Kritenbrink, Assistant Secretary of State for East Asian and Pacific Affairs, told reporters at the briefing: “The Secretary will have the opportunity to discuss the President’s newly announced Indo-Pacific economic system. “President Biden is committed to raising US-ASEAN cooperation to an unprecedented level,” he added.

Indonesia is the most populous Muslim country in the world. Kritenbrink told VOA on Wednesday that Blinken will visit a vaccine clinic hosted by Indonesia’s largest religious-based NGO.

Blinken will then travel to Malaysia and Thailand, where he will develop U.S. ties and address common challenges, including combating COVID-19, building sustainable supply chains, tackling the climate crisis, and building a free and open Indo-Pacific region. tries to mince.

State Department Blinken said during his long trip that each country would “consider the worsening crisis” in Myanmar. In Myanmar, the military, formerly known as Burma, seized power in a coup in February and overthrew the civilian government.

U.S. officials noted that the new economic system of the Indo-Pacific region will include extensive cooperation with countries in the region in key areas such as the digital economy and technology, supply chain stability and clean energy.

“The Indo-Pacific region is an important part of our economy. It alone accounts for more than half of the world’s population and 60 percent of global gross domestic product” (gross domestic product), said Jose Fernandez, Secretary of State for Economic Growth. ‘Deputy, energy and the environment, he said at a recent briefing.

“Seven of the U.S.’s 15 largest export markets are in the Indo-Pacific region. Bilateral trade between the U.S. and the region has exceeded $ 1.75 trillion,” he added.

However, there are concerns that the U.S. is lagging behind China in deepening economic and strategic ties with ASEAN.

“ASEAN countries want more from Washington economically, but the Indo-Pacific economic system proposed by the Biden administration may be lower than they expected,” said Susanna Patton, a researcher on U.S. foreign policy and defense programs. Research Center in Sydney.

“Once the RCEP enters into force, there will be two megatrade pacts in Asia: the RCEP and the CPTPP and the United States are none,” Patton said. pointing to the agreement. .

In November 2020, 10 ASEAN member states and five other countries (Australia, China, Japan, South Korea and New Zealand) signed the RCEP, which accounts for 30% of world GDP and population. The RCEP will take effect in January.

Others argue that the new Indo-Pacific economic basis is only tied to traditional trade, as Washington points to strategic interests in the region.

Wayne Lee contributed to this report. Some information for this report was provided by Agence France-Presse, the Associated Press and Reuters.