Boys hockey: Cretin-Derham Hall is state bound for the first time since 2009 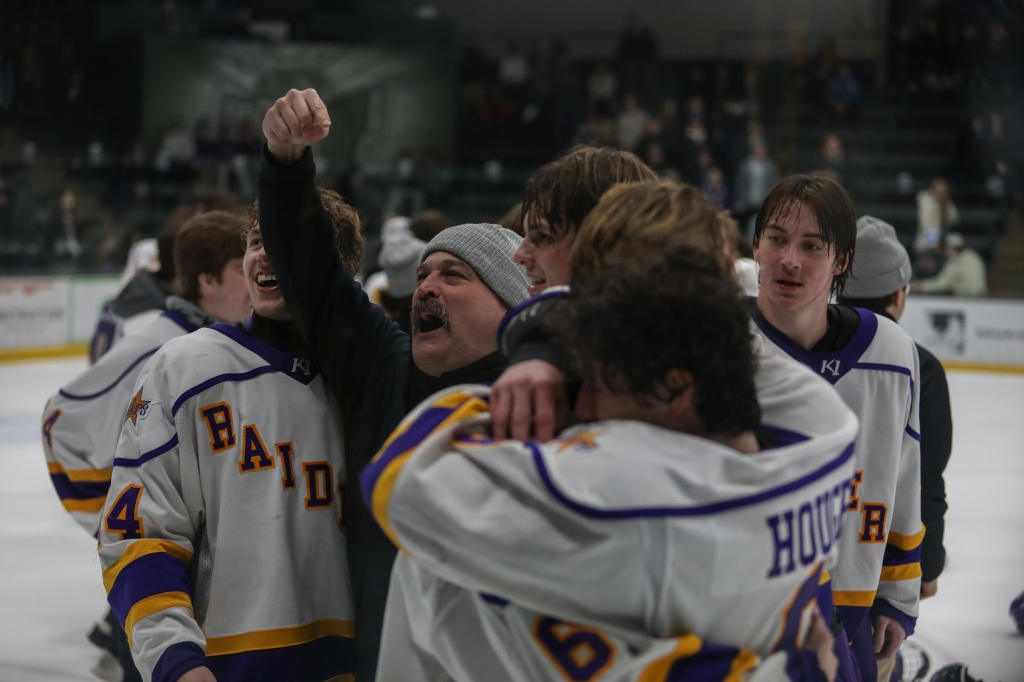 For much of the season, Cretin-Derham Hall has been at or near the top of the state Class 2A boys’ hockey poll.

The Raiders will next get a chance to further prove their lofty ranking on the game’s biggest stage.

“I’ve been dreaming about this moment ever since I knew what the state tournament was, ever since I was 5 years old, started playing hockey,” said Drew Fisher, who scored twice in the Raiders’ 3-0 win over Eastview in the Class 2A, Section 3 title game Thursday at a sold-out Braemar Arena.

Marko Belak stopped 35 shots for his third shutout of the season, and Gabe Rasmussen also scored for top-seeded Cretin-Derham Hall, state bound for the first time since 2009.

“Long overdue,” said defenseman Zach Sondreal. “… This is a group that came here freshman year, like 11 or 12 of us came together with the same dream. We’re going there next week.”

“We finally made it happen, but it’s not over yet,” Fisher said.

The Raiders will play Thursday at the Xcel Energy Center. Brackets are to be announced Saturday.

The past two Cretin-Derham Hall seasons ended in the section semifinals.

“We talked about that last year in the locker room, about let’s not let that happen again, but we’ve got a long process until we get there in March. We’ve been talking about this game for a long time. It finally came and the boys delivered,” said coach Matt Funk.

Cretin-Derham Hall (24-3) has won 18 straight games, giving up more than two goals just twice in that span of success.

“We just ran into a buzzsaw,” said coach Aaron Fulton, acknowledging the Raiders’ speed, especially in transition, proved somewhat troublesome. “We were able to get some chances but not enough to sustain anything.”

After a scoreless first period that had plenty of up-and-down flow — along with 26 combined shots on goal — the Raiders’ top scorer broke through less than two minutes into the second.

A shot from near the left boards was not covered properly, allowing Fisher to get two whacks at the puck to put it in. One of 10 Mr. Hockey finalists, Fisher has 28 goals among his 59 points this season.

Belak, a finalist for the Frank Brimsek Award that honors the state’s top senior goaltender, robbed Tanner Kronberg in opening minute of the third period to keep the one-goal lead.

“We’ve been calling him Frank,” Funk said. “… That was the 60th win of his career here at Cretin. He will graduate the best goalie in Cretin-Derham Hall history, and that’s saying a ton.”

“Marko’s 100% the best goalie in the state. No doubt about it. He kept us in this game, he made some unbelievable saves. When we were getting buzzed, we always trust Marko,” Fisher said.

Rasmussen added an insurance goal 5:38 into the frame.

“We needed it bad. We knew we had it going into the third, but that kind of gave us a little relaxation in there,” said Rasmussen, who injured his ACL playing lacrosse last summer and was supposed to be out about eight months. He was back just before Christmas.

“A lot of the boys look up to him; he’s one of the leaders of that third line. … It was an unbelievable goal and the dagger of the game,” said Fisher, who added an empty-net goal.

Found habitable place for humans on the Moon, interested?

Ruckus for World Cup figures: They go to market with scales and weigh envelopes