What happens in the brain as we die has been a source of mystery for centuries, but a new study suggests our lives really do flash before our eyes in our final moments.

Neuroscientists inadvertently recorded a dying brain while they were using electroencephalography (EEG) to detect and treat seizures in an 87-year-old man, and he suffered a cardiac arrest.

It was the first time ever that scientists had recorded the activity of a dying human brain, according to the team.

Rhythmic brain wave patterns were observed to be similar to those occurring during memory retrieval, as well as dreaming and meditation.

This supports a theory known as ‘life recall’ – that we relive our entire life in the space of seconds like a flash of lightning just prior to death.

In fact, the brain may remain active and coordinated during and after the transition to death, and may even be programmed to ‘orchesstrate the whole ordeal’, according to the researchers.

The team recorded a dying brain while they were using electroencephalography (EEG) to detect and treat seizures in an 87-year-old man and the patient suffered a heart attack. Pictured is EEG output over a 900 second period encompassing a seizure (S), suppression of left cerebral hemisphere activity (LS), suppression of bilateral cerebral hemisphere activity (BS), and cardiac arrest (CA). Point of death is CA, coinciding with changes in EEG patterns. FP1, F7, T3 and so on refer to different electrodes of the EEG which are attached or contact in different regions on the scalp of the patient. Left indicates left brain hemisphere, right indicates right brain hemisphere 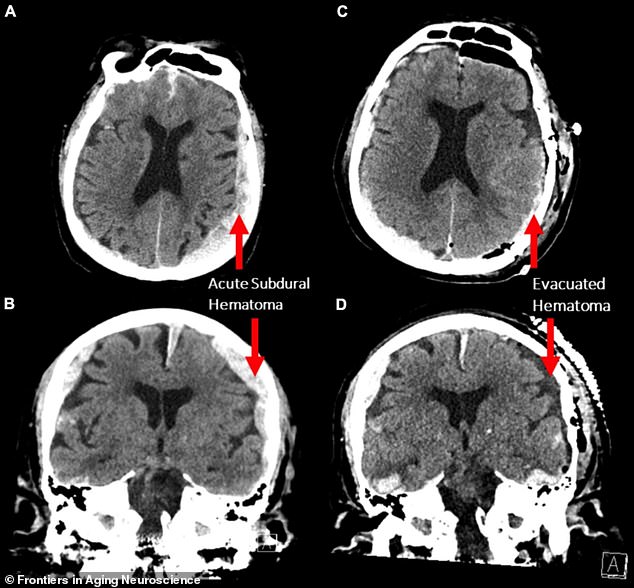 Scientists have recorded the brain activity of a 87-year-old male epilepsy patient while he was dying from a heart attack. Pictured are CT scans of the patient, whose identity was not disclosed. A and B show effects of subdural hematoma – a serious condition where blood collects between the skull and the surface of the brain – with a larger mass effect on the left side. C and D show the same scan sequences after decompressive craniotomy – a surgery to treat the condition

Imagine relating your entire life in the space of seconds.

Like a flash of lightning, you are outside of your body, watching memorable moments you lived through.

This process, known as ‘life recall’, can be similar to what it’s like to have a near-death experience.

What happens inside your brain during these experiences and after death are questions that have puzzled neuroscientists for centuries.

The patient, who is anonymous, was admitted to the Vancouver General Hospital in British Columbia, where neurosurgeon Dr Ajmal Zemmar was working at the time.

The researchers took EEG recordings from his brain before he eventually underwent a fatal cardiac arrest.

EEG is a method of recording electrical activity of the brain that involves electrodes placed along the scalp.

‘We measured 900 seconds of brain activity around the time of death and set a specific focus to investigate what happened in the 30 seconds before and after the heart stopped beating,’ said Dr Zemmar, now based at the University of Louisville, Kentucky.

‘Just before and after the heart stopped working, we saw changes in a specific band of neural oscillations, so-called gamma oscillations, but also in others such as delta, theta, alpha and beta oscillations.’

The different types of oscillations, including gamma, are involved in high-cognitive functions, such as concentrating, dreaming, meditation, memory retrieval, information processing, and conscious perception, just like those associated with memory flashbacks.

‘Through generating oscillations involved in memory retrieval, the brain may be playing a last recall of important life events just before we die, similar to the ones reported in near-death experiences,’ Zemmar said.

‘These findings challenge our understanding of when exactly life ends and generate important subsequent questions, such as those related to the timing of organ donation.’

While this study is the first of its kind to measure live brain activity during the process of dying in humans, similar changes in gamma oscillations have been previously observed in rats kept in controlled environments.

This means it is possible that, during death, the brain organizes and executes a biological response that could be conserved across species. 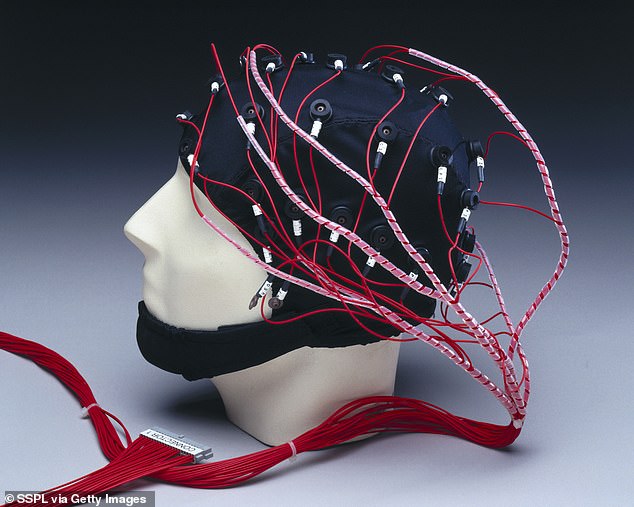 These measurements are, however, based on a single case and stem from the brain of a patient who had suffered injury, seizures and swelling.

This complicates the interpretation of the data, although Dr Zemmar said he hopes to investigate more cases in the future.

‘As a neurosurgeon, I deal with loss at times. It is indescribably difficult to deliver the news of death to distraught family members,’ he said.

‘Something we may learn from this research is: although our loved ones have their eyes closed and are ready to leave us to rest, their brains may be replaying some of the nicest moments they experienced in their lives.’

The study has been published in Frontiers in Aging Neuroscience.

An electroencephalogram (EEG) is a recording of brain activity which was originally developed for clinical use.

During the test, small sensors are attached to the scalp to pick up the electrical signals produced when brain cells send messages to each other.

In the medical field, EEGs are typically carried out by a highly trained specialist known as a clinical neurophysiologist.

These signals are recorded by a machine and are analyzed by a medical professional to determine whether they’re unusual.

An EEG can be used to help diagnose and monitor a number of conditions that affect the brain.

It may help identify the cause of certain symptoms, such as seizures or memory problems.

This has led to the creation and design of a number of futuristic sounding gadgets.

These have ranged from a machine that can decipher words from brainwaves without them being spoken to a headband design that would let computer users open apps using the power of thought.