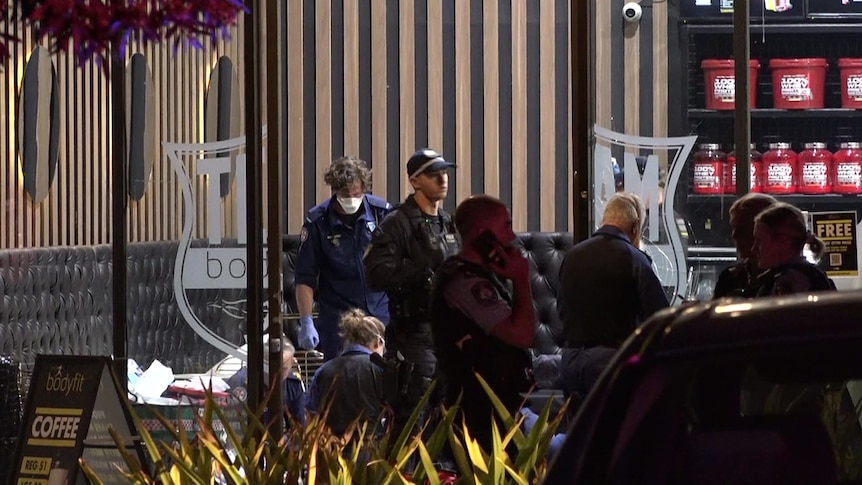 The brother of Comanchero bikie boss Tarek Zahed has died after the pair were shot in the foyer of a Western Sydney gym on Tuesday night.

Both Omar and Tarek Zahed suffered multiple gunshot wounds as they were hit with a hail of bullets at Bodyfit Fitness Center on Parramatta Road, Auburn, just after 8pm.

The men were treated at the scene with Omar, believed to be in his 20s, shot multiple times in the arms, stomach and legs before going into cardiac arrest.

He could not be saved.

Meanwhile older brother Tarek, 41, was shot up to 10 times all over his body, including in the head.

He was taken to Westmead Hospital in a critical condition.

“When we arrived on the scene both patients had suffered significant blood loss and one of them had gone into traumatic cardiac arrest,” NSW Ambulance Inspector Kevin McSweeney said.

“Paramedics did everything they could but despite best efforts, he died at the scene.

“This was an horrific and confronting scene that unfolded in front of several witnesses, it is very fortunate no other members of the public were injured.”

There have also been two car fires on Tuesday night in the south-west Sydney suburbs of Berala and Greenacre.

It is unclear at this stage whether they are linked to the shootings.

The 39-year-old, who had a $1 million bounty on his head, was killed after leaving an associate’s home about 9:30pm at Greenacre.

Ahmad had recently served jail time over the fatal shooting of a man outside a Condell Park smash repair shop in 2016.

Following his death, the police vowed to step up enforcement efforts.

As part of these operations, Tarek Zahed was arrested earlier this month and charged with two counts of contravening a serious crime prevention order.

He was due to appear at Downing Center Local Court on Wednesday, June 22.

Police said investigations are currently underway into this shooting and there are diversions in place on Parramatta Road at Auburn. People are advised to avoid the area.

Officers from the local command are working in conjunction with the State Crime Command’s Raptor and Criminal Groups Squads.

A report is being prepared for the coroner.