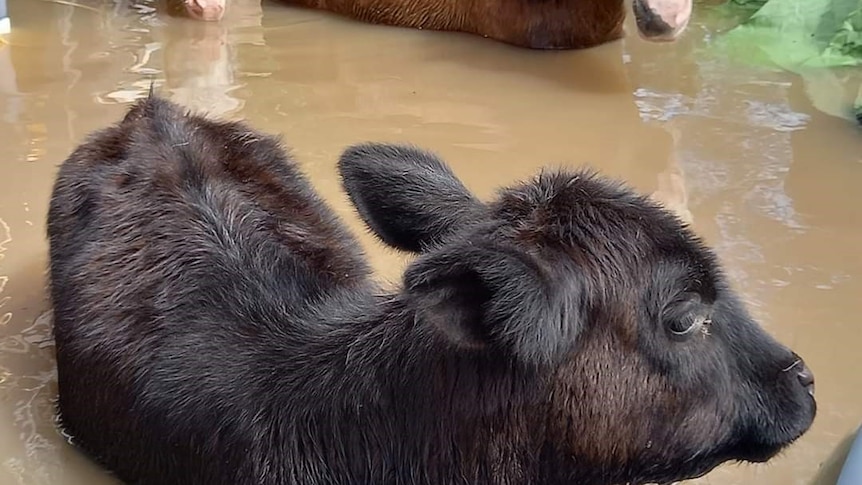 Rainfall and flood records have tumbled across the Northern Rivers leaving its agricultural sector devastated and with a recovery that is far from over.

A lack of sunshine and repeated flooding has hampered efforts in the 10 weeks since the region was first smashed in early March.

The winner outlook is bleak for livestock owners and crop growers who are struggling with waterlogged pastures, paddocks and plantations.

Lismore-based vet Dr Bruno Ros said predictions of a wet winter meant the worst was yet to come.

“We still have dire situations on some farms where cattle are short of feed, they’re now cold, standing in mud and producers are trying to find agistment to send them away,” Dr Ros said.

“Calves are really doing it tough and starting to get pneumonia, the dairy farms in particular.”

He said cattle’s feet couldn’t stand being saturated and then walking on gravel laneways.

“They get lame, they get abscesses,” he said.

“The problem is it starts right from the very top,” Dr Ros said.

“The ag minister Dugald Saunders… is completely clueless as to what is going on and that’s the actual problem,” he said.

He said eligibility for disaster recovery grants was another concern.

Mr Saunders defended his government’s response and said 820 of the 2,500 applications for $75,000 grants had been processed.

“It’s an average of 21 days to turn that around and get that money in the bank, so it’s come down since the peak in March,” he said.

He said there was no magic solution.

“What we’re trying to do is provide a bit of assistance to allow people to get back into their normal routine that sometimes takes much longer than people want,” he said.

“The reality is you can’t always fix that, it’s Mother Nature at its best and worst that sometimes impacts people’s lives in the biggest possible way.”

The macadamia industry has already calculated the season’s losses.

Australian Macadamia Society CEO Jolyon Burnett said the loss of 5590 tonnes of nut would result in more than $21 million being wiped off the value of the national crop.

He said that equated to a 10 per cent reduction in the national crop, which was initially forecast at a record 54,930 tonnes of nut-in-shell.

“At $3.80 or $4 there’s not a lot of margin for the grower left, particularly with rapidly increasing prices for fuel, fertilizer, chemicals, maintenance and repair and purchase of farm equipment,” Mr Burnett said.

While harvest is well under way in Bundaberg, farmers in the Northern Rivers are struggling to get machinery onto orchards to start.

“The longer their nut stays on the ground the lower the quality is likely to be,” he said.

“When you look at the scale of this event… it was apocalyptic (and) you have got a major issue and short and long-term issues for our primary producers,” she said.

Ms Novak said the $3.4 billion flood damage bill calculated by the Insurance Council of Australia could be doubled once impacts on the rural sector were fully realized.

“We’ve got at least 65 commodities in the Northern Rivers, those haven’t all had their impacts done yet, so even your bee, your soybeans, your beef, your sugarcane, those figures aren’t in yet,” she said .

Ms Novak said those sectors had lost millions of dollars worth of crops, cattle, infrastructure and machinery.

She said there had been plenty of opportunity for flodd-affected people in urban areas to engage with assistance but it had been harder for farmers.

“A lot of our farmers always say that others are worse off than them, whereas this time I’m sorry, no, there are just as many as worse off with them because they are struggling, they are in a lot of dire situations, ” she said.