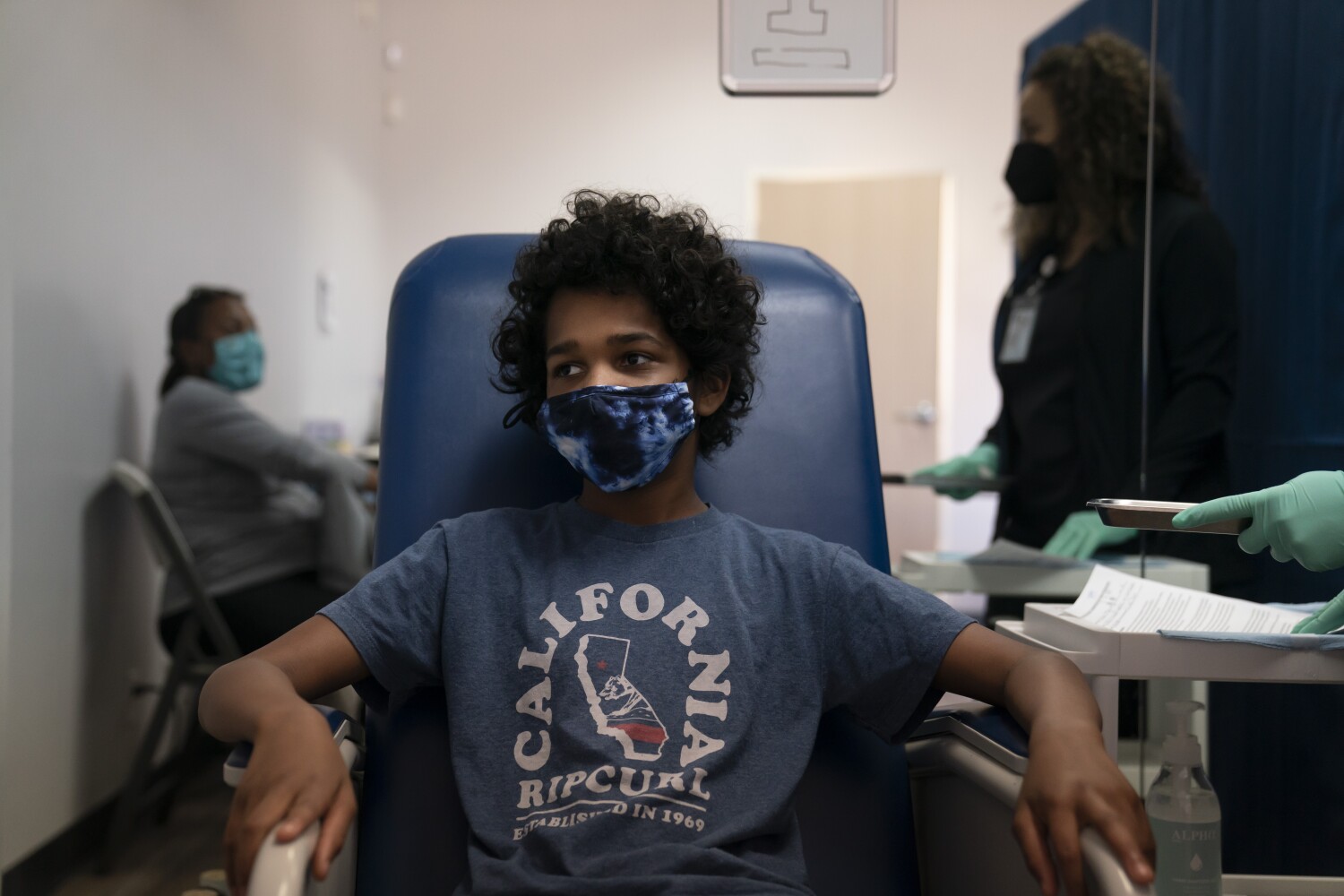 The first COVID-19 shots were expected to be given to children ages 5-11 on Wednesday, as health officials began an ambitious vaccination rollout to vaccinate 3.5 million children in California.

And vaccinations can also be done in pediatric offices and pharmacies.

“We do not expect a shortage and expect that there will be enough vaccine to meet demand,” said Barbara Ferrer, Los Angeles County director of health.

However, it may take some time before clinics reach full capacity.

President Biden said Tuesday in a statement that the government has provided enough vaccines “for every child in America.”

“This will allow parents to end months of worrying about their children and reduce the spread of the virus among their children,” Biden said. “This is a big step forward for our country in the fight against the virus.”

For those interested in vaccinating their young children this week, Ferrer advised to call parents and guardians ahead of time to make sure there are baby doses available at the location.

Vaccines for this age group are specially designed and supplied in orange-capped vials at a dosage that is one third the size of the vaccine for people 12 years and older. The senior dose comes in a different bottle with a purple cap and is not suitable for young children.

In Los Angeles County, about 900,000 children are eligible for the vaccine. The county expects to receive about 300,000 doses over the next 10 days, and ultimately there will be 900 locations across the county offering vaccinations for this age group.

Mobile vaccination teams will also be sent. This month, officials are planning 480 school vaccination clinics in areas of greatest need.

Vaccination is given in two doses three weeks apart. People are considered fully protected two weeks after the last dose, which means that children who start vaccinations by mid-November will be fully protected by Christmas.

The vaccine is free of charge and recipients do not need to be US citizens or have health insurance.

Clinical trials of the vaccine have shown an efficacy of nearly 91% in preventing symptomatic cases of COVID-19 in children aged 5 to 11 who have not previously been infected.

Clinics quickly began offering vaccinations after the director of the US Centers for Disease Control and Prevention, Dr. Rochelle Walensky, formally recommended that children of this age be vaccinated late Tuesday night. Earlier in the day, it approved a 14-0 vote by the Scientific Advisory Committee.

“We know that millions of parents want to vaccinate their children, and with this decision, we have now recommended COVID-19 vaccination for about 28 million children,” Walenski said in a statement.

Vaccinating children is “monumental” in this pandemic, Walenski told an advisory committee earlier Tuesday. While COVID-19 is less likely to cause death in young children than in adults, it is far more dangerous than other diseases for which vaccines exist.

For example, five years before the chickenpox vaccine was recommended for children, the virus caused an average of 16 deaths per year among children aged 5 to 9 years. In contrast, 66 children aged 5 to 11 died from COVID-19 in the 12 months ended October 2.

This death rate has made COVID-19 the eighth leading cause of death among children in this age range.

Children infected with the coronavirus also have a rare risk of developing a serious condition that usually requires hospitalization. The disease – Multisystem Inflammatory Syndrome in Children or MIS-C – causes inflammation of parts of the body, including the heart, lungs, kidneys, brain, skin, eyes, and / or gastrointestinal organs.

Nationwide, 5,217 reports of MIS-C were received, 46 of which ended in death. California has recorded 690 reports of MIS-C, six of which have been fatal. 60% to 70% of patients with MIS-C require intensive care.

The median age for those with MIS-C in California is 8 years.

“Fortunately, such severe outcomes are usually rare. The chances of a child developing severe COVID, requiring hospitalization or developing a long-term complication such as MIS-C remain low, Walenski said. “But the risk is still too high and too destructive for our children, and much higher than for many of the other diseases we vaccinate children against.”

In addition to the clinical effects on children, Walenski said vaccines have the potential to mitigate other debilitating effects of the pandemic, including social and mental health.

“For almost two full years, fundamental changes have taken place at the school. There are children in the second grade who have never had a normal school year, ”she said.

“We watched the education gap in this country widen as the virus disproportionately affected racial and ethnic minority communities. Pediatric vaccinations can help us change all of this and bring us closer to the schools we once knew and hope it can be – as a safe and enriching environment for all of our children. ”

California health officials remain concerned about the possibility of a fifth wave of the pandemic, as people spend more time indoors with colder weather. Vaccination rates in California, while relatively high compared to other states, are still too low to prevent significant risk of transmission.

When the Delta variant swept through California this summer, young children became the group with the highest weekly coronavirus incidence in Los Angeles County, largely because vaccines were not available, Ferrer said.

While health officials strongly advise children to get vaccinated, there is one significant side effect they see following vaccinations, especially among boys 12 and older: myocarditis, inflammation of the heart.

Even when post-vaccination myocarditis does occur, the data show that it is much more benign than other forms of myocarditis and resolves quickly after recreation.

There have been no confirmed reports of post-vaccination myocarditis as a cause of death among cases that have been fully explored, Dr Matthew Oster, a pediatric cardiologist at Children’s Health Atlanta who advised the CDC’s advisory committee, said ahead of Tuesday’s vote.

There have been encouraging results from studies of the long-term effects of post-vaccination myocarditis. Of the approximately 47 patients, 91% were considered fully or likely fully recovered by their doctor, Oster said at a committee meeting on Tuesday.

Clinical trials in children aged 5 to 11 years have not revealed cases of myocarditis after vaccination. But since the study is, by definition, relatively small, officials will continue to monitor post-vaccination side-effect reports as vaccinations become available.

Based on what is known, Oster said he suspects post-vaccination myocarditis will eventually be even less likely among children aged 5 to 11 than among adolescents and young adults.

Oster said that parents of children with congenital heart disease ask him if these children should be vaccinated. He recommends doing this because children will be at a much higher risk of severe illness if they become infected with COVID-19.

Available data indicate that there is no increased risk of post-vaccination myocarditis in people with preexisting heart disease; In contrast, children with congenital heart defects and severe COVID-19 are more likely to need intensive care, Oster said.

“The bottom line is that getting COVID is, I think, much more dangerous to the heart than getting this vaccine,” he said.