Call for the definitive closure of secret bars 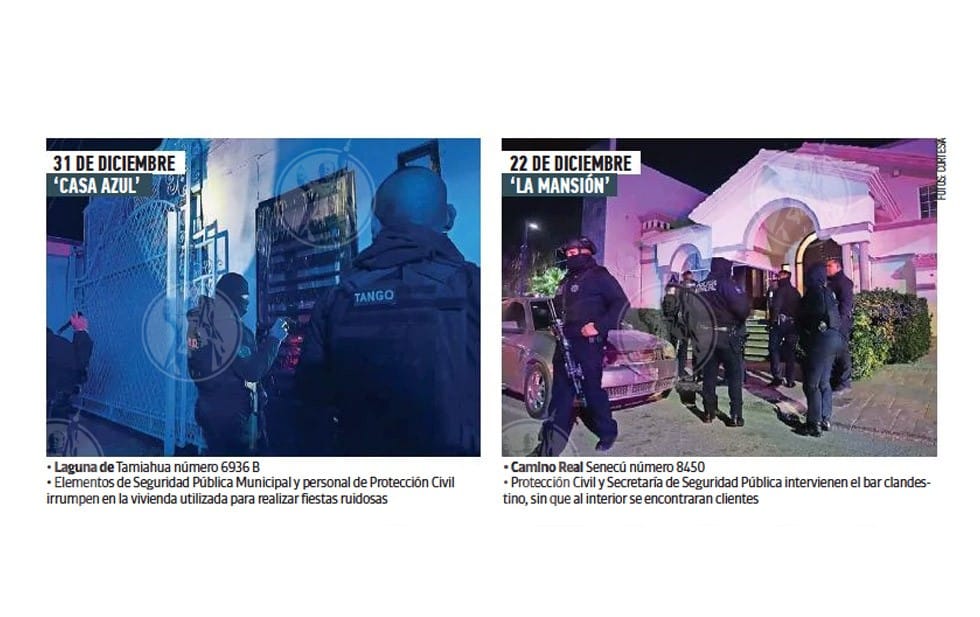 juarez city– With an intervention carried out in the first minutes of Saturday, elements of the Municipal Secretariat of Public Security (SSPM) remained outside the secret bar called “Casa Azul”, located on 6936 B Laguna de Tamiahua street, in order to avoid its operation. permanent basis.

The head of the corporation, Cesar Omar Muñoz Morales, said he would maintain permanent surveillance, as would another illegal business of the same type, identified as “La Mansión”.

After the police action, the residents of the Mexico subdivision were confident that the scandalous weekend would end and thanked the police intervention, as since last year they had condemned illegal activities without positive results.

“This is an example of public condemnation, of the authority supporting the citizen. Now we only ask you to maintain the vigil,” said José Antonio Hernández, which took place after two o’clock and ended after eight o’clock in the morning. Wali was influenced by scandalous parties.

The secretary said that when the operation arrived, they did not enter the property as no one opened the door to allow them to enter.

“We don’t have a search warrant, so we stayed outside. I can assure the neighbors and the community that this house will never again serve as a secret bar, nor will La Mansion on Camino Seneca Street. We are going to have permanent surveillance and we trust that the residents of the sector are attentive and report suspicious activities to us,” said Muñoz Morales.

the police arrive at dawn

Elements of the Municipal Public Security Secretariat (SSPM) and Civil Defense personnel went to “Casa Azul” on Saturday morning, a business that operated in secret for more than a year and that has led to frequent complaints from residents of Mexico Subdivision. The head of the institution, Cesar Omar Muñoz Morales.

At 12:30 am, police from the K-9 group, in addition to some 60 agents from all police districts, arrived in the San Lorenzo area to intervene at a house in the Laguna de Tamiahua street, which served as an after-sales service. . Where he put security cordon and inspected.

The chief of the city police said that the operation was carried out in response to complaints from local residents due to excessive noise.

He said this is the second operation against illegal lounges where parties are held after hours, where there is no operating permit and where it is believed that the state liquor law has been violated.

They Finally Heard Us: The Neighbors

One of the main problems faced by the residents around the so-called “Casa Azul” or “Pool Party”, as this property is known in the Mexico subdivision, was the behavior of the customers.

Because illegal businesses lacked parking, parked at well-established businesses late into the night, trespassed on driveways, or double-filed.

When trying to leave in the morning, people were stuck outside their homes due to the arrival of vehicles. Another conflict was with the parking lots of nearby businesses, as they suffered from foul odors caused by the vomit and urine of intoxicated attendees.

Another problem was the noise of the music which continued till morning. This set of odd circumstances irked the neighbors, who decided to make their complaints public, which were dealt with by the Municipal Police and Civil Defense.

Customers of both businesses commented on condition of anonymity that both secret bars were a “great deal” due to the number of people who came to hang out after the legally operated establishments were closed.