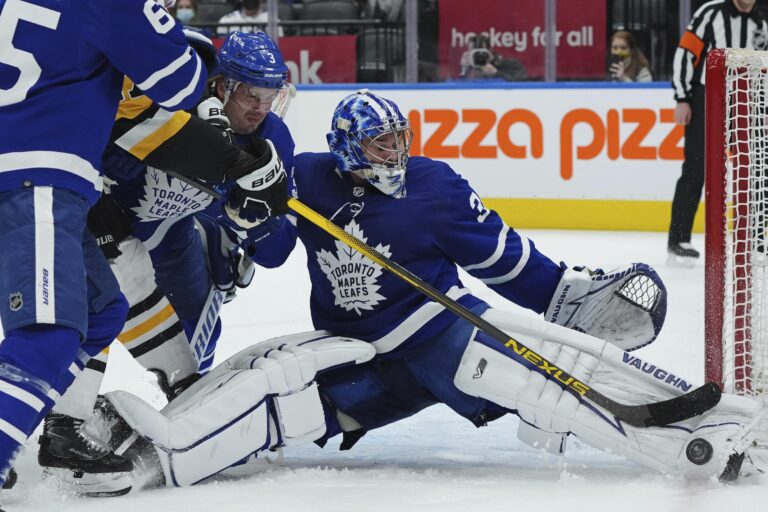 TORONTO ( Associated Press) — Morgan Rielly and Auston Matthews each had a goal and an assist, and Jack Campbell made 45 saves to lead the Toronto Maple Leafs to a 4-1 win over the Pittsburgh Penguins on Thursday night.

David Kampf and Michael Bunting also scored for Toronto, which was outshot 46-29 but won its second straight.

Matthews ran face-first into the crossbar of the Maple Leafs net as he pursued Penguins captain Sidney Crosby with 13:19 remaining in the third period.

Doubled over and holding his face, Matthews left the game but returned with five minutes left. Moments before his mishap, he set up Bunting for Toronto’s fourth goal, less than three minutes after Malkin scored on a rebound to break up Campbell’s shutout bid.

Campbell put forth his best outing in weeks, keeping a red-hot Crosby and the Penguins at bay. Even with the defeat, Pittsburgh has gone an impressive 14-4-3 since the start of the new year.

On Tuesday, Crosby scored his 500th career goal in a win at home against the Philadelphia Flyers.

Matthews needed 21 seconds to extend his point streak to nine games. He took a pass from defenseman TJ Brodie and beat Jarry on the short side.

The breakaway goal was Matthews’ 33rd. He has collected eight goals and 17 points during his nine-game offensive spree.

Rielly increased the Maple Leafs to 2-0 with a breakaway, power-play goal. Instead of dropping a pass to either Mitch Marner or Matthews in the neutral zone, Rielly kept the puck. He sped past Penguins forward Brian Boyle and then split the defense for the goal.

Pittsburgh entered the game with the second-best penalty-killing unit in the league, while the Maple Leafs have the most efficient power play.

The Maple Leafs showed off their stingy penalty kill with a short-handed goal from Kampf late in the second period. The puck caromed to Rielly in the neutral zone after Campbell made a handful of stops with the Penguins on the power play. Rielly sped into the offensive zone to set up Kampf on a two-on-one rush.

Pittsburgh: Host Carolina Hurricanes in opener of a three-game homestand.