Canucks let down by ineffective power play, top six in loss to Lightning 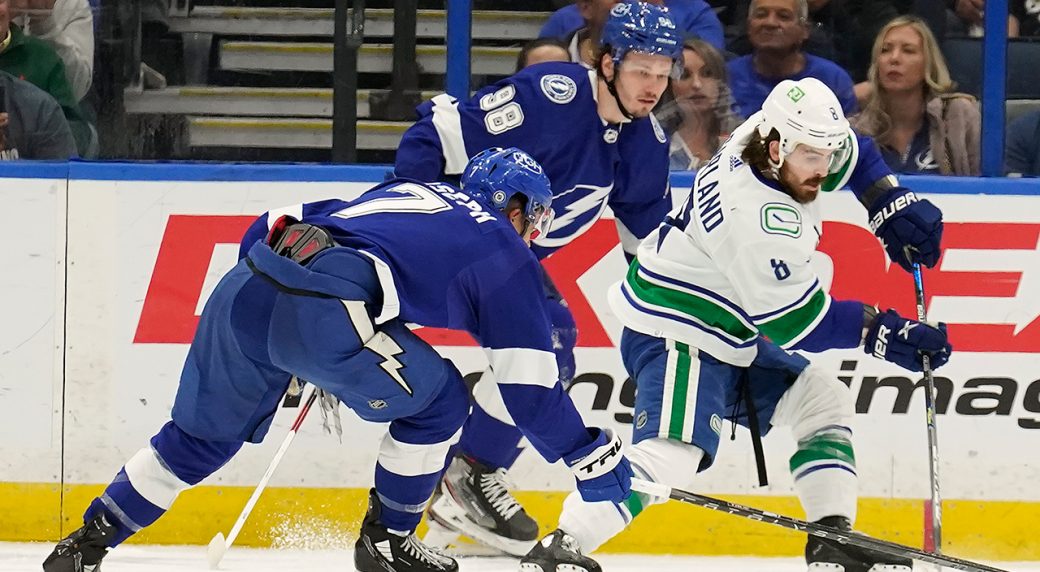 Turns out Alligator Alley is as pleasant as it sounds – especially when you’re making the trip on foot, through the swamp in flip flops, dangling pork hocks from your pockets.

In crossing the grating state of Florida for road games against the NHL’s best two teams, the Tampa Bay Lightning and Florida Panthers, the Vancouver Canucks played as well as anyone could reasonably expect given the unideal preparation of a nine-day layoff.

The Canucks scored twice in each game and outshot the Stanley Cup contenders, limiting the two-time champion Lightning to just 21 shots on Thursday. Tampa had 11 even-strength shots through two periods.

But the Lightning still beat the Canucks 4-2, two nights after the Panthers dumped them 5-2.

In Sunrise, Fla., it was a pair of Vancouver lulls that allowed quick-strike, two-goal outbursts by Florida to sink the Canucks. And on Thursday, across Alligator Alley and up the Gulf Coast, it was a futile power play that hurt them as much as Lightning goalie Andrei Vasilevskiy.

At even strength, the Canucks slightly outplayed the Lightning. But the Tampa power play generated an early goal for Steve Stamkos, and the Vancouver power play was 0-for-4 and forced only one actual save from Vasilevskiy.

Let’s accept that the Canucks, who started the season 6-14-2 but hadn’t lost in regulation under new coach Bruce Boudreau until the team ventured to Florida, simply aren’t as good as the Panthers and Lightning. But the Canucks can compete – as they showed this week.

But to actually win these games, Vancouver needs to be closer to perfect. There is little or no margin for error for the Canucks if they hope to win any games on this five-game exam that continues Saturday afternoon in Carolina against the NHL’s No. 3 team, the Hurricanes, who will be all fired up after getting embarrassed 6-0 Thursday by the Columbus Blue Jackets.

“Definitely the margin of error is really little,” fourth-line winger Matthew Highmore, whose first-period goal briefly lifted the Canucks into a 1-1 tie, told reporters on Zoom. “They’re tight-checking games, they’re not wide open. You have to take your chances when you get them. We’re knocking on the door. We didn’t get the win last night or tonight, but we have to continue to do the right things.

“Honestly, I think urgency from a month ago and to the end of the year is going to be the same. We need to win, and we’ve got to find a way on this road trip to get some wins.”

It would help if the Canucks’ best line on Saturday is not Highmore, Juho Lammikko and Tyler Motte – the energy trio who have generated three of four Vancouver goals on this trip.

“I thought they played great,” Boudreau said of his fourth line. “But they can’t be our best offensive line out there. We’ve got to get more production and, at the same time, play the same way. I thought we were really good tonight. It’s not a victory, and I’m not happy about not winning the game. But if you look at the points of us playing well, I thought there was a lot of good things.”

The power play was not one of them. Reborn after the Canucks coaching change five weeks ago, the power play felt like November on Thursday. It was dismal at critical moments – like at the start of both the second and third periods when there was clean ice and rested players, and late in the final frame when a Lightning penalty for too many players gave Vancouver a chance.

Motte scored brilliantly at 15:46, reversing his stick between his legs to bring the Canucks within 3-2, but Brayden Point scored past Quinn Hughes and into an empty net with 1:16 remaining.

Boudreau was displeased by the power play, which finished 0-for-7 in Florida.

“I thought we were much better than the other night for sure,” Boudreau said, now trying to work out of his first losing streak with the Canucks. “Anytime you can limit that team to 21 shots. , , I think you’ve done a good job. But at the same time, we have opportunities and we have four power plays and we don’t get anything. That’s my fault for putting the same guys back out there all the time. But I mean, I think that’s got to get better. We’re a team that needs to have some success on the powerplay and we didn’t get it.”

Asked about the lack of shots, which evoked uncomfortable memories of the Canucks’ awful start, Boudreau said: “I’ve always been in favor of a shooting power play. We don’t have the guy with the bomb from the point but, at the same time, if you shoot and you get inside on the power play, you’re going to score goals. You’ve just got to get pucks through, and I think sometimes we’re trying to be too cute. And that’s got to change.”

They actually have a guy with a bomb in Pettersson, but the Swede’s ferocious one-timer is just a rumor to Boudreau, who deployed the struggling star in front of the net on the power play and on Horvat’s left wing at even strength.

Pettersson, who was in COVID quarantine last week, has a single assist over his last five games, and just six shots on target in the last four.

“I thought he did a good job at left wing,” Boudreau said. “He had two partial breakaways and he set up a couple of really good plays. I would have bet money after about a period and a half that he was going to break through, and he didn’t. But sometimes you don’t break through on your first chance when you play a good game; it’s your second or third game.”

On this trip, against these opponents, the Canucks don’t have the luxury of waiting on their best players.

COVID: Both US gymnast and basketball player who tested positive before Olympics were vaccinated

US officials defend deportation of Haitians from Texas city