Captured on camera: Impressive avalanche of the moment rushes towards tourists during Kyrgyzstan journey 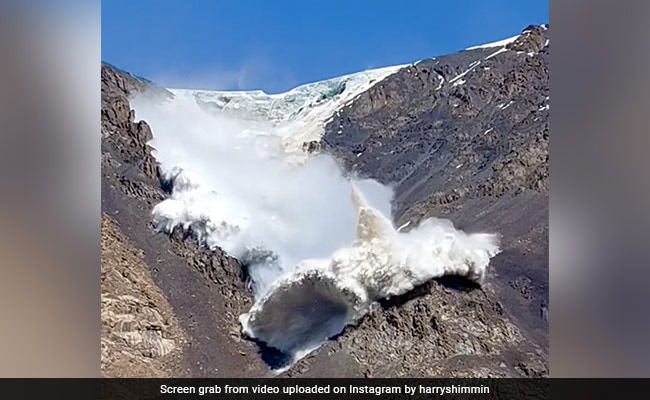 The tourists were in the Tian Shen Mountains in Kyrgyzstan where the avalanche took place.

A group of British and American tourists survived an avalanche in the Tian Shen Mountains of Kyrgyzstan. Snow fell on them, according to footage of the incident posted on social media by one of the tourists. The avalanche was caused by a glacier that collapsed on top of the mountain where they were walking. The group included nine British tourists and one American, according to The Guardian. All the tourists survived the avalanche, although one woman cut her knee and was rushed to the nearest hospital on horseback.

Footage of the ice avalanche heading towards the group was captured by Harry Shimmin, one of the tourists who had escaped the guided tour to take pictures.

“While I was taking pictures, I heard the sound of deep ice breaking behind me. I knew the rest of the group was further away from the avalanche so it should be okay,” he said on Instagram posting the video of the avalanche.

The tourist said he had been there for a few minutes “so I knew there was a place for shelter right next to me”.

He said that if the group had walked another five minutes on the walk, “we would all be dead.”

“Once it was over, the adrenaline hit me hard. I was just covered in light powder, not a scratch. I felt dizzy,” Shimmins said.

After surviving the incident, the entire group was laughing and crying, Shimmins said, adding, “It wasn’t until later that we realized how lucky we were.”

The video, uploaded just a day ago, has been viewed over 1,86,000 times. It was always posted on Reddit, where the video received over 88,000 votes.