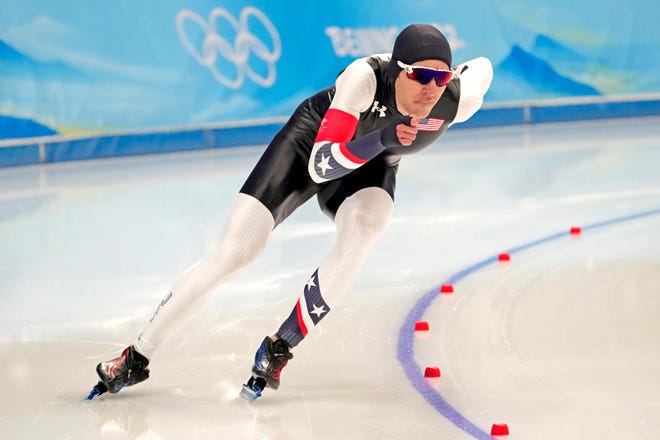 BEIJING — The first flight of Casey Dawson’s crazy journey left Salt Lake City, Utah at around 8 am local time Sunday. Which was around 10 am in Atlanta, where he traveled first. Or 4 pm in Paris, where he had to switch planes. Or 11 pm in Beijing, where he was scheduled to race in, oh, about 44 hours.

And if you think that’s crazy, here comes the kicker.

“I got here this morning and all of my bags were not here,” the US speedskater said.

That’s relevant because those bags were carrying, among other things, his skates.

“It’s the cherry on top of this whole situation,” Dawson said, shaking his head.

Given all of that, it’s no surprise that the 21-year-old felt like he’d won by the time he even stepped up to the starting line. More than three weeks after testing positive for COVID-19, and after weeks of producing alternating positive and negative tests, he repeatedly wondered if he would be able to compete in Beijing at all.

Finally, after taking an estimated 45 PCR tests, Dawson got enough negative results in a row to board a plane. He raced 11,343 miles around the world, then 1,500 meters around the National Speed ​​Skating Oval in Beijing, while wearing a Latvian’s borrowed skates. He finished second-to-last in the event. He doesn’t care much.

“Stepping to the line was the biggest thing for me,” Dawson said. “I didn’t think I was going to get to the line in the first place.”

On Thursday, the Utah resident wrote on Instagram that he would not be competing in his two individual races. He didn’t think it would be possible.

For several days, Dawson had believed he would only need two negative COVID-19 tests taken 24 hours apart in order to travel, per guidelines in the pandemic “playbooks” released by Beijing 2022 organizers. But he said the US Olympic and Paralympic Committee later told him he would actually need four negatives in a row.

“They switched it up on me,” he said.

USOPC spokespeople did not immediately reply to a request for comment.

Dawson described the past few weeks as something of an emotional pendulum, as one test would come back negative, then the next positive. Then negative. Then positive. Back and forth, as his agitation grew.

“Once I got a negative test, I was riding a high,” he said. “But when I got a positive test, I’d be on the ground, just crying.”

Along the way, Dawson also had to deal with a lab snafu. He said he had been taking his COVID-19 tests at a lab that was approved by the Chinese government, but the lab was abruptly removed from the list, voiding his test results. That issue alone set him back “a couple days,” he said.

As the tests piled up, Dawson’s first scheduled individual race – the 5,000 meters – came and went. He scrolled through Instagram, seeing his teammates post footage from the Olympic village. The 1,500 crept closer.

Then, at long last, the fourth test came back negative – and his race to Beijing began.

Dawson took a flight across two US time zones, from Salt Lake City to Atlanta, then back-to-back red-eyes to Paris and later Beijing. He said support staff gave him some simple isometric exercises to keep his blood flowing. He slept a little, but not much. His last flight landed at Beijing’s Capital International Airport just before 6:50 am, almost 12 hours to the minute before his race.

“Usually when you travel that long – I think we waited three days before we skated. Maybe two,” said US teammate Emery Lehman. “So for him to come in, touch the ice and then skate all within 12 hours of landing – and the time change. And the jet lag. And sitting on a plane for that long? It’s something I’m glad I would not have to do.”

After landing at the airport, Dawson took one more PCR test before going to collect his bags. He had packed one Team USA speedskating suit in his carry-on bag, just in case, but most of his gear was in his checked luggage – which was now nowhere to be found.

Dawson headed to the village, knocking on the door of his suite around 9 am, and waited (again) for the results of a PCR test. His coach, meanwhile, started searching for skates, eventually contacting the coach of Latvian skater Haralds Silovs, whose preference in skates was comparable to Dawson’s. “I’m super grateful,” Dawson said.

Opposing skaters described the arrangement as workable but far from ideal.

“No two pairs of blades are the same,” British skater Cornelius Kersten explained. “Everything changes your feel, and how you skate. … Even switching boots from the same bootmaker will give a completely different feel.”

It’s not surprising, then, that Dawson finished 28th out of 29 skaters in the field, roughly six seconds slower than his personal best.

As he spoke with reporters after the race, Dawson said he was running only on adrenaline. He still didn’t know the whereabouts of his luggage, guessing it might be stuck in Paris. Hopefully, he said, it’ll arrive in Beijing before next week, when he’ll skate in the team pursuit – and possibly help the US win a medal.

In this moment, of course, all of that is superfluous. After his 45 COVID-19 tests and 44 hours of travel, all that really matters is that he made it on the ice.

“If I get my luggage or not,” Dawson said, “I’m still an Olympian.”