Cellulose may keep ice cream from getting gritty in your freezer 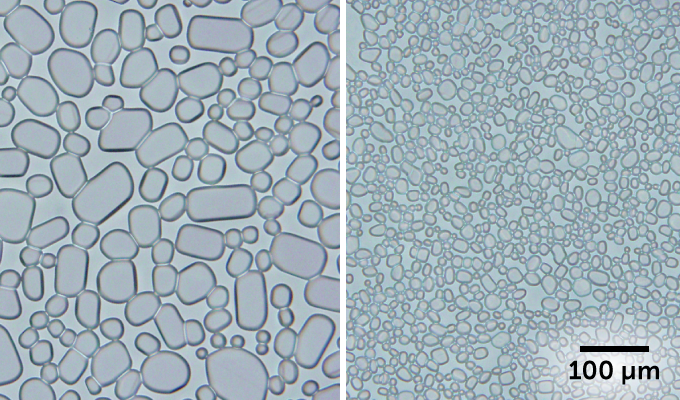 You can never have too much ice cream. But ice cream can be too icy. This happens when the ice crystals in the treat become too large, making it gritty. Researchers now offer a way to prevent this.

Ice cream consists of tiny ice crystals. As that dessert sits in your freezer, the crystals in it will slowly grow. This is partly due to the small temperature change in the freezer, explains Richard Hartel. He is a food engineer at the University of Wisconsin-Madison who was not involved in the new research. The freezer begins to heat up a trifle over time (which is why the motor will restart), even if you haven’t opened its door.

This warming allows the ice to melt a bit before it cools down and freezes again. Smaller crystals melt more quickly than larger crystals. And when they reform, they do so in the form of larger, grittier-tasting crystals. only if ice cream is kept Actually Frigid, Hartel says — as in below -40º Celsius (or Fahrenheit) — will have its ice crystals frozen and small.

To help limit the growth of crystals, companies add substances called stabilizers to ice cream. These are usually gums (such as guar or locust bean gum). And while these do help, they don’t completely stop the growth of ice crystals. Once those ice crystals become 50 micrometers (0.0002 in) in diameter, the ice cream tastes thick and gritty.

Some frogs and other animals produce protein molecules that prevent ice crystals from growing. These “antifreeze” proteins help them survive in sub-zero temperatures. Proteins work by sticking to the surface of ice crystals so that they cannot grow. Antifreeze proteins work better than gums. They are also very expensive.

Tao Wu is a food scientist at the University of Tennessee in Knoxville. He and his team are trying to find better ice cream stabilizers. They have found that cellulose nanocrystals, or CNCs, look promising. Made from processed wood, they cost far less than antifreeze protein.

In one experiment, scientists added CNC to a sugar solution (as an ice cream stand-in). After 24 hours, the growth of ice crystals stopped completely. A week later, the ice crystals were still no bigger than 25 micrometers – so they wouldn’t be gritty. When they used a gum instead of a CNC, the crystals grew to over 50 micrometers in just three days.

Teachers and parents, sign up for the cheat sheet

“This in itself suggests that nanocrystals are much more potent than gums,” Hartel says. If CNCs act like antifreeze proteins, they could be better stabilizers, he says. But more research is needed to confirm this.

Until such new stabilizers hit the market, you still have a good excuse to eat your family’s ice cream quickly.