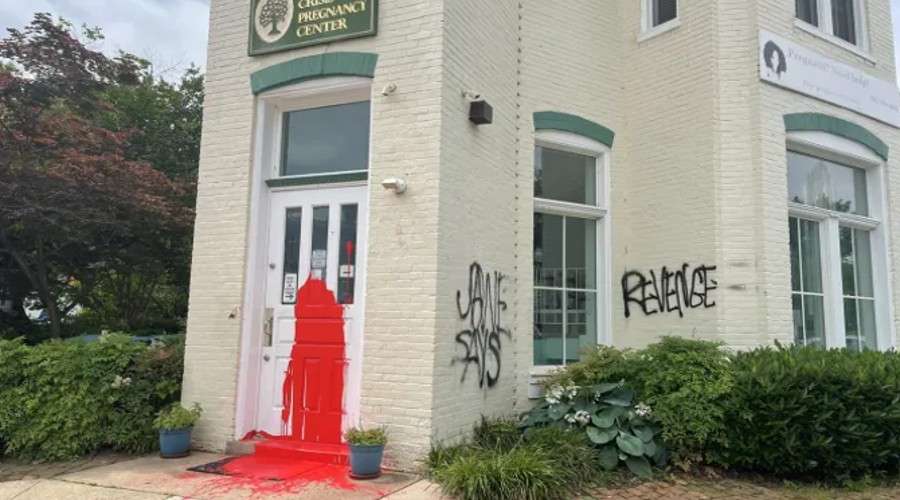 A support center for pregnant women was recently vandalized with pro-abortion messages, linked to a series of similar attacks on pro-life organizations and Catholic Church buildings in the United States.

On June 3, the facade of Washington, DC’s Capitol Hill Pregnancy Center, a Christian nonprofit organization that supports pregnant women in crisis and their families, was painted.

According to the images, almost the entire white door to the building and part of the floor were stained with red paint, and the wall was spray-painted black with graffiti that reads “Jane says revenge.” ), a message commonly used by promoters of legal abortion.

The pro-life center, located in Washington DC, states on its website that it conducts free and confidential pregnancy tests, parenting counseling and classes, and provides accurate and comprehensive medical information on abortion.

Janet Durig, executive director of the Capitol Hill Pregnancy Center, told The Daily Signal that a neighbor called her and notified her of the attack on the building. The vandalism occurred between the night of Thursday, June 2, and the morning of Friday, June 3.

“It’s sad that someone feels like they have to do this when we help so many people,” Durig told The Daily Signal.

Read Also:  This Is New Balance's Most Promising Sneaker (But You Probably Can't Buy It)

This is the latest in a series of attacks and acts of vandalism perpetrated against pro-life organizations and Catholic churches since the beginning of May.

On May 2, the POLITICO website leaked a draft majority opinion suggesting that the Supreme Court could overturn the ruling in the case. Roe vs. Wadewhich legalized abortion in the United States in 1973. If the decision stands, more than a dozen states are expected to immediately ban abortion.

On May 25, the Next Step Pregnancy Center, a help center for pregnant women in Lynnwood, Washington, was smeared with graffiti with similar phrases in English, such as: “Jane’s revenge” and “If abortions are ‘t safe, you aren’t either” (If abortions are not safe, neither are you). In addition, at least five of the building’s windows were broken.

The Archdiocese of Seattle confirmed to CNA that on May 22 the wall of St. Michael Parish, located in Olympia, Washington DC, was smeared with spray-painted phrases such as “Abort the church.”

Puget Sound Anarchists claimed responsibility for the vandalism at St. Michael Parish, as well as attacks on three non-Catholic churches.

On May 14, the Alpha Pregnancy Center located in Reisterstown, Maryland, northwest of Baltimore, received spray-painted threats, which included phrases similar to the other acts of vandalism perpetrated against pro-life centers such as:

On May 8, abortionists vandalized and burned down the Madison headquarters of the Wisconsin Family Action (WFA) pro-life and pro-family center.

“A Molotov cocktail, which did not ignite, was thrown into the building. Also, it appears a separate fire was started in response,” a police report said. In addition, they painted graffiti that read: “If abortions aren’t safe, neither are you”.

Oregon Right to Life noted that Molotov cocktails were thrown at the organization’s offices in Keizer on May 8, causing a small fire. The fire was quickly put out and no one was injured.

In Denton, Texas, near Dallas, the Woman to Woman Resource Center and Loreto House were attacked and vandalized over the weekend of May 7-8.

Translated and adapted by Cynthia Pérez. Originally posted on CNA.