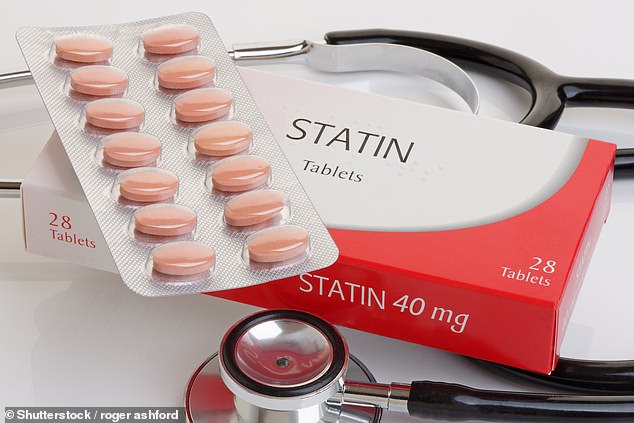 A small study suggests that drinking and eating specially formulated ‘healthy’ snacks may be as good at lowering cholesterol as statins.

Researchers asked 54 people with high levels of ‘bad’ cholesterol to sacrifice two parts of their diet every day.

Instead, they were asked to replace them with snacks produced by a healthier food brand, which included chocolate bars and smoothies.

The participants – who were instructed to swap equally – were told not to make any other radical changes to their lifestyles, but were encouraged to be more active.

After one month, the average person saw their low-density lipoprotein (LDL) cholesterol levels drop by 9 percent. But four participants had a drop of up to 30 percent, similar to the effect of a powerful statin.

The study, published in the Journal of Nutrition, was led by the Mayo Clinic.

The snacks were provided by the American company Step One Foods, containing 110 to 190 calories per serving and providing a minimum of 5 grams of fiber. They were all made from real ingredients, like walnuts, chia seeds and berries.

Study author Dr Elizabeth Claudas, an American cardiologist and founder of Step One Foods, said simple diet hacks could ‘change the health of our nation in 30 days’.

US researchers claim that even small changes in diet using specially formulated cholesterol-lowering snacks and smoothies can reduce people’s levels of bad cholesterol as much as taking statins, in some cases.

This chart shows the individual percentage changes in LDL cholesterol by 54 study participants when they consumed a choice of Step One Foods. The average reduction was 9 percent, although three participants had a reduction of more than 30 percent. It should be noted that some of the participants in the 30-day study also had an increase in their levels of bad cholesterol.

She continued: ‘The implications of achieving such a significant cholesterol effect from a small food-based intervention are profound.’

Cholesterol is a fatty substance that is important for the normal functioning of the body.

But too much of it can build up in the arteries, limiting blood flow to the heart, brain, and the rest of the body, and increasing the risk of angina, heart attack, stroke, and blood clots.

High levels are mainly caused by eating fatty foods, not getting enough exercise, being overweight, smoking and drinking alcohol – but it can also run in the family.

Cholesterol is made in the liver and carried in the blood by proteins and is broadly divided into two types.

Statins are a group of drugs that can help reduce the level of low-density lipoprotein (LDL) cholesterol in the blood.

High levels of LDL cholesterol are potentially dangerous, as it can lead to hardening and narrowing of the arteries, a major factor in heart disease, the biggest killer in the UK.

A doctor may recommend taking a statin if:

Research has suggested that one out of every 50 people who take a statin for five years will survive a serious event, such as a heart attack or stroke, as a result.

There are 5 types of statins available on prescription in the UK:

The drug is not without controversy, however.

Some argue that statins have side effects that can include headache, muscle aches, and nausea, and that statins can also increase the risk of developing type 2 diabetes, hepatitis, pancreatitis, and vision problems or memory loss. The potential benefits are not worth it.

High-density lipoproteins (HDL) carry cholesterol from cells to the liver where it is broken down or passed as waste. This is called ‘good cholesterol’.

Low-density lipoprotein (LDL), the ‘bad cholesterol’, carries cholesterol to the cells, then builds up in excess amounts in artery walls.

A diet heavy in animal fats such as butter, processed meats such as bacon, and coconut oil can raise your bad cholesterol.

Statins are one of the primary ways to treat high cholesterol and an estimated 7-8 million people take them in the UK, and 35 million in the US.

Research shows that one out of every 50 people who take a statin every five years will survive a serious event, such as a heart attack or stroke, as a result.

However, people who take them can experience side effects such as headache, muscle aches and nausea, which for some may not be worth the potential protective benefits.

Co-author Dr Stephen Kopecky, a cardiologist at the Mayo Clinic, said: ‘Many patients who are willing or unable to take statin medications can help manage their high cholesterol, or hypolipidemia, with realistic food-based interventions. ‘

High cholesterol is a major risk factor for heart disease, one of the biggest killers in the UK and US.

Heart and circulatory diseases cause 160,000 deaths each year in the UK – an average of 460 deaths a day.

The death toll in the US is even greater as 659,000 people die each year from heart disease.

In the latest study, patients replaced the foods they normally ate with options designed to lower their cholesterol.

After 30 days, the participants found their cholesterol counts to drop by an average of 9 percent.

Cholesterol charity Heart UK states that statins can lower LDL cholesterol by about 30 percent, and sometimes even 50 percent with higher doses.

The NHS says that if the drugs are taken as prescribed, statin users should see their cholesterol levels drop ‘within four weeks’ noticeable.

Participants in the study tried other, non-Phase One food brands of healthy options for another 30 days, but no similar cholesterol reduction was observed, the authors said.

One drawback of the study is that because participants did not have a prescribed diet outside of the options provided, changes in their eating habits may have affected their results.

Participants had an average LDL reading of 131 mg/dL which is considered borderline high.

A reading of 160–189 mg/dl is high and above 190 mg/dl places patients in the highest risk category.

The woman who claims that the plant employee raped her followed her home and received $ 4.5 million.

IND vs ENG: Before the fourth match, the Indian team suffered a big blow, Jasprit Bumrah is out of the team, know the reason