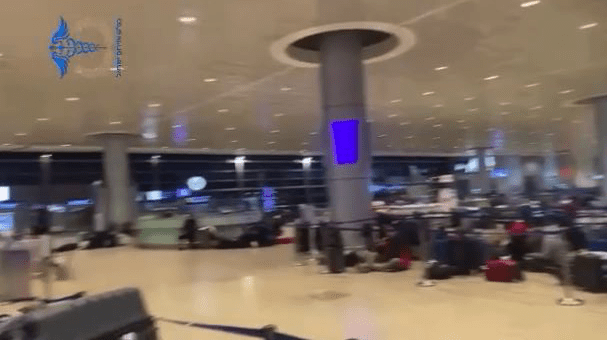 AJN Agency.- A car thief drove through a checkpoint at Ben Gurion airport on Sunday with a stolen vehicle after taking a wrong turn at one of Israel’s most secure facilities, causing a frenzy among passengers.

The breach triggered a security alert throughout the airport, which serves as the main gateway to Israel, and passengers in the airport’s departure Terminal 3 were told to lie down on the ground for fear of a terrorist attack. .

Once the driver was apprehended by airport security, a preliminary inquiry revealed that the vehicle was stolen and that the Palestinian driver and another passenger with him were trying to make off with it.

According to the police, the driver hit the checkpoint while driving against the traffic and was later caught by airport security personnel after a brief chase. After the car stopped, the driver exited the vehicle and attempted to flee on foot, before officers shot him in the leg, causing minor injuries.

The suspects were detained and taken in for questioning, with police saying both were Palestinians in Israel illegally from the West Bank.

The Israel Airports Authority stated that “security guards observed the vehicle speeding toward and through the Ben Gurion Airport checkpoint, and proceeded to intercept it by chasing, shooting, and barricading the vehicle until it came to a halt.” did”.

Harrel, a passenger who was present in Terminal 3 of the airport during the incident, told about the incident. “He asked everyone to get on the ground and follow the safety instructions. Everyone panicked, we lay on the ground for half an hour, and we heard rumors that a terrorist had entered the airport, there was chaos, but everything calmed down in the end.

Another witness named Eyal said: “They told us to get down on the ground and we didn’t know what was happening, we were in agony for several minutes.”

A taxi driver who works at the airport said, ‘I was standing next to my taxi, when suddenly the security guards started shouting and taking people towards the terminal. It was a glitch, I don’t remember anything like that.”

Pini Schiff, former director of security at Ben Gurion Airport, said that although standard procedure was followed in dealing with the incident, it may have caused unnecessary panic.

“I’ve always said that the last place a car thief would want to reach is Ben Gurion, because he has no chance to escape with his life or escape without being arrested,” he said.

“This is the third such incident this year, and in none of them the suspects targeted the airport. This is not a terrorist, but a car thief, who was being chased and lost control of what was in his way.

According to Schiff, “The emergency protocol at the airport is activated as soon as someone breaks into the facilities and there is no chance to reach the terminals, passengers are asked to get on the ground which is done as per protocol. I think they have exaggerated the incident by asking people to come down.

“It is important to underline that the suspect could not reach the terminal, and because he tried to escape by running over security guards, shots were fired at the vehicle. The drama was unnecessary because the suspect was not targeting the airport, and was not far from the terminals. was away.”