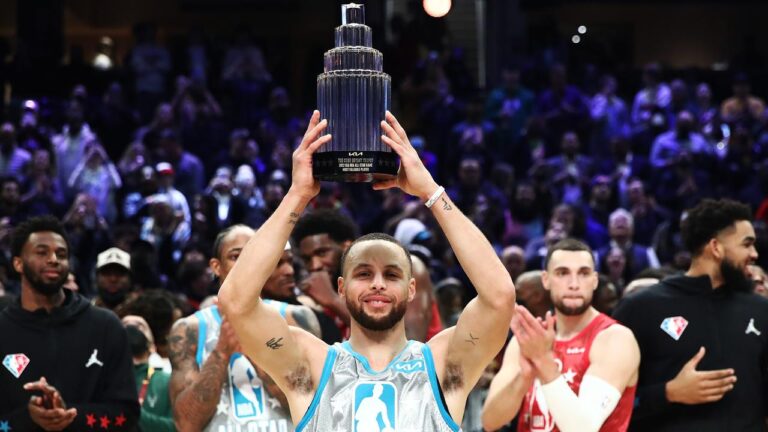 Steph Curry is the NBA’s greatest three-point shooter ever and he turned on a record-breaking performance in the All-Star game.

Steph Curry has been named MVP of the NBA’s All-Star game on Monday after a record-breaking shooting spree in Cleveland.

The Golden State Warriors star was on fire from beyond the arc, nailing a ridiculous 16 three-pointers from 21 attempts — the most threes ever scored in an All-Star game.

Watch the 21/22 NBA Season with ESPN on Kayo. Live coverage every week plus every game of the NBA Finals. New to Kayo? Start your free trial >

Curry couldn’t miss and all but two of his final haul of 50 points came from threes as he starred for Team LeBron, showing why he is the best three-point shooter in NBA history.

Albeit in an exhibition-style All-Star game where defense is virtually non-existent, Curry had the hot hand going and was sinking long bombs from all over the court.

LeBron James sealed a 163-160 win for Team LeBron over Team Durant with an epic fadeaway jump shot in the dying seconds.

Giannis Antetokounmpo had 30 points, and James finished with 24 on his old home court, while Philadelphia’s Joel Embiid led Team Durant with 36 points.

With his 50-point game, Curry fell just two points short of the all-time record for the most points scored by a player in an All-Star game.

He was awarded the inaugural Kobe Bryant All-Star MVP trophy in honor of the LA Lakers legend who died in 2020.

“The trophy is very special,” Curry said after being handed the trophy.

“It’s pretty special, obviously being back in Ohio.”

The only award now missing from Curry’s trophy cabinet is that of NBA Finals MVP.

The three-time NBA champion was pleased he was able to exact some revenge on the hostile Cleveland crowd, who booed Curry when Golden State and the Cavaliers clashed in four consecutive NBA Finals between 2015 and 2018.

“It takes some energy to boo, so you got to care a lot to do that,” Curry said after the game.

The NBA regular season will resume on Friday.