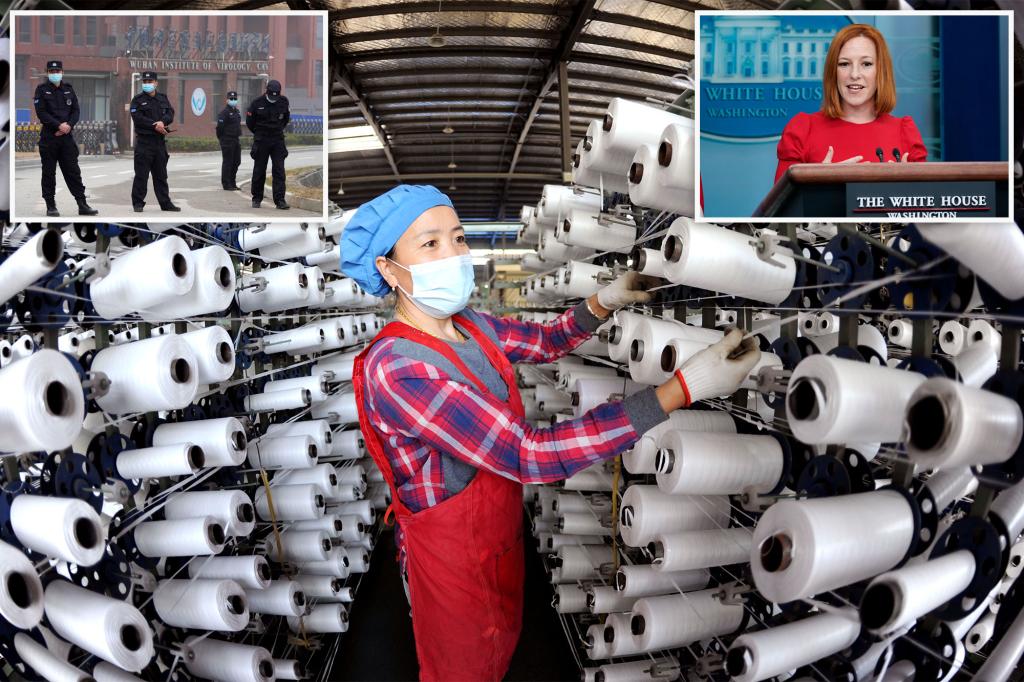 WASHINGTON — White House press secretary Jen Psaki said Monday that US officials are looking at repeating tariffs on Chinese goods “separately” from any US pressure on China to come clean about the origins of the COVID-19 pandemic and whether the virus leaked from a Wuhan lab.

Psaki, responding to a briefing question from The Post, said a review of Trump administration tariffs is focused on consumer prices, and not on the grim approaching milestone of 1 million US coronavirus deaths.

“Can you say where the tariffs question comes into pushing China to be transparent on the [pandemic] origins?” The Post asked. “And can you detail anything that President Biden has done with his levers of power — be it sanctions or tariffs or anything else — to press for transparency from China?”

Psaki replied, “The president has had recent engagements with [Chinese] President Xi [Jinping]as we have had at a very high level from a range of national security officials, and we always raise transparency in those conversations.”

The Post interjected, “Are tariffs — I mean, is that part of the pressure?”

“I would look at it separately from the COVID deaths or from Russia,” Psaki replied, referring to China declining to join a US campaign to sanction Russia for its invasion of Ukraine.

“There’s an ongoing review on Chinese tariffs. We’ve been looking at those through the prism of how they’re impacting industries here in the United States,” Psaki said. “We feel that a number of them have not been constructive and have hurt — had a negative impact on a number of industries. So we’re looking at and we’re continuing our review of that which is being led by our ambassador Katherine Tai.”

Read Also:  A U.S. drug agent has been sentenced to 12 years in prison for colluding with a Colombian cartel

The Post followed up, “Would tariffs be used to pressure China to be transparent, though? I mean, is that part of the consideration at all when considering rolling the back?”

“Well, again, we consider a range of factors as we look at the tariffs. The largest factor is the impact on the economy and a range of industries,” Psaki said.

The US intelligence community said in an August report to Biden that it’s possible the virus leaked from the Wuhan Institute of Virology, calling the theory one of two “plausible” explanations along with natural transmission from animals.

Biden rarely speaks publicly about wanting China to be transparent about the origins of the pandemic. Former President Donald Trump, by contrast, has demanded that China pay $10 trillion in reparations.

Biden held a 3 1/2 hour virtual summit with Xi in November and the president’s subordinates gave reporters the impression the matter of the pandemic’s origins wasn’t raised.

At his second solo White House press conference in January, The Post asked Biden why he didn’t push Xi for transparency during the November summit and whether it was linked to his son’s business interests in China.

“Is there a reason your press staff was unaware of that? And what did you say to the Chinese president?” The Post pressed.

“They weren’t with me the entire time,” Biden said. “I made it clear [to Xi] that I thought that China had an obligation to be more forthcoming on exactly what the source of the virus was and where it came from.”

A written statement attributed to Biden in August said “our efforts to understand the origins of this pandemic will not rest. We will do everything we can to trace the roots of this outbreak that has caused so much pain and death around the world so that we can take every necessary precaution to prevent it from happening again.”

Documents published in September by The Intercept revealed that US health officials indirectly funded “gain of function” research at the Wuhan lab that sought to better understand viruses by manipulating them — including modifying three bat coronaviruses distinct from COVID-19 and discovering they became much more Infectious among “humanized” mice when human-type receptors were added to them.

Tai, the US Trade Representative, and Treasury Secretary Janet Yellen recently indicated the US would review the Chinese tariffs that Trump used in an attempt to force a major trade deal with China.

The Peterson Institute for International Economics said in March that eliminating Trump’s tariffs on China could reduce US inflation by 1.3 percent, though Tai said she wasn’t convinced. The annual US rate of inflation hit 8.5 percent in March.

North Korea’s Kim attended the parade in honor of Dada

Thinking of buying a dehumidifier after the rain and floods? Here’s what you need to know