Christmas of culture and creativity 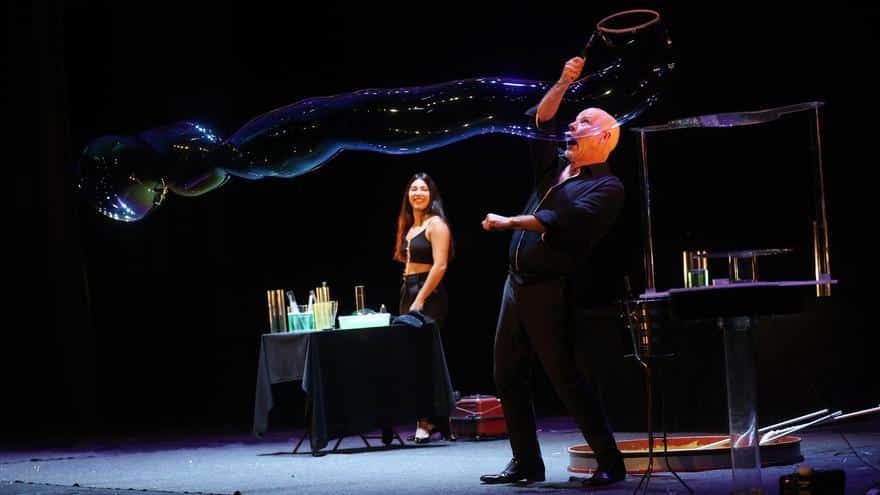 Because in this time of faster pace and less reflection, culture becomes more essential than ever, it is time to join boys and girls in the education of a sensitive and creative gaze through the arts. On these dates of free time with the family, there is a choice: performing arts shows, storytelling, workshops… With the content and the idea the entertainment is more than guaranteed.

On 28 December the Gyre stage circus technique ‘Blow!’ Will host the show with photo courtesy

Extensive programming in Spanish and Basque

Gayre Theater has prepared a family programming Which begins this Monday, December 26, with the show Cancion de Navidad, a project by El Bardo Teatro designed for boys and girls from the age of 5 to present one of the most representative titles of the famous British author Charles Dickens. Saves One: The Short Novel A Christmas Carol, retitled as A Christmas Song in its stage adaptation. In addition, the Pamplona Theater proposes a musical date with Rock in Los Munsters (December 27), Circus in ¡Bopla!, a Truka Circus production in co-production with Cía Infallibles and Lanordica (December 28), Music Through humor and poetry, of the language of the clowns in the Poura Sirco motion by the Lucas Escobedo Company (December 29), and, already in January, three events in Basque: the puppet show and the Unico Theater (day 2) by the Teatro Paraiso that how you life can change with the birth of a sister; the play Zuhitzk Landtzen Zeiten Gijona by Teatro Goracada (January 3), 2022 FETEN Award for Best Playwriting; and the multimedia theatre, video-animation, interaction and music show Tartalo, Gajtren Secretua (4th).

Baluarte offer starts on 27 with a children’s concert in Basque sing color wake upwhich will be followed by another children’s concert on the 28th in two sessions, at 4:30 pm and 7:00 pm, in this case singing game, under the title Long live my planet. The afternoon of December 29 will be dedicated to Family Rock with an appointment sons of rock and roll, With which Minimusic returns this Christmas and proposes a show that, for the first time, pays tribute to the best national rock of all time: Extremoduro, Platero y Tu, Barricade, Maria, Loquillo, Miguel Rios, M-Cabilla, Fito and Fittipaldis, among other artists. In January, on the 2nd and 3rd, each day in two sessions – at 12:30 pm and 5:30 pm – it will be possible to enjoy a children’s music show in Basque by Ene Kantak, a highly anticipated event that The occasion is celebrated under the title Amojio Festa; After 10 years on stage, Ene Kantak embarks on a new adventure full of music, dance and laughter, in which the audience will be immersed in emotions and how to manage them.

Theater with Chocolate and Creative Workshop

This time the traditional appointment with the theater and hot drinks during the breaks offered by ENT will give the opportunity to enjoy the staging of the winning text, in Spanish, of the XXXI Competition of theatrical texts aimed at children, which this 2022 Lemon Tree Diary, by Valencian writer Paco Romeu. Aimed at boys and girls from the age of 5, it tells the story of two twins, Cristina and Bruno, who learn everything under the leaves of an old lemon tree and under the watchful and affectionate gaze of their mother. A beautiful story about life and its processes. The play will be staged on 26, 27, 28, 29 and 30 January, as well as on 2, 3, 4, 7 and 8 January, at 6:00 pm in all cases and with admission for 7.5 euros.

In addition, the Escuela Navarra de Teatro again offers conferences this Christmas. I’ll tell you… Play more!, a workshop aimed at girls and boys ages 4 to 12, with activities designed to approach theater in a playful, creative and participatory way. It is offered in both Spanish and Basque from 10:00 am to 1:00 pm on December 27, 28, 29 and 30; The sessions will be different each day, so you can attend one or as many days as you like.

Evaluation of the Art of Illustration

This Christmas, the Children’s Workshops of the Navarra MuseumAimed at boys and girls aged 5 to 12, it is organized within the framework of the temporary exhibition If Choosing Now, We Do It in Pieces, which showcases the work of ten local painters and their Personal vision of what is now and here, present or everyday. They will take place from December 27 to December 30 and will be dedicated to illustration, with each day focusing on the work of two different artists. La Chincheta Bruna, led by Sonia Iljarbe and Eneco Pérez, will deliver the workshops in a bilingual Spanish-Basque format.

The children’s camp proposed by the Oteiza Museum for this Christmas takes the Oeiza exhibition as its reference. Oteiza. Huarte; In this activity you will learn how The Importance of Creating a Collection and Displaying It at the Right Place For your enjoyment and protection. From the languages ​​of sculpture and architecture, participants will create their own museum through the construction of a model and the design of several sculptures to be showcased as an exhibit. The camp will be held from 9:30 am to 1:30 pm from December 26 to December 30 for boys and girls in the age group of 6 to 12 years. This is a bilingual Spanish/Basque activity and costs 50 euros for the whole week (pre-registration at 948332074 or recepcion@museooteiza.org).

The University of Navarra Museum (MUN) hosts the Urban Children’s Camps Christmas Making!Between 26 and 30 December. From 9:00 am to 2:00 pm, this creative activity proposes games, dance, music, laughter and learning about the elements of Christmas and its values. Furthermore, it aims to develop linguistic competence in English and be a source of entertainment while working on the creativity and ability of the participants to express themselves. Similarly, on January 8 at 12:00 PM, MUN will host the first theatrical tour of the year, aimed at family audiences. It is free with admission to the museum but requires prior registration at https://museo.unav.edu/visita/grupos-y-guias.

Emotions and much more…

From December 23 to January 4, the Civivox network offers storytelling, music and artistic workshops in the mornings, and dance and theater performances in the afternoons (programming at pamplonaescultura.es). And Navarre’s various public libraries also offer special workshops for children on these Christmas dates.