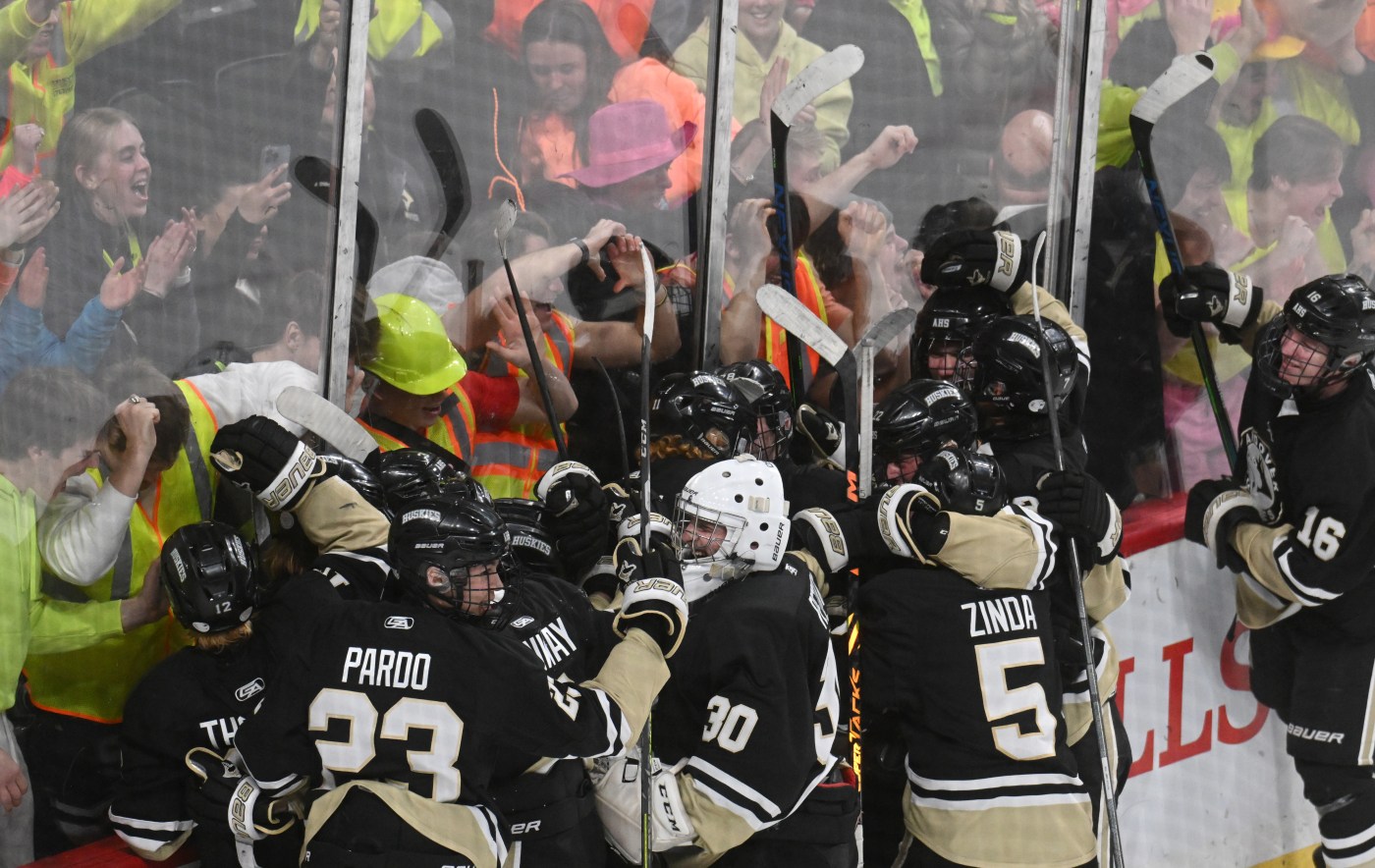 The third time was truly the charm for Gavyn Thoreson and the Andover boys hockey team Thursday night.

In a couple different ways.

Making their third straight state tournament appearance, the Huskies finally managed to escape the quarterfinals, dramatically downing Moorhead 2-1 in Class 2A action at Xcel Energy Center on a goal by Thoreson with 5:42 left in the second overtime.

“I made eye contact (with teammate Cayden Casey) as we were going down the ice,” said Thoreson describing the game-winning goal. “He knew what he was doing and made a perfect pass. We do a drill in practice called stiff stick where we go hard to the net and just tip it in.

“I don’t even remember what happened,” he added with a smile. “I blacked out.”

The game winner came after an apparent goal by Casey with 16.3 seconds to play in regulation was disallowed on review when officials ruled he had made a kicking motion.

There was a second review after the puck got behind Spuds goalie Kai Weigel in the first overtime. Officials ruled the whistle had blown before the puck went in the net, and the call on the ice stood.

But there was no doubt about the goal by Thoreson. And, as a result, Andover (23-5-1) advances to meet top-seeded Hill-Murray in the semifinals at 8 pm Friday. The Pioneers held off Lakeville South 3-2 in the other quarterfinal Thursday night.

“The coaches just told us to take a deep breath,” said Casey of coming back after seeing an apparent game-winning goal wiped out. “There’s nothing you can do about it after that. We just had to play our game and keep working hard.”

“It feels really good,” Andover coach Mark Manney said. “These guys probably feel better about it than I do. They had to do all the work. I just stood and watched.

“We’ve now come here as a five seed twice and as the one seed once. And you can play a lot looser being the underdog — even if it’s as a minute underdog in the four-five game.”

Read Also:  Vikings QB Kellen Mondt is happy to come out with the old, in with the new

The Spuds, who defeated Andover 6-1 when the two teams met on Dec. 3 in Moorhead, outshot the Huskies 45-33 Thursday. But Andover senior Austin Brauns, a finalist for this season’s Frank Brimsek Award given to the state’s top senior goalie, finished with 44 saves.

Weigel, a sophomore, finished with 31 saves for his team, which had lost only once since mid-December prior to Thursday.

“I felt like they had more jump than us for two periods,” Manney said. “And then it started to even out the first half of the third.”

Things remained scoreless well into the second period before Huskies junior Cooper Conway scored with 11:13 to go before intermission. Moorhead tied things up when junior forward Harper Bentz scored his 38th goal of the season with 6:21 left in the period.

And that’s how it remained until Thoreson finally brought things to a close.

“Obviously, it means a lot to us,” Brauns said. “The past two years we’ve lost close ones in the quarterfinals. (So ​​to come out on top tonight) means a lot.”