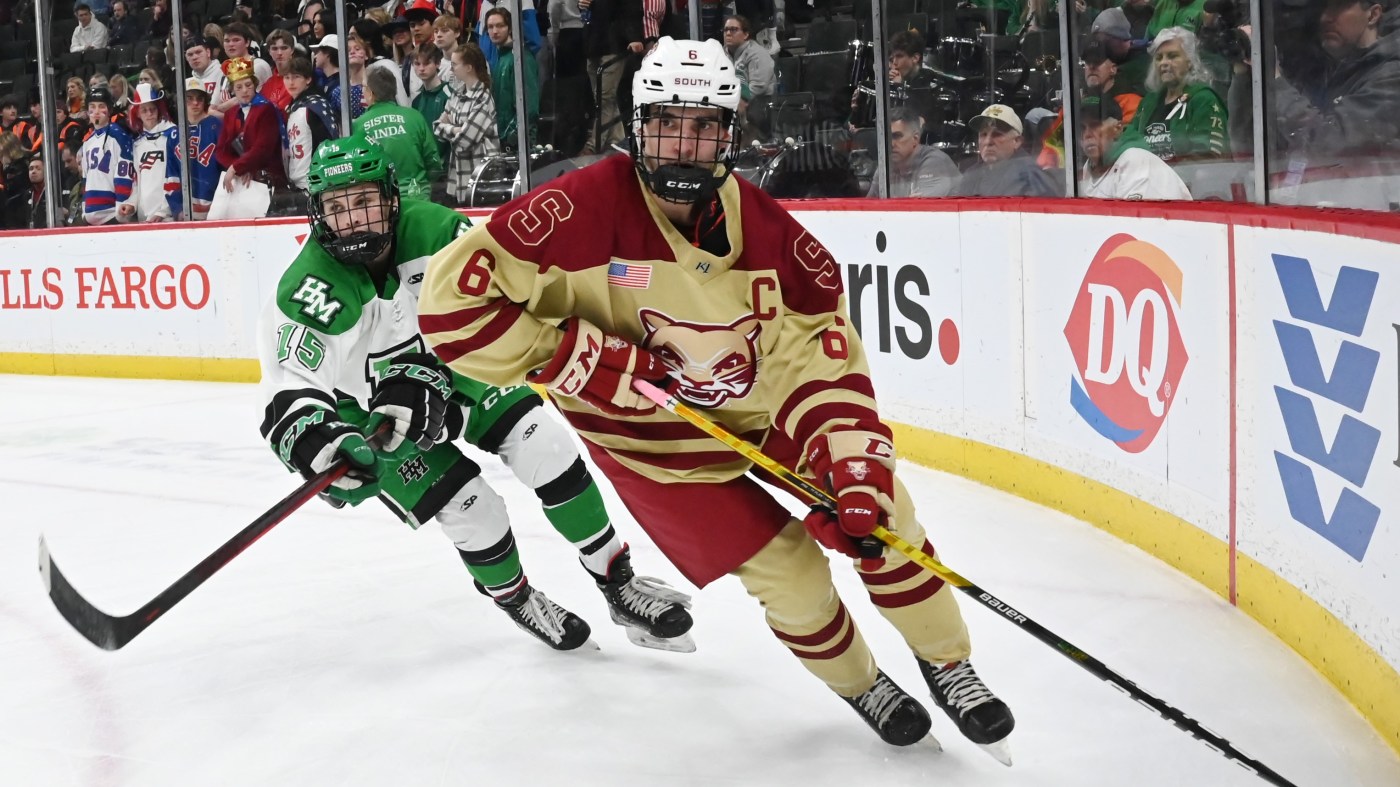 It was early evening, but Jack Erickson got a quick wake-up call as the Hill-Murray junior goalie made his first state tournament start Thursday night.

It came when junior forward Tanner Ludtke scored 10 seconds into the first period to give unseeded Lakeville South an early one-goal lead over the top-seeded Pioneers in a Class 2A state quarterfinal matchup at Xcel Energy Center.

After that, though, Erickson could not have been more on his toes, finishing with 32 saves including a couple of huge stops down the stretch in the third period, as Hill-Murray held off the Cougars 3-2.

“I’d say that kind of woke me up,” said Erickson of surrendering the early goal. “It got me into the game a little bit.

“It got the nerves out.”

Hill-Murray (24-4-1) advances to meet the winner of the Andover/Moorhead quarterfinals in the semifinals at 8 pm Friday, continuing a quest for the state title it never got the chance to defend a year ago. The Pioneers won the Class 2A championship in 2020 but were unable to take the ice in the quarterfinals last season because of a COVID-19 exposure, meaning they returned even hungrier this time around.

“It’s super special to us to be here,” said senior Dylan Godbout, the East Metro boys hockey player of the year and (along with senior teammate Leo Gruba) a finalist for this season’s Mr. Hockey Award. “There are a lot of guys in that locker room who didn’t get the chance to do this last year.”

They’re getting the opportunity this time around. But when Ludtke scored before fans had even settled into their seats for the start of action, it was a bit of a jolt. The Nebraska-Omaha recruit now has 23 goals this season, and that one missed being the quickest goal in a state tournament game by only three seconds, falling short of a goal seven seconds in by St. Cloud Cathedral’s Josh Wolke in the 1993 Tier II third-place game.

“I’ve been to the tourney twice before,” said Ludtke, whose team finished as runner-up to Eden Prairie last season. “This is my third time now. I know you can’t pass up shots there. I got a spot and saw upper left. It was a good way to start.”

But senior Axel Begley answered with a goal just under three minutes later, then Gruba followed with one of his own on the power play with 11:11 remaining in the first period as Hill-Murray took a 2-1 lead into the first intermission.

“You always want to start a state tournament fast, and it was a bummer to give one up just 10 seconds in, but we responded fairly quickly,” said Godbout, who had an assist on Gruba’s goal. “We got the momentum back and I don’t think we ever lost it after that.”

“We just made a couple of mistakes, but (they) will capitalize on every mistake you make because that’s the kind of team they are,” said Lakeville South head coach Josh Storm, who is in his first season leading his team.

But Storm’s players did not go quietly. Junior Tyler Lafferty scored just as a Pioneers’ penalty expired to cut the gap to 3-2 with 13:41 remaining. That, though, was as close as the Cougars could get as Erickson came up with some huge saves late, including one from his direct left by junior Aidan Willis with 7:58 to go.

“I was on the ice and I had a perfect view of that one,” Godbout said. “My jaw hit the ice. I knew he could make that save. But to do it on this stage, in front of this many people, is something that he’ll remember and I’ll remember for the rest of our lives.”

So now it’s onto the semifinals with the goal of more beyond that.

“This is a great feeling,” Erickson said. “It’s been a dream of mine my whole life to get here. I saw what it was like when we won two years ago and I want to help us do that again.”