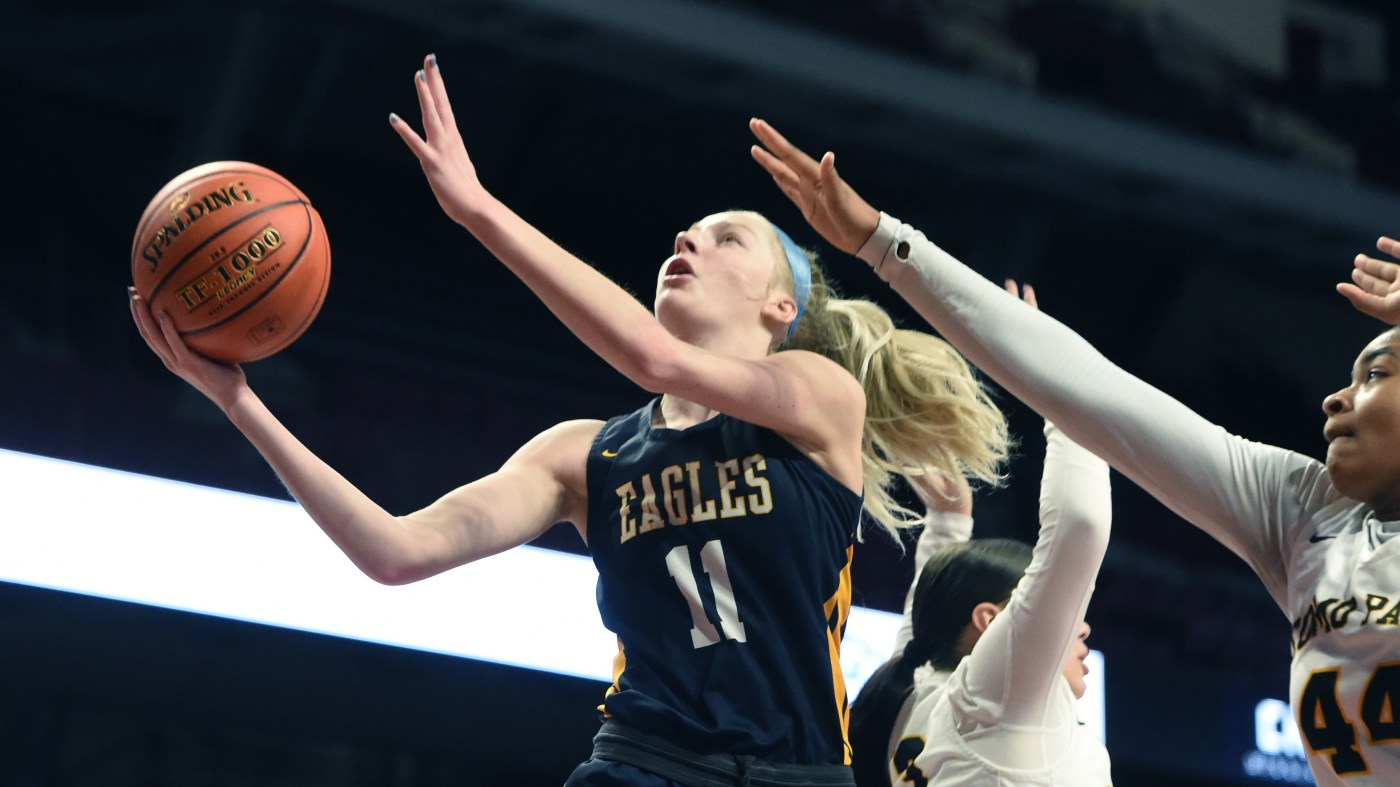 Como Park stared at a double-digit deficit in the second half of Thursday’s Class 3A state semifinals, but there was no panic in the Cougars. They’d been in such spots before, as recently as last month, when they rallied from down big in the second half to knock off Minnehaha Academy in overtime.

“So it wasn’t new,” Como Park senior guard Kaylynn Asberry said. “I was just trying to tell everyone, ‘We’re still in this game. Keep working, keep playing.’ But you couldn’t get into a rhythm.”

Such was the story for the Cougars in Thursday’s 86-72 loss to third-seeded Totino-Grace at Williams Arena. Como Park loves to get up and down the floor to set the tone in its contests. That never really happened in a whistle-filled contest featuring 54 free-throws, 36 of which were taken by the Eagles.

England noted she wasn’t taking anything away from Totino-Grace (22-8). The Eagles were great, shooting 53 percent from the field and 50 percent from deep. Hannah Herzig had 29 points, 12 rebounds and 11 assists for a rare state tournament triple double.

Abby Lord added 20 points, while Leah Dengerud scored 17. Totino-Grace was able to handle what pressure Como Park did apply and often turn it into good looks for itself. Eagles coach Mary Dengerud said Totino-Grace was well aware of how good Como Park was but felt the Eagles’ schedule prepared them for the moment.

“We play teams like Osseo and Park Center, same kind of style, and we play them four times a year,” Herzig said, “so we’re kind of used to that get it and go (style), very aggressive basketball. “

Totino-Grace will meet top-seeded Becker for the state title at 6 pm Saturday at Williams Arena. Leah Dengerud said the Eagles’ theme all season has been “a path to a purpose.”

“We believe that going to the state championship is our purpose,” she said, “and as a team, we collectively did that.”

England noted the degree to which Como Park’s defense has been improved throughout the year. It’s what got the Cougars to this point. So to give up that many free throws was a surprise.

“We’re just a physical team, and that’s how we know how to play is physical,” Como Park senior guard Shakyla Walker said. “The refs took that as us being too aggressive.”

Totino-Grace utilized an 11-0 run over the final three minutes of the first half to take a 14-point lead over the No. 2 seed heading into the break and never really looked back. Como Park (23-7) made a couple mini-surges to trim the deficit back to single digits but couldn’t shrink it further from there.

Cougars star guard Ronnie Porter finished with 22 points and four steals, while Asberry scored 14 and Walker added 11. The Cougars still have a third-place game to play. They’ll meet Mankato East at Concordia-St. Paul at 3 pm Saturday. But the moments after Thursday’s loss provided moments for reflection. This was Como Park’s second trip to state ever, and first trip to the semifinals.

The group of seniors took the program to heights not previously reached.

“We’ve been together since we started basketball, and just getting here with each other and getting to experience state before we go off to college is really great,” Walker said. “I’m sad we didn’t get where we wanted to … but I’m very proud of everybody on my team.”

That Como Park didn’t win state, England said, does nothing to define this group. She’s been around the girls for years, and knows they’re “going to be great” — because that’s all they’ve ever been.

“We played great, no matter the outcome. We’re going to finish strong,” Porter added. “We still put our city on. We got far, far enough. We got to state, that’s all that matters. That’s what we wanted. We wanted to win, but we got here, so I’m proud of everybody, the coaches, everybody that came along with us. It’s been a great experience.”

With the game tied 62-62 with less than a minute to play, Alexis Rose hit one of her six triples to put the Bulldogs up for good.

Becker led 59-44 with 6 minutes, 30 seconds to play in the semifinal, only to have Mankato East go on a 16-1 run, capped by a bucket from Lexi Karge — who finished with a game-high 22 points and 10 rebounds — to knot the score with 93 seconds to play.