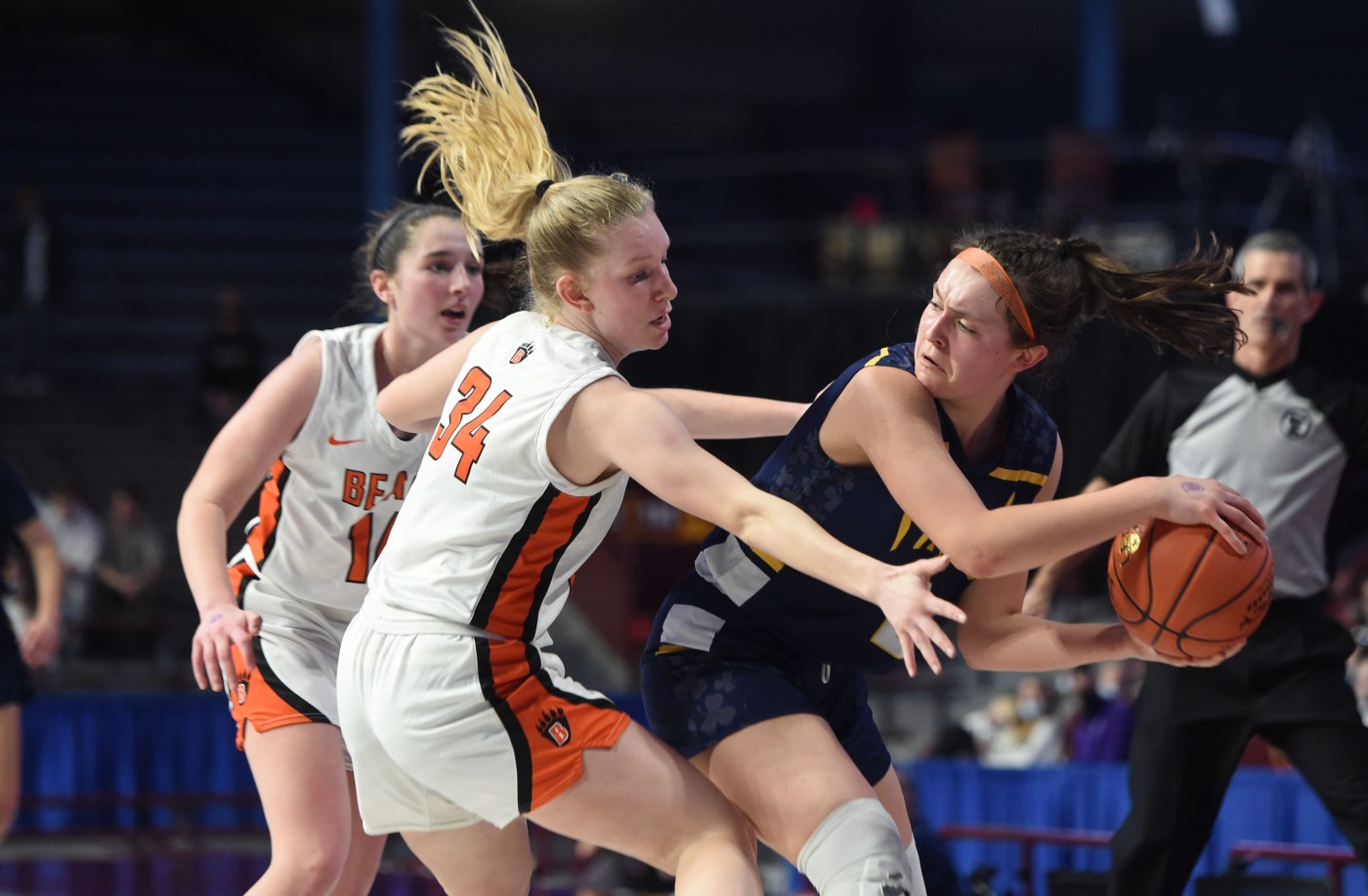 With points so hard to come by for White Bear Lake and No. 10 Rosemount on Wednesday, it took a defensive play to tip the scales in their Class 4A quarterfinal at the girls basketball state tournament at Williams Arena.

“Sometimes you can just tell where the ball’s going,” said Eckerle, a senior guard. She is locked in on a pass attempt before knocking it away above the 3-point line and taking it the distance for a layup and a 34-31 lead with 3:16 remaining.

“I took a chance on that one and it worked out,” she said.

Addison Bachmeier’s free throw on the front end of a one-and-one with 5 seconds left proved to be the difference, giving the Bears a 35-31 lead before Rosemount’s Nicole O’Neil made a 3-pointer at the buzzer.

Rosemount, which lost to Chaska by a basket in last year’s title game, heads to the consolation bracket to play the Panthers at Concordia-St. Paul at 10 am Thursday.

The Irish (24-6) tied the score at 31-31 on the second of consecutive layups by Tayah Leenderts, who finished with game-highs of 18 points and nine rebounds. But after Jordyn Schmittdiel made 1 of 2 free throws to give White Bear Lake a 32-31 lead, the Irish never caught up again.

With the score 34-31 and 36 seconds left, Rosemount coach Chris Orr called a timeout. The Irish took about 26 seconds off the clock without a shot attempt before Orr called time out again with 10 seconds left. After a missed layup with 7 seconds left, Bachmeier got the rebound, was fouled and went to the line for a 1-and-1.

Bachmeier had the same chance with 43 seconds left and missed the front end. The second time was the charm.

“I’m glad I made the first one,” she said. “It took a little pressure off. I trust myself and have confidence.”

Baskets of any sort were hard to come by. The Bears shot just 29 percent from the field, Rosemount 35 percent. Eckerle, who entered the game averaging 16 points for White Bear Lake, finished with four points and two steals.

“They were just up in my face the whole time and they grabbed a little bit, but that was OK,” Eckerle said. “Just moving and screening and helping (the team) was the goal.”

Rosemount’s Alexa Ratzlaff was charged with shutting down Eckerle.

“The last five years she’s guarded the other team’s best player — night in, night out — and she’s shut them down every night,” Orr said.

She essentially did it again on Wednesday, but it wasn’t quite enough for Rosemount.