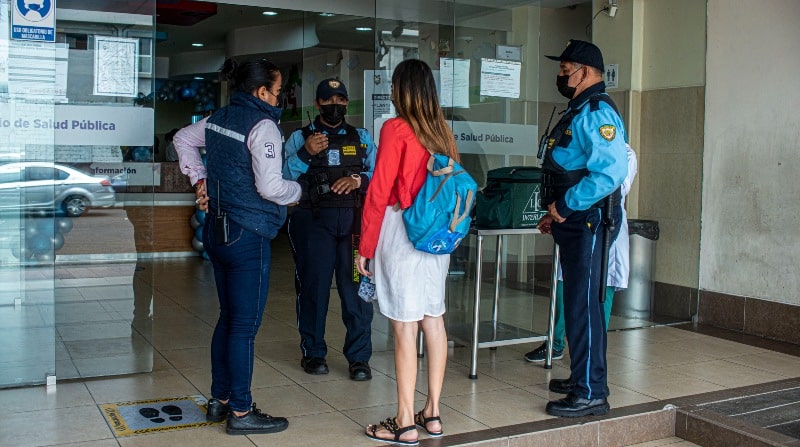 The protocols of the Silver Code include the coordination of joint actions between the security personnel of the health units and the National Police. Photo: Enrique Pesentes / EL Comercio

Ambulances Protected by patrol. is one of the six security procedures of silver code, This is the strategy proposed by the government to give Security to Ecuador’s health units Reported armed attacks followed in 2022, including the kidnapping of health workers at a hospital in Manabi.

The initial phase of the scheme brings together 18 hospitals and health centers, Priority is given to those located in places of greatest danger or reference sites for the care of persons deprived of liberty.

Marco Garnica is that ECU 911 Deputy Deputy General Director of Integrated Security Systems, He explains that coordination with the National Police is activated when an alert is received. The intervention process according to the level of risk is defined as silver code in health units.

“The deterrent axis is activated before an act of violence and is coordinated with community police units to observe and act in the field”, points out Garnica. He adds that “if things become complicated, tactical teams are activated, as during 2022 to avoid seizure of facilities in seven cases of armed trespass”.

There are specified protocols for planning Care for patients referred to certain health facilities and who have been involved in violent acts, Also intervention strategies in case of seizure of health establishments and security actions for brigades traveling from at-risk areas, for the custody of the vehicles in which they are transferred.

Ministry of Health Registration 77 facts about insecurity in 2022. These include robberies, care for the seriously injured during riots in Ecuadorian prisons, intrusions by armed men, dangerous patients… but the figure could be much higher.

loss cries of despair from a nurse At the door of the Chon hospital, in Manabi, they were recorded and demonstrated the unlimited violence of criminal gangs. Terrified, the woman called for help as she was dragged into the building by three men carrying rifles; They were members of another criminal group attempting to kill a patient.

Police managed to gain control of the medical unit, which at the time was hosting 120 people, including family members, patients and health workers. These are some of the objectives of the Silver Code: ensuring the lives of users of the health system, maintaining the continuity of health operations, and protecting the health infrastructure.

but still Pending subsequent treatments for those who were exposed to traumatic events Like in Chon Hospital. is one of the requests of Wilson Tenorio, President of the Ecuadorian Medical Federation,

this is a The problem that is being dragged since the Kovid-19 pandemic, Now it is also compounded by the lack of supplies and medicines in the health units. This prevents professionals from carrying out their activities on a regular basis.

Wilson Tenorio it turns out that Establish an agile referral and counter-referral system, This should include Ministry of Health psychologists who are available to care for personnel exposed to violent situations in the middle of their work day.

Tenorio also requests that resources be guaranteed so that Codigo Plata can keep up with the times. “The plan also includes equipment, such as metal detectors; There should be a budget that guarantees its sustainability.”

Waiting for silver code in health units in rural areas

The terror of drug-criminal groups extends beyond the big cities, “The doctors here no longer want to come out of fear. A wounded man arrives, it turns out he belongs to a gang and they threaten the staff to rescue him”, says a district director in the rural part of Guayas,

In other basic hospitals of the province Doctors have sought police protection When a conflict between gangs is identified overseas when caring for a person involved in a violent act. Some already had operations to transfer patients under ‘code red’. This determines the degree of its danger, camouflaging its exit through rarely used doors.

Deputy Deputy Director General of ECU 911 recalled that for the pilot scheme Silver Code for health units started in Guayaquil, And although in the first phase they covered 18 centers – located in provinces such as Guayas, Santo Domingo and Manabi – they will implement security procedures in any area where it is needed. “Preliminary analysis was done according to variables, such as the areas where insecurity is most commonly reported.”

ECU 911 It will use its own video surveillance system, which has cameras installed in some health units. In addition, it will receive information from hospitals with closed-circuit video to monitor and identify possible incidents.