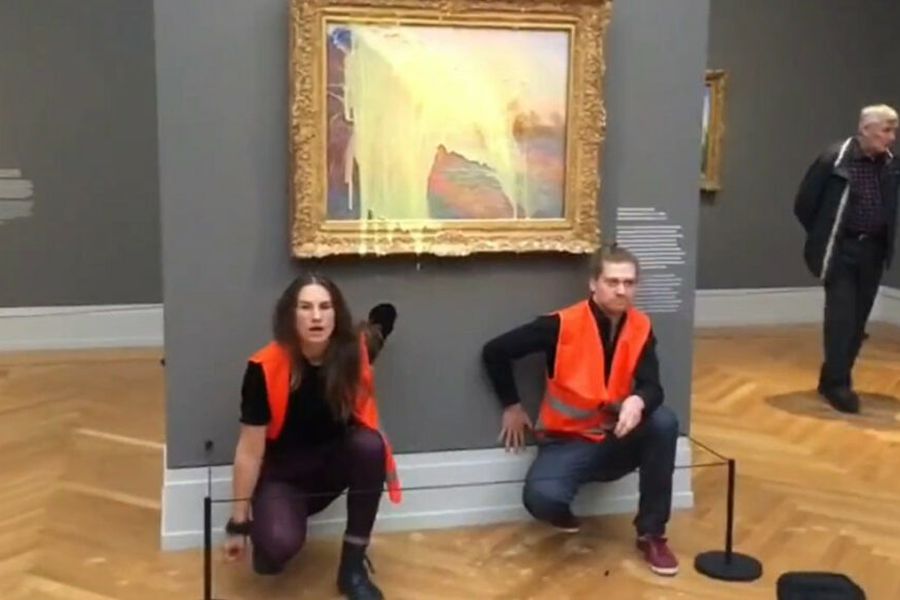 In recent weeks, several museums in Europe have been visited by activists who have threatened the integrity of a range of works of art under the pretext of saving the planet. What began at the National Gallery in London against a painting by Van Gogh has multiplied across Europe in particular. The Hague, Madrid, Milan, Paris or Potsdam have also seen similar outrage against works by Goya, Vermeer, Monet, Warhol and others.

How could it be otherwise, this expression of political activism did not take long to react. There are those who support or understand such an act, saying among other things—that these activists seek to question the underlying hierarchies of value in our societies—“What is more important, a painting Or the planet?” “otherwise they are not taken seriously by the great powers”. Therefore, those who throw soup at Van Gogh or mashed potatoes at Monet will have the “merit” to attract the attention of public opinion.

Others dismiss such protests as harmful to the environmental cause, and in this regard they do not seem to be wrong. According to an opinion poll conducted by Center for Science, Sustainability and the Media From the University of Pennsylvania, more people decrease their support for initiatives that address climate change because of these actions than those who view their commitment to these types of companies.

Is it really the only criterion for assessing these facts is their ability to appear in the media? What if these acts benefit environmental causes, would they be okay for this? It is incredible to see that the validity of the Act itself is never questioned in such analyses. beyond the objectives that an activist may have, regardless of whether or not their actions benefit a cause Prima facie Great, is it fair to attack artistic heritage? The answer is a resounding no.

Along with affirming that in a civilized society the legitimate influence of property – whether state or private – is reduced to cases of pilferage of necessity, it is necessary to point out that it is particularly paradoxical to destroy art. Nature should be destroyed, because these are the two manifestations of beauty that we need to have a full life and that is the main reason why we, along with museums, curators and experts, are working on our progress based on a more friendly treatment of nature. Willing to invest significant amounts of money to consider and direct.

Furthermore, we should not lose sight of the fact that such vandalism seriously undermines trust, being an essential value when visiting a museum. The paintings must be conveyed with a certain vulnerability in order to be fully appreciated. Contemplating art also requires a calmness that is difficult to achieve in an environment suspicious and alert to any danger.

The worst thing museum managers can do is to succumb to this vandalism for fear of what they will say—thinking that if they refrain from such an act, they will be seen as collaborators with the agents polluting the planet. Will work in It is worth betting on beauty and means preventing and suppressing such acts with all the means provided by law. Roger Scruton laments the turn in the 20th century in which art prioritized crime and originality to the detriment of beauty. If we are able to drive the eco-vandalists out of museums, we are taking a small step towards fulfilling one of the posthumous English philosopher’s wishes.