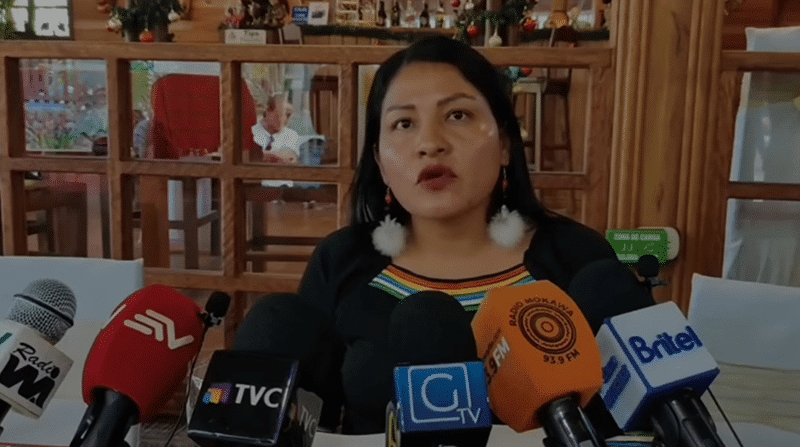 The Konai leader demands that negotiated agreements on health issues be fulfilled, along with the rest of the tables with the government. photo capture

zenida yasakamaVice President of Conai demanded from the government on December 28, 2022 lack of health care To the indigenous peoples of Pasta. It proposes that the province be declared a state of emergency.

“many times Children have died due to lack of treatment Because there are no health posts. in some communities they exist, but there is no equipment, There is neither medicine nor doctor. We have overcome Covid, people and nationalities have been able to resist by their own means (…), but we need hospital care, Yasakama told Pastaza at a press conference.

These conditions cause the leader to believe that the government should declare a state of emergency On health in pasta. “Not only is the indigenous territory in the claims, pasta has equal status in all regions, but the most affected are the peoples and nationalities,” he stressed.

In this context, he mentioned that in a dialogue table with government was settled on Nadi Ambulance and ground transportation. He said, for example, claims arise when a ground ambulance is called but does not turn up. Communities settled on the border and do not have access to health care, education and infrastructure, Yasakama criticized.

in the act of concluding agreements access to health table, There is an agreement to improve the management model of the Ministry of Public Health, which implies an analysis of the institutional presence in the region by the end of this month. The document states that the implementation will happen by June 2023.

In another agreement, it was proposed to classify health establishments to intervene according to type and area. The Vice President requested that Puyo Hospital With equipment, medicines, experts and translations.

The health portal on the website of the Ministry of Government has reports of vehicles from public health establishments across the country.

With regard to Regional Coordination 3, which includes the provinces of Cotopaxi, Tungurahua, Chimborazo and Pastaza, the report indicates that it has 226 vehicles. Of these, 89 are operational, 32 are inactive, 18 are damaged and 18 are to be withdrawn; Idle vehicles correspond to 14.15% of the total vehicle fleet.

Most of the vehicles have completed their useful life and due to movement on the third-order roads, there is frequent damage to the vehicles, which limits the normal activities of coordination, according to the report.

Another difficulty of coordination is that, due to the year of manufacture of the vehicles, they tend to lose sequence in their parts and components. They have to be imported and this leads to delay in repairing the vehicles.

For example, the Hospital de Puyo alone has five operational vehicles, two inactive, one damaged and one for accident.