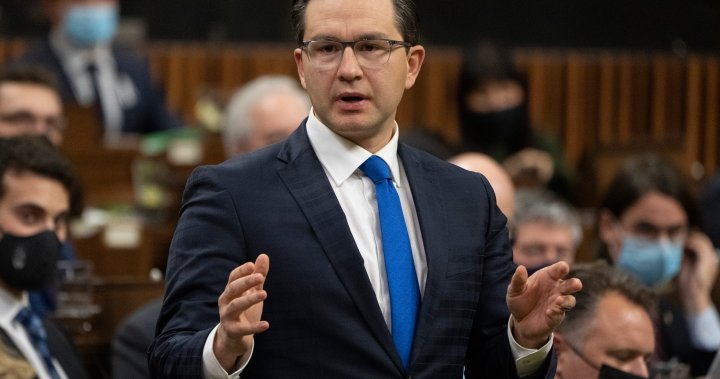 Pierre Poilievre has launched his bid to become the next leader of the Conservative Party of Canada, with other members of Parliament already pledging their support.

He is the first candidate to announce his intention to run for the party’s top spot after MPs forced Erin O’Toole out of the position only three days earlier.

In a three-minute video released on social media on Saturday night, Poilievre criticizes government spending and says he wants to make “Canadians the freest people on earth.”

I’m running for Prime Minister to give you back control of your life.

Seated at a desk in front of a bookshelf with soft music playing over his words, Poilievre doesn’t mention the Conservative party by name or the contest in his announcement, saying only that he wants the job as prime minister.

Poilievre is throwing his hat into the ring before the race has officially begun and the party’s election committee doesn’t yet exist and no rules have been released.

As such, he can’t begin fundraising.

A document attached to his launch video released Saturday lists one of the options for supporters to choose to help is by purchasing memberships to vote for Poilievre.

Poilievre’s announcement was quickly followed by many MPs throwing their support behind his candidacy.

“I’m with Pierre,” tweeted Ontario MP Melissa Lantsman. “No question — Pierre is the right answer to a strong (and) united Conservative Party.”

Many Conservatives regard the 42-year-old Ottawa-area MP a natural front-runner in the race.

He currently serves as the party’s finance critic and was first elected to the House of Commons back in 2004 at the age of 24, serving in former prime minister Stephen Harper’s Conservative government.

Throughout his time in Parliament, Poilievre has built up a reputation as a fiery performer in the House who is deeply steeped in conservative values ​​and thinking.

He enters the race with a considerable social media following. During last year’s election, he struck out with his own campaign videos and slogan, separate from that of the party’s or leader’s.