Controversial internet personality Andrew Tate and his brother have been arrested in Romania, according to his lawyer 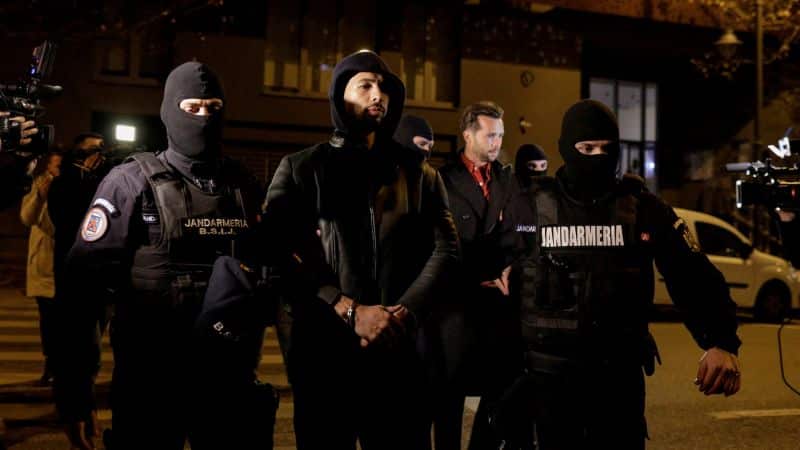 (CNN) — Controversial internet personality and former kickboxer Andrew Tate and his brother Tristan Tate were arrested in Romania on Thursday, according to their defense attorney. Romanian authorities have announced an investigation into human trafficking and rape, but have not released the names of the suspects.

An attorney for the brothers told CNN that they have not been arrested, but have been detained by Romanian authorities for 24 hours.

“He (Andrew Tate) was not arrested. He was detained for 24 hours,” said their lawyer, Eugen Vidinac, adding the brothers are expected to appear in court later Friday.

The lawyer did not discuss any of the allegations.

Police issued search warrants at five homes and detained four suspects, including two British and two Romanians, according to a statement issued on Thursday by Romania’s Organized Crime and Terrorism Investigation Directorate (DIICOT). DIICOT did not name any of the four suspects, but released edited, grainy and sometimes blurred video to show the raid.

A man can be seen being frisked by the police. It is not clear who is being detained in the video.

In a separate video posted by CNN affiliate Antena 3, officers from Romania’s Organized Crime and Terrorism Investigation Directorate can be seen escorting Andrew Tate and his brother Tristan Tate to police vehicles.

On Friday, Andrew Tate tweeted from his verified account: “Matrix sent their agents.”

DIICOT alleged that the four suspects formed an organized criminal group that extended from Romania to the United Kingdom and the United States to commit the crime of human trafficking. Authorities allege that two of the suspects “misled” the victims into believing that they intended to enter into a marriage/cohabitation relationship, while driving the victims to Romania and then subjecting them to physical violence and He sexually assaulted her forcibly.

Authorities also said that a victim was raped by a suspect on two separate occasions in March 2022. The DIICOT statement said at least six victims had been identified who were allegedly “sexually exploited by an organized criminal group”.

DICOT said on Thursday that the four suspects would remain in custody for 24 hours after questioning.

Andrew Tate’s arrest in Romania comes after he engaged in a Twitter spat with climate activist Greta Thunberg, in which she bragged about the “huge emissions” from her luxury cars on Tuesday. He asked Thunberg for her email to send her a complete catalog of her car collection, and the climate activist replied tauntingly, “Yes, please enlighten me. Email me at smalld***energy@getalife.com.”

CNN’s Irene Nassar and Lauren Kent contributed to this report.