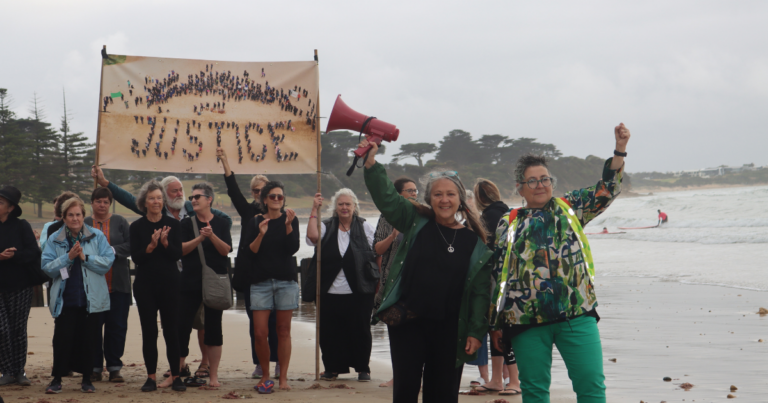 A WEEK of rallies taking place across the nation took center stage on the Surf Coast with women calling for justice and action against gendered violence in workplaces and at homes.

The Surf Coast’s March4Justice again returned to Cosy Corner on Torquay’s Esplanade where dozens of women and men made their voices heard and urged government representatives to promote equality.

The march involved a percussion group providing a musical overtone, a large photo banner displaying ‘justice’ from last year’s event, a moment’s silence for women who have been the victim of gendered violence and speeches by organizers outlining the reasons for the gathering.

Organizers and protesters made four key demands on Sunday as will rallies spanning Australia.
First and foremost is the overall safety of women in Australia.

Thirdly, marchers are also demanding safe environments at home and at work.

To help achieve this, the movement recommends that all 55 recommendations in the Australian Human Rights Commission’s [email protected] report of the National Inquiry into Sexual Harassment in Australian Workplaces 2020.

Lastly, marchers are advocating for major criminal justice reforms by way of a national review by all attorney generals in developing new approaches to sexual assault trials and criminal procedure.

Event co-organizer Julie Dyer said the government needs to be more aware of what is happening in the world.

“Please listen to us, there are people who are coming out to raise their concerns and they deserve to be listened to,” Ms Dyer said.

“It’s been just over a year since we were last here and it’s a bit sad that we had to organize this event again, but hopefully we won’t have to come out again next year.”

A second March4Justice in the region also took place in Geelong later the same day where there were numerous guest speakers at Geelong’s Trade Hall before women marched through the CBD.

Co-organiser Laura Connor said systemic change in gendered violence needs to come in from the federal government level and filter down to all facets of society.

“We want to see real action, actual policies that will create change in our society,” Ms Connor said.

“Change needs to come in from the top and trickle all the way through into all our workplaces, our schools, our homes and open a dialogue about family violence.

“We’ve had nothing but hot air and platitudes from our prime minister and we want to see real action, no more hollow promises and I’m sure we will be seeing a lot of them coming up to the election.”

For more information on March4Justice head to the website www.march4justice.org.au.