COVID-19 cases will reverse for Christmas 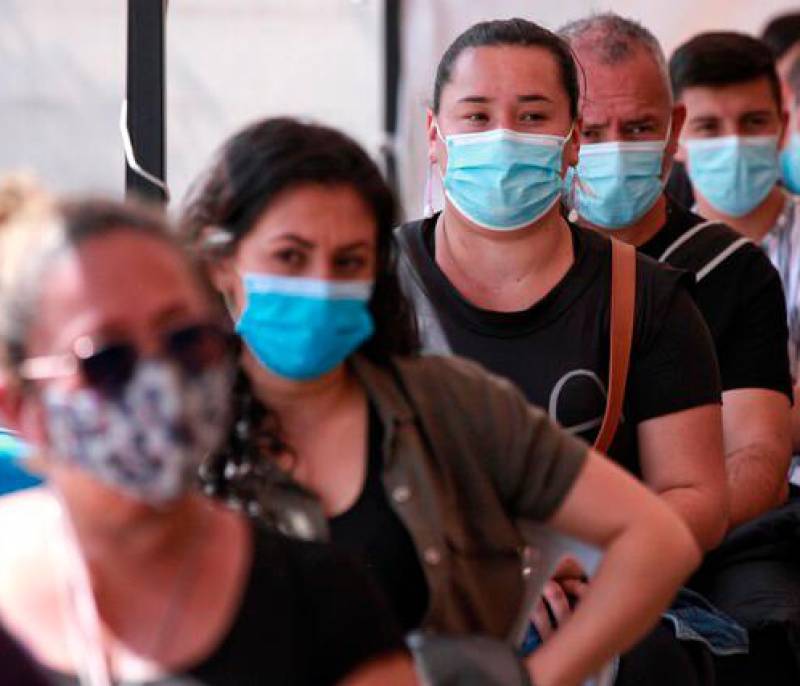 Covid-19 has returned with everything for Christmas. The increase in infections and deaths from the pandemic is such that the Minister of Health, Carolina Corcho, announced that the portfolio is once again considering the need for the use of masks in open and closed spaces with crowds.

In the week between 28 November and 2 December, 3,252 infections were detected, a figure that confirmed the health authorities’ forecast that the first days of December would mark a new record, at least in relation to figures from recent months.

Considering that the habit of taking tests has been lost, it is possible that many more will be affected. But it is also true that the variants in circulation have less lethality or that vaccinations work better now as a result of vaccinations and other infections: the last number of deaths in the country was reported as 14 on 24 November.

The national government is analyzing a return to masks to avoid a new spike in cases, which would strain the health system, especially in a season such as December, which already has a shortage of hospital beds due to gunpowder burns and road accidents. There is significant demand. ,

In Corchow’s words: “This is a proposal that is being considered, if it happens, it will be for people over the age of 2 in open and closed places where there are crowds, as well as in 3 places Except where they are used essentially, which are: Institutional Health Service Providers (IPS), Nursing Homes and Public Transport”.

This situation goes well beyond Colombia. Infections have increased in neighboring Ecuador in recent weeks, with 3,549 confirmed cases; In Paraguay, the record quadrupled the previous measure to reach 621, and in Argentina there is talk of a 300% increase with a record 3,323 infections in the last period. (Pfizer’s vaccines work and have been tested, don’t believe the myths!)

Like Colombia, Argentina will again use face masks to prevent another peak of the pandemic. And in France they are also considering implementing masks due to the risk of a severe triple pandemic of Influenza, Bronchiolitis and COVID-19.

What’s more, China had just gone through a period of protests over the intensity of biosecurity measures that were affecting civil liberties. The Asian country presents an average of 31,824 active cases, of which 87% are asymptomatic.

In just one week in Antioquia they recorded 80 to 200 infections. However, it is not yet possible to talk about the new peak of infection in the department as it needs at least 3 weeks to declare it. Of course: There are already two consecutive cases in which the region has been in the top three in new cases.

What’s more, there is also no real clarity on how many infections there are because clinical trials for the pandemic were limited to those who are at higher risk due to their co-morbidities.

This number “can only be confirmed by proper follow-up based on epidemiological dynamics, but everything leads to an increase in cases,” says Pablo Patino, a doctor and professor at the Faculty of Medicine of the University of Antioquia.

The health ministry only reports infections and deaths once a week, every Thursday, so we’ll have to wait until the next day of candles to confirm this pattern holds.

The problem, and of great medical concern, is that the gatherings become overcrowded for the Christmas and New Year season to view lights, make novenas, or receive Christmas bonuses.

The resurgence of the coronavirus comes amid a toxic cocktail that combines the presence of other variants, carelessness with vaccinations and the rainy season in Colombia that has several of the country’s departments under a state of emergency.

In the past week alone, the National Disaster Risk Management Unit (Ungrd) recorded significant damage caused by rainfall ending in floods and landslides in the departments of Cauca, Cundinamarca, Norte de Santander, Magdalena, Meta and Córdoba. Sunday in Pueblo Rico, Risaralda. (“It is being analyzed”: Minsalud clarifies about mandatory use of face masks)

These emergencies, in addition to severe damage to infrastructure, are leaving a silent toll: people catch colds because of the change in weather. Those giving flu may be infection with the coronavirus, influenza, some adenoviruses or the common cold, but to determine this, tests and a specialist review are needed.

Influenza, for example, is a respiratory disease with acute symptoms that, as has been the case with Covid, can also lead to an ICU. There are other diseases that affect children more than anything, such as respiratory syncytial virus, which still exists.

Doctor Patino explains that one of the main reasons for the increase in respiratory diseases is environmental conditions in the region that favor the circulation of the virus. Weather changes are everywhere.

“The alternation of heat with periods of rain generates higher evaporation of water particles and this is one of the ways in which the virus is carried. Cold and damp areas are an important factor in people’s reaction and contagion is high due to rains,” says the doctor.

Infections that spread these days can also come together.

It is possible to present with flu and COVID-19 symptoms at the same time, but this does not lead to complications. In contrast, if you get influenza and COVID, it is different, a combination that can cause more severe illness. There are vaccines for both.

Another reason why the infection does not stop is that new variants with high infectious potential and large circulation are increasingly appearing.

At the time that was the case with Omicron and Delta, while now the concern is with the new BQ.1 sub-variant. It is popularly known as the “hound of hell”.

The prevalence of BQ.1 in Colombia was confirmed by the National Institute of Health from 21 November, and a genomic surveillance report showed its presence in 34.6% of new infections. In simple terms: More than a third of new coronavirus cases have to do with the “Hound of Hell”. (Note: “Perro del Infierno”, the subvariant of COVID-19 that circulates in Colombia)

The question of strain is linked to the potential of the vaccine. When the first drugs were created, they were based on characteristics of the first lineage of the pandemic, but that virus mutated after living with COVID-19 for three years.

The number of variables that emerge over time is difficult to estimate, as is their intensity and contagion. There is also a possibility that there are new variants that are more intense than the variants known so far. Everything will depend on the evolution of the virus.

Although the vaccination process has been successful in reducing cases and attenuating the virus, there are still people who have not received the first vaccine or booster dose. It will be difficult to eliminate the virus without the entire population getting the drug.

Just over 36.8 million people have received their full regimen, a statistic that includes single-dose vaccines or two doses of drugs that require two punctures, such as those from Moderna, Pfizer and Sinovac.

Although the third dose was enabled for the entire population from November 2021, in addition to the second booster (i.e., the fourth dose) was also approved in mid-2022, vaccination rates have not been as expected.

Only 14.4 million booster doses have been administered and only a fourth of the 2.1 million injections supplied nationwide are safe, according to the most recent report from the Health Portfolio with data updated as of December 29, November.

For this reason, Minister Corcho drew attention to the fact that “those who do not have a vaccination plan or who have respiratory symptoms, co-morbidities, should use a surgical mask.”

People who have heart disease, obesity, diabetes, asthma, those undergoing chemotherapy treatment or other procedures that weaken the immune system, among other factors, are those who are at high risk in this new phase of the pandemic. .

Epidemiologist Giraldo points out that recent studies suggest that existing vaccines have lost their effectiveness over time “because these new versions have come out.” Therefore, instead of thinking of a fifth dose of vaccines, what should be done is the improvement of biologics that are more adapted to the current context of the disease. (Know the most frequent symptoms of persistent COVID)

Care against COVID-19 continues with the same guidelines that were given when the pandemic broke out: use of face masks, judicious distancing from other people, hand washing and avoiding crowds. That last point will be important to take care of yourself this month, despite the festive and family atmosphere.

The symptoms of COVID-19 remain the same: shortness of breath, cough, congestion, fever, loss of taste and smell; In some cases, diarrhea, muscle pain, sore throat, headache, or red eyes. By paying attention to these signs, and isolating yourself if you develop symptoms, you can approach Christmas and the New Year with peace of mind that you are taking care of your loved ones.

#SeguimosEnPandemic And vaccination remains the most effective way to save lives. Complete your schedule or booster dose against COVID-19. Find a vaccination post in your city or municipality today and get your hand out for life! pic.twitter.com/Cyt567d9L0