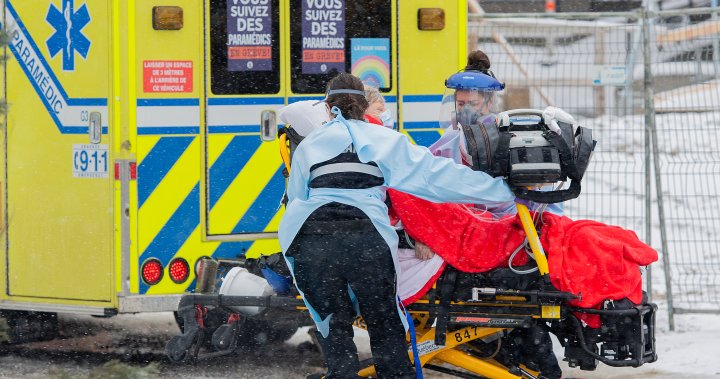 Hospitalizations due to COVID-19 across Canada surpassed 10,000 patients for the first time on Monday, an alarming sign of the impact of the highly-contagious Omicron variant on the country’s health care system.

A global news analysis of provincial health data shows there are now 10,038 patients in hospital care. Of them, 1,148 people are in intensive care units.

The country broke hospitalization records for the first time on January 5, when the number of patients crossed 5,000. That number has nearly doubled in just two weeks, as several provinces break their own records and others come close to doing so.

Most of the hospitals are currently being operated by Ontario and Quebec. Ontario reported 578 COVID-19 patients in intensive care units and 3,887 patients in hospital overall, up from 3,595 a day earlier. Meanwhile, Quebec reported a new record of 3,381 hospitalized COVID-19 patients, including 286 in the ICU.

Yet there has been a boom in other parts of the country as well. Alberta’s number of patients crossed 1,000 for the first time since mid-October, as the province began to recover from its deadly fourth wave of the pandemic. British Columbia and Manitoba set new records for 819 and 569 active COVID-19 patients, respectively.

Meanwhile, the chain of deaths has also started. As of Monday, the seven-day average of new deaths from COVID-19 rose to 116. About 150 new deaths were reported on Monday alone, although some occurred over the weekend.

Omicron and vaccines: Experts break down the science behind COVID-19 jabs

Meanwhile, confirmed cases have started to decline, which is expected to lead to hospitalizations and deaths soon.

As of Monday, the seven-day average of daily cases sits above 29,300, about 35 per cent lower than the record high of more than 45,500 cases per day nearly two weeks ago.

However, federal and provincial health officials have warned that the true number of cases nationwide could be 10 times higher because of how contagious Omicron is. Provinces have restricted testing capacity to prevent laboratories from becoming overwhelmed.

The agency authorized Paxlovid for adult patients with mild or moderate COVID-19 who are at higher risk of becoming more seriously ill. Health Canada did not authorize it for use on adolescents or patients who are already hospitalized due to COVID-19.

Health Canada’s chief medical advisor Dr. Supriya Sharma said clinical trials showed that treatment with paxlovid reduced the risk of hospitalization and death from COVID-19 by 89 percent, when Medications were started within three days of the onset of symptoms, and up to 85 percent when taken within five days.

Health Canada’s approval recommends that the pill be taken within five days of symptom onset.

“I think the timing of this (authority) is also very important,” she said. “The bottom line is … it potentially keeps people out of hospitals.”

Federal Health Minister Jean-Yves Duclos said Canada had already received the first shipment of 30,000 treatment courses of the Pfizer drug, with another 120,000 expected through March. He said distribution would begin “immediately” in the provinces and territories.

“A lot of it depends on the starting supply and we all know that the supply will not be very good in the beginning,” she said. “For the omicron wave, it could contribute, but it would not be a significant contributor to the current wave.

“So that’s another layer, another tool as we progress over the next month.”

Tam said provinces and territories will determine how best to make use of the limited supply of the drug, adding that deployment in jurisdictions will be on a per-capita basis, adding PaxLovid is not to be seen as a substitute for vaccination. needed.

Conservative Party leader Erin O’Toole said the initial shipment of 30,000 treatment courses was “inadequate”, requiring the government to “dramatically ramp up” the number of pills on order and bring them to the provinces immediately.

News of Paxlovid’s authorization came as Canadian students in four provinces returned to in-person learning, although heavy winter snowfall in parts of Ontario and Quebec meant another virtual school day for many.

Students in Nova Scotia and Manitoba also returned to class after starting the new year online because of a record-high case count. Provinces switched to distance learning to take pressure off the health care system and give schools more time to improve safety measures.

Some Manitoba high-school students staged a walkout on Monday to protest their return amid rising COVID-19 numbers. The students called for increased safety measures in classrooms, better access to masks and the option of online learning.

Meanwhile, in Newfoundland and Labrador, officials are waiting at least another week for an easing of public health restrictions following a surge in COVID-19 that began in late December. The province moved to Alert Level 4 on January 4 and will remain there until at least January 24.

7:29
This week may be the peak of the fifth wave, warn experts

This week may be the peak of the fifth wave, warn experts

Ahead of an official update scheduled for Tuesday – the day when public health restrictions are due to end – British Columbia said it would keep gyms and other fitness centers closed indefinitely. The school board will now also have to collect information about the vaccination status of its staff.

As of Monday, about 82 percent of eligible Canadians aged five and older have been fully vaccinated against COVID-19 with two doses.