COVID-19 is present in more animals than we thought 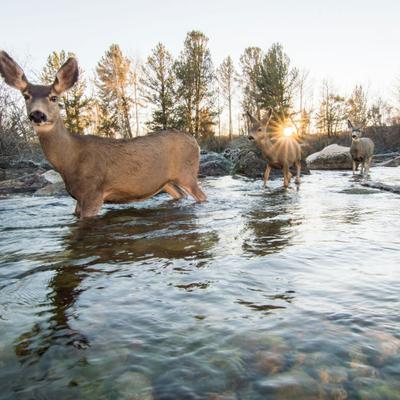 We tend to think of COVID-19 as a human pandemic, but it is much more than that. The virus that causes the disease, SARS-CoV-2, can infect a wide and growing range of animals, both captive and wild.

So far, the virus has been detected in more than 100 domestic cats and dogs, as well as in captive tigers, lions, gorillas, snow leopards, otters and spotted hyenas, according to the US Department of Agriculture. US zoo staff have recorded a positive case in a binturong, coati, puma, domestic ferret, fishing cat, bobcat, baboon and squirrel monkey.

(Connected: Everything you need to know about the coronavirus and domestic cats,

In the United States, only three wild species — mink, mule deer and white-tailed deer — have tested positive, according to the USDA. In other parts of the world, cases have been reported of wild black-tailed tamarins, big hairy armadillos and a panther.

But tests in wild animals are scarce, and it is likely that COVID-19 has affected many more species, new research is finding. “I think the prevalence in wild animals is much higher than previously thought,” says Joseph Hoyt, an epidemiologist at Virginia Tech in the United States.

How does SARS-CoV-2 infect such a wide range of species and what are the implications?

(Connected: Kraken, the most contagious variant of COVID-19,

One of the main reasons lies in a complex receptor found in all mammals, called ACE-2. This receptor plays an important role in the regulation of blood pressure and other bodily functions.

Once the SARS-CoV-2 spike protein enters the body, it begins to infect host cells by binding to the ACE-2 receptor, which is widespread in the upper respiratory tract and sinuses of humans and many other mammals.

The physical structure of the ACE-2 receptor varies relatively little between vertebrate species compared to other similar proteins, says virologist Craig Willen of Yale University. Still, there are enough small changes that scientists initially thought it would be highly unlikely that some mammals would become infected.

But this view has changed, as animals that were initially thought to be less susceptible have shown the opposite. It now appears that many, if not most, mammalian ACE-2 receptors are hypersensitive and are not a limiting factor for viruses.

“It seems like it’s a good enough … even if it’s not a perfect match,” says Rick Bushman, a professor at the University of Pennsylvania School of Medicine who studies host-microbe interactions.

Instead, there are likely many other factors at play that determine vulnerability, the details of which are almost entirely unknown.

(Connected: How long does COVID-19 stay in our body?,

We already know that the virus can infect and spread wild mink and white-tailed deer, and both species have at least one verified case where the virus passed from humans to animals and back to humans. In addition to mink, pet ferrets and golden hamsters also easily catch the virus in captivity.

Carla Finkielstein, co-author of the paper with Hoyt and conservation biologist Amanda Goldberg, was surprised when she first found evidence of SARS-CoV-2 infection in opossums in Virginia, USA.

(Connected: This was the first case of coronavirus found in a wild animal in 2020,

“We were concerned, because it means it’s jumping” into distantly related mammals, Finkielstein says. “Possums are biologically very different from us,” says Goldberg.

Opossums are marsupials that give birth to bee-sized young, which suckle from the nipples of their mother’s pouch. Marsupials diverged from placental mammals (which include many true mammals) more than 150 million years ago.

If SARS-CoV-2 can infect opossums, they reasoned, it could potentially infect a greater variety of mammals. In fact, the team found signs of SARS-CoV-2 antibodies in a significant percentage of six species of urban wildlife in southwestern Virginia. They also obtained positive PCR results (which are indicative of infection, but do not prove it) in two of these species and four others, including red foxes and lynx.

(Connected: How do diseases spread from animals to humans?,

But how do wild animals like deer get exposed to the virus?

There is still no answer to the question, but there are theories. Wild animals can become infected through contact with human waste or sewage, or by inhaling the virus when they are around people. Exposure can also occur through interaction with pets, such as dogs and cats, or captive deer, which may carry the virus.

But “I think everyone agrees … that nobody knows,” Bushman says.

One reason animal infections are important is that they represent new reservoirs for the virus, where it can live and acquire new mutations, which could, in theory, help it spread better. if it reverts to humans.

“More transmission between more species is not something we want to see,” says Ernst.

(Connected: Which animals suffer from COVID-19 and why,

The ability of SARS-CoV-2 to infect wildlife—an animal version of a hidden panzootic—pandemic is almost entirely unknown, says Finkielstein.

Infected animals usually have mild symptoms, but experts know almost nothing about how different forms of the virus affect most animals. Sometimes the infection is fatal. The virus appears to kill a small percentage of infected mink, and three snow leopards died from COVID-19 complications at the Lincoln, Nebraska, children’s zoo.

Willen warns that we don’t really know how sick wild animals can be. He gives the example of the chimpanzee simian immunodeficiency virus (SIVcpz), which jumped to humans and became HIV-1. For a long time it was believed that SIV only caused infection in humans. It was long believed that SIV caused only mild symptoms in chimpanzees, but research eventually determined that the virus can cause an AIDS-like disease in animals, often shortening their lifespans.

The effects of viruses are particularly difficult to study in wild animals, says Hoyt, especially at the ecological level.

“We don’t know the consequences of this for wildlife,” agrees Finkelstein. “This is another aspect that has been largely ignored.”