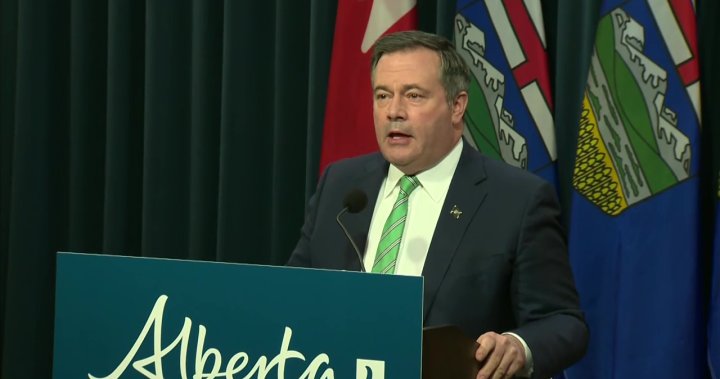 Alberta’s COVID-19 vaccine passport program will cease to exist when the clock strikes midnight on Feb. 9, and almost all public health restrictions will be lifted March 1 if the situation in hospitals continues to improve, Premier Jason Kenney announced Tuesday.

At a news conference, the premier said while the restrictions exemption program (REP) served its purpose of increasing vaccination rates, it is no longer an effective tool for doing so and no longer needed, especially with so many vaccinated people still contracting the highly- transmissible Omicron variant of COVID-19.

“(The REP) has made a huge difference,” Kenny said. “It has saved many lives.”

However, he said he does not believe the program can serve any useful purpose going forward, unless one were to change the definition of full vaccination to three doses of a vaccine or more.

Kenney said scrapping REP was among a number of changes to the province’s pandemic response that were approved by his government’s COVID-19 cabinet committee earlier in the day.


Officials in some municipalities, including Alberta’s two largest cities, have said they would look at whether to previously take steps to keep some public health restrictions through bylaws if the province lifts them before they think it is prudent to do so.

Kenny said he would like to speak with mayors who are considering taking such actions.

“I’d like to know if it is there intention to create an entirely separate municipal public health policy,” he said. “I think that would be a serious problem.”

Kenney acknowledged that in a free market system, businesses who want to continue to require people to be vaccinated before entering will have the right to do so.

“(That) may appeal to a certain kind of customer,” he said, adding that he hopes there will come a time that the province can do away with providing QR codes that prove people are vaccinated. “(The) problem is we have a lot of Albertans who — especially in the cold winter — love traveling.

“As long as there is a federal requirement (for air travelers to be vaccinated)… we have to offer that as a service.”

He said his government will follow a three-step plan to removing restrictions, saying “Alberta will move on but will do so carefully… prudently.” He said most restrictions affecting children and youths will be lifted this weekend, including requirements for children 12 and under to wear masks.

“Kids have been subjected to a heavy and I think unfair burden throughout the pandemic, given the very low threat that COVID-19 poses to the health of children,” Kenney said.

Phase 1 of the province’s plan will also see capacity limits be removed for venues that can host 500 people or less. Kenny said the target date for Phase 2 of the plan is midnight on March 1. That phase would also see capacity limits be lifted for all venues, masking no longer be required indoors and limits on indoor and outdoor gatherings be lifted. A number of other restrictions would be eased or removed altogether as well.

A target date for Phase 3 has yet to be determined, Kenny said, noting that phase would see people with COVID-19 no longer being required to self-isolate and COVID-19 outbreak protocols be lifted at continuing care homes.

For details about Alberta’s new three-stage plan to lift restrictions, please scroll to the bottom of this article.

Kenny said he believes it is clear Alberta’s number of COVID-19 infections involving the Omicron variant peaked about three weeks ago. He said hospital admissions linked to the coronavirus have been declining recently and that the province’s total number of active cases have dropped steadily in recent weeks. He also cited wastewater data as showing an improvement in the prevalence of COVID-19 in the province.

Kenney noted that some other Canadian provinces like Saskatchewan have already announced plans to lift most restrictions, as well as a number of US states and European countries.

“I know that some will say this is too much change and that we are moving too fast,” he said. “But please keep in mind that we have the benefit of being a few weeks behind other jurisdictions such as the United Kingdom.”

He said vaccine mandates and public health rules “must not become a permanent fixture in our lives,” and added the province has already been seeing widespread non-compliance with its rules anyway.

Kenney made the announcement as people protesting public health measures related to the pandemic continue to impede traffic near Coutts, Alta., impacting traffic north and south of the Canada-US Border.

When asked whether members of his government had been negotiating with protesters near Coutts on their demands to have health restrictions lifted, Kenney said no.

“Nobody has been negotiating with anybody engaged in illegal actions,” he said. “There are Albertans involved in that protest who have MLAs… (who) have a responsibility to listen to their constituents.”

Kenny added that the protests near Coutts are now lawful, and that they serve to “inconvenience thousands of law-abiding truckers who are just trying to make a living.”

At Tuesday’s news conference, Alberta’s chief medical officer of health Dr. Deena Hinshaw reported that the province has identified 13 more COVID-19 deaths in the past 24 hours, bringing the total number of coronavirus fatalities in Alberta to 3,686 since the pandemic began.

The number of people in Alberta hospitals with COVID-19 was at 1,623 on Tuesday afternoon, according to Alberta Health. That was up from 1,542 a day earlier. The number of COVID-19 patients in ICUs was at 129 on Tuesday, up from 118 on Monday.

Alberta Health reported Tuesday that the province had identified 1,667 new COVID-19 cases in the past 24 hours. Public health officials have noted that since only a limited number of Albertans are eligible for PCR tests, the true number of new coronavirus infections is likely at least 10 times higher than what the province reports.

Hinshaw said the province’s positivity rate is at about 36 per cent.

Kenny said despite heroic efforts of front-line health-care workers, he believes the COVID-19 pandemic exposed serious flaws in the province’s health-care system and said the number of beds and physicians the province has, as well as the wait times Albertans endure for to see health professionals, is “outrageous” considering how much money is spent on the health sector.

“We have to fix our health-care system first and foremost,” he said, noting governments can no longer rely on “the blunt instrument of damaging restrictions as a primary response” to health crises.

“We have to face the fact that we have had too little capacity to address a situation like this.”

Kenny said this concern is something that his government will address when it delivers its latest budget on Feb. 24.

The Opposition said the timing of the phased lifting of restrictions raises questions about the premier’s intent.

Shepherd said Kenney made the decision to ease restrictions Tuesday for political gain, not based on expert health advice. He claimed the premier accelerated this plan in part because of demands from the blockades and protests at the Coutts border, which entered their 11th day Tuesday.

The Opposition called for more of the health data justifying this decision to ease restrictions to be shared publicly.

The REP ends, along with most associated restrictions

Entertainment venues will continue to have some specific rules in place:
– Restrictions on sale of food and beverages and consumption while seated in audience settings will be removed
– Restrictions on closing times, alcohol service, table capacity in restaurants and interactive activities will remain in force

— With files from Emily Mertz and Karen Bartko, Global News