COVID-19: No change in BC restrictions, but province may see a drop in infections soon Globalnews.ca 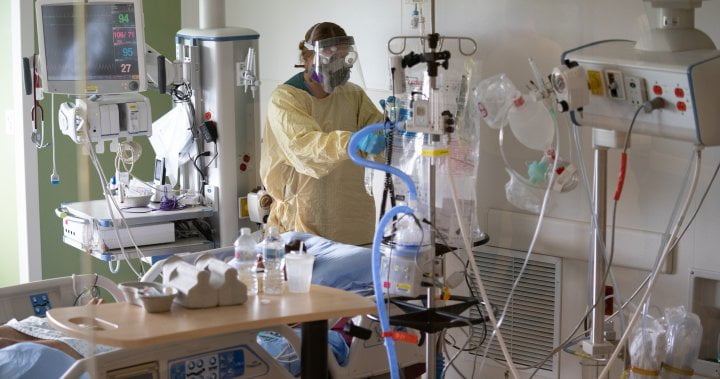 By the end of January, B.C. health officials are hoping that additional treatment options will be available to fight COVID-19, including antiviral drugs that are currently being reviewed by Health Canada.

This includes Pfizer’s paxlovid and Merck’s molnupiravir, which are both oral antiviral pills that can be taken at home to treat infections.

B.C.’s provincial health officer, Dr. Bonnie Henry, told a media briefing on Tuesday that while the province is still riding the Omicron version of the wave, “we may soon be entering where we see a decline.”

Hospitalization continues in BC with many people sick with the Delta version and the Omicron version.

Henry said there are currently three people in their 20s and one in their 30s battling COVID in the ICU. She said all four people had not been vaccinated.

“This strain of the virus is absolutely, mostly mild, in people who have the protection of the vaccine,” Henry said.

While those without vaccination have a higher risk of ending up in the hospital, and while vaccinated people can still contract Omicron, vaccination reduces the risk of hospitalization by about 50 percent, he said.

Henry said that about 60 to 70 percent of people who contract Omicron are less likely to need hospital care if they are fully vaccinated and that increases to about 80 to 90 percent with a booster dose. , said Henry.

The risk of hospitalization is 35 per 100,000 if unvaccinated and four per 100,000 if you have received a COVID-19 vaccine within the past six months.

The current restrictions on gatherings and events will remain unchanged for now, Henry said, until conditions improve.

However, when asked whether BC would consider following in Quebec’s footsteps and imposing a health tax on anyone who refuses vaccination, Health Minister Adrian Dix said it was not something the province was considering at this time. Has been doing.

As of Monday, 431 people were in hospital with COVID-19 in BC – an increase of 82 from Friday. 95 of them were in intensive care, a jump from only two.

Global News has learned that almost 60 percent of ICU patients are not vaccinated.

Legislative Bureau Chief Keith Baldrey said it appears people are being discharged early after being hospitalized for COVID, which supports the belief that Omicron is treating people at higher rates. infects, forcing more hospitalizations, but the hospital stay is not as long.

As of Monday, seven more people had died from complications from the virus, bringing the BC death toll since the start of the pandemic to 2,446, officials said.

3:34
Dr. Bonnie Henry BC. addressed the adverse effects of the COVID-19 vaccine in

Dr. Bonnie Henry BC. addressed the adverse effects of the COVID-19 vaccine in

Henry and Dix attended a Global News town hall Monday night, and took questions from the public about the province’s response to the pandemic, including vaccine mandates, booster shots and answers to the vaccine’s adverse effects.

Henry said that no deaths in BC have been linked to vaccines so far. A very small number of residents – “single digits” – have died within a month of receiving a shot, she said, but investigations confirmed that their deaths were not related to vaccination.

Editor’s Note: This is a revised story. The previous edition had incorrectly reported in the headline that BC had taken a record-breaking hospitalization.

IND vs ENG: Root, who was disappointed by England’s embarrassing defeat, won everyone’s heart with what he said