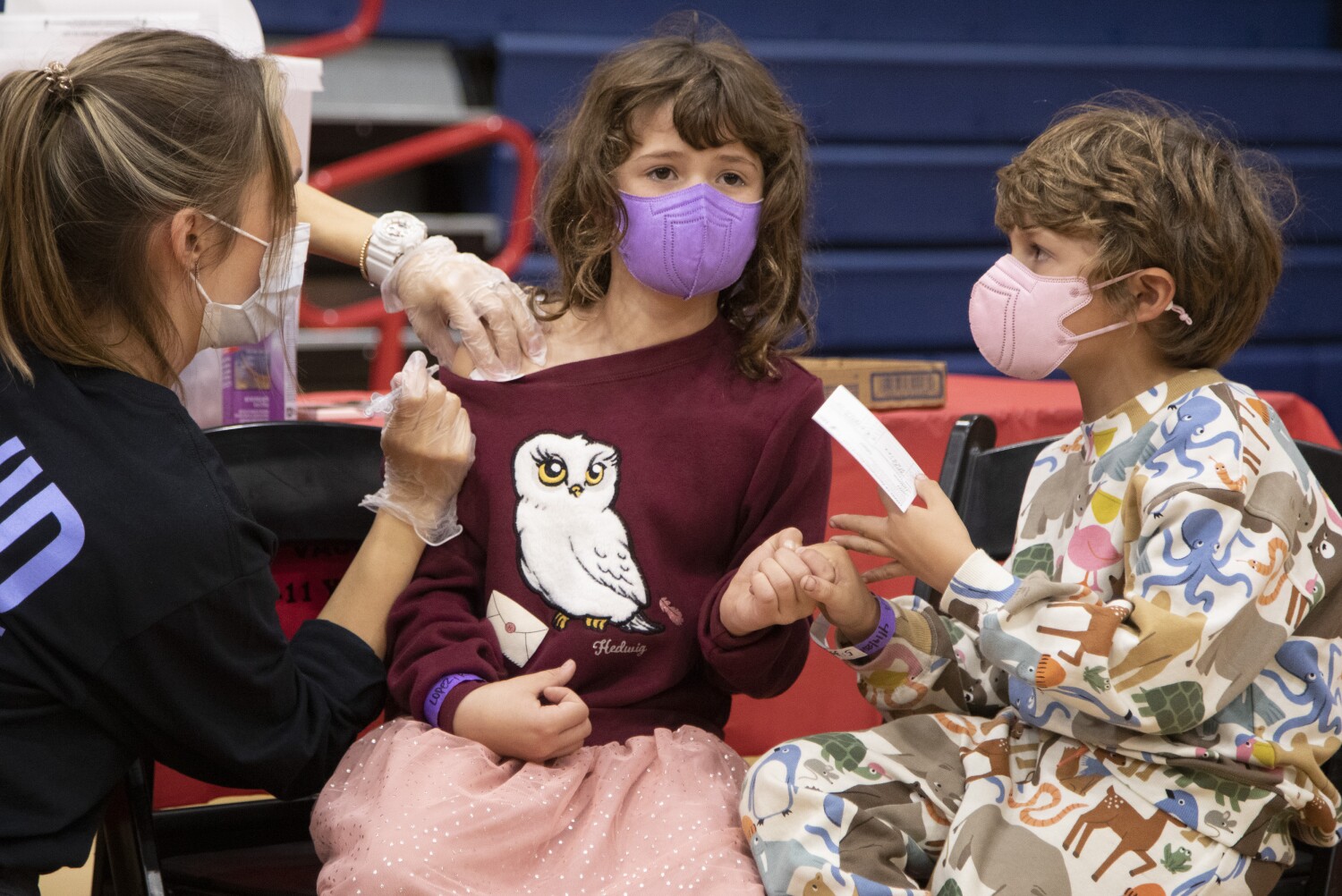 The number of COVID-19-related hospitalizations has skyrocketed in the Inner Empire and Central Valley, raising new concerns over whether this shift is a harbinger of a wider surge in California’s COVID-19 as the winter holidays approach.

Across the state, cases and hospitalizations are plateauing after months of decline. In some areas with relatively high vaccination rates, including the San Francisco Bay Area and Los Angeles County, hospital admissions remained fairly low.

Health officials have warned of a potential new rise in COVID-19 in California, as older adults who were vaccinated last winter – but not boosted – may experience a weakened immune system, putting them at greater risk of infection. and hospitalization, and as people gather more and more indoors, as the weather is cool and the holidays are approaching.

The demand for booster injections in California was lower than expected. And every infected Californian is increasingly transmitting the coronavirus to more people; As of Saturday, computer models estimated that each infected Californian, on average, transmitted the virus to 0.96 others; if this number exceeds 1, it will create the basis for further growth of the pandemic.

Officials hope stringent vaccination requirements in some of California’s most densely populated areas will help slow the spread of winter cases. In Los Angeles on Monday, a new city rule went into effect requiring visitors to show proof of full vaccination to visit places such as closed restaurants, gyms, movie theaters, hair and nail salons, but won’t go into effect until Thanksgiving.

Just a few weeks ago, officials in the San Joaquin Valley were optimistic that trends were heading in the right direction. But now officials say hospitals in Fresno County, the most populous county in the region, “have really never come out of the crisis,” said Dan Lynch, director of the Central California Emergency Medicine Agency.

“Large hospitals are likely to have between 110% and 130% of normal capacity. And they are all keeping intensive care patients back in their emergency rooms, ”Lynch said. “We see the hospital’s emergency departments are overcrowded.”

Most hospitals have been forced to postpone planned surgeries, and some patients requiring specialized care may need to be referred to other parts of California, officials said.

Many of the COVID-19 patients requiring hospitalization are unvaccinated people in their 30s, 40s and 50s, said Fresno County Temporary Physician Dr. Rais Vohra. Fresno County was forced to re-enact the measure on Wednesday to no longer automatically transport all 9-1-1 patients to emergency departments, a policy it ended on Oct.22 because officials believed the Delta variant was waning in the region. …

“If two weeks ago you asked me what I think was going to happen, I really thought we were going to have a nice, relaxing November,” Vohra said. Now “it was very humiliating just because this pandemic continues to challenge us, and this November plateau really interests us very much.”

Statewide, the rate is 10, and the two most populous regions have rates below that: Southern California is 8 and the Bay Area is 4. Some experts believe this is a sign of concern when the COVID-19 hospitalization rate is 5 or higher. for everyone. 100,000 inhabitants.

The most populous areas of Southern California have the lowest COVID-19 hospitalization rates in the Inland Empire, with San Bernardino and Riverside Counties reporting corresponding rates of 14 and 11. San Diego County reports 8; Orange County, 7; Los Angeles County 6 and Ventura 4.

Hospital admissions for COVID-19 have increased by over 27% since mid-October in both San Bernardino and Fresno counties; while in Riverside County the number has grown by 21% in the past two weeks.

While health officials are largely optimistic that the state’s relatively high vaccine coverage will keep conditions from deteriorating to the devastating levels seen last fall and winter, the calendar change carries many additional risks.

Colder weather, even in normally warmer parts of California, will increasingly push people to gather indoors, where the risk of coronavirus transmission is higher. The seasonality of the coronavirus itself is also obvious, which makes it easier to spread when temperatures drop.

A completed holiday schedule will also encourage people to travel and pack, perhaps in ways not seen since the start of the pandemic.

Add it all up and you have a potent recipe for yet another potential coronavirus resurgence.

This is already happening in other parts of the country.

“Even in places with high vaccination rates, such as New Hampshire and Vermont, you can see outbreaks and transmissions begin to develop in these northernmost counties, just like in Alaska,” said Dr. George Rutherford, an epidemiologist at the University of California at San Francisco and infectious disease expert. – said recently at the campus forum.

The largest concentration of coronavirus cases has spread from Montana, Idaho, North Dakota and Wyoming and spreads further south through Colorado, Utah, New Mexico and Arizona.

States with low vaccination rates such as Wyoming, where only 44.4% of residents are fully vaccinated, have one of the highest incidence rates in the country, as do several states with vaccination rates similar to California’s 61.8%, for example, Colorado (62.1%), according to Rutherford, New Mexico (62.5%) and Minnesota (61.6%).

That’s why Colorado, New Mexico and Minnesota could be warning signs for California’s future, Rutherford said. In these three states, weekly coronavirus incidence rates are three times higher than those of California; Wyoming is more than 3½ times worse than California.

Rutherford said that, relatively speaking, Los Angeles, Orange and Ventura counties are doing well, but warned that the incidence rates in San Diego, Riverside and San Bernardino counties are quite high.

All of these factors suggest that vaccinations must be urgently given to unvaccinated people, including children aged 5 to 11 who were eligible for vaccination just last week, Rutherford said. People recovering from COVID-19 still need to get immunized; A study published by the US Centers for Disease Control and Prevention found that COVID-19 survivors who went unvaccinated were five times more likely to get a new coronavirus infection compared to fully vaccinated people who were never infected.

According to Rutherford, immunocompromised people or the elderly need additional vaccinations to boost their immunity. The CDC says less than 33% of California’s fully vaccinated seniors aged 65 and over received a booster dose, “which is a big issue that needs to be addressed,” Rutherford said.

This means there is a race to strengthen more older adults before their immunity is weakened too much, Rutherford said. A study published recently in the journal Science found that all three COVID-19 vaccines available to Americans have lost some of their protective power, and vaccine effectiveness among a large group of veterans has fallen by 35-85%.

Some experts have already expressed the hope that the worst of the pandemic is over and a new surge is unlikely. Other experts, including Rutherford, are not so sure. While Rutherford said he expects California to “get out of this by spring,” November is likely to be crucial as it gives us a clue as to how the rest of fall and winter will unfold.

“If we come out on the other side and provide a high vaccination rate for people, a large vaccination coverage, then I think we can really throw away the masks and get back to normal life,” Rutherford said. “It’s possible that the Bay Area and urban Southern California could actually get away with high vaccination rates – especially if we can do it for these younger children – which will really create something like herd immunity.”

Rutherford added: “If not, we’ll have to wait longer.”

The future of the California pandemic will also depend on vaccinating more people around the world, reducing the risk of an even more problematic option, Rutherford said.

Los Angeles County’s month-long mask-wearing ban is likely to remain in effect until the end of the calendar year. Special government rules for so-called mega-events, which originally expired this month, have instead been extended indefinitely.

“We’re worried about the winter, to be honest,” Los Angeles County Health Director Barbara Ferrer said at a recent briefing. “We don’t like what we see in Europe. We know this virus has a seasonality and we cannot escape this reality. We know that people go to their homes more often, even here in Los Angeles County, when it gets colder. And we know that the holidays are coming. “

According to a recent study commissioned by the American Hotel and Lodging Assn., 29% of Americans said they were likely to go to Thanksgiving – up from 21% last year. The proportion of people who said they were most likely to do it at Christmas, 33%, also rose from 24% last year.

Of those surveyed, 58% said they plan to spend their vacation somewhere by car due to the pandemic.

Unlike last year, health officials are not explicitly advising residents to avoid traveling on holidays. Instead, they reiterate the importance of taking precautions.

“This is where people, vaccinated or not, really need to continue to apply the preventive measures that we have talked about since the beginning of this pandemic, which include frequent hand washing, wearing a mask, trying to keep a distance, staying in well-ventilated areas,” she said. Regina Chincio-Kwong, Orange County Assistant Medical Officer.