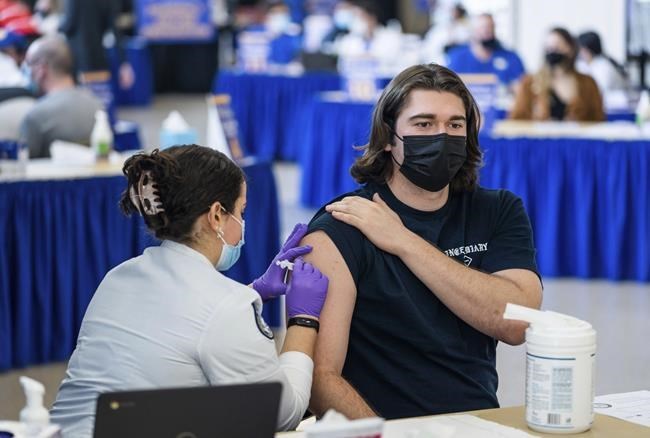 NEW YORK (AP) — The COVID-19 booster drive in the US is losing steam, worrying health experts who have pleaded with Americans to get an extra shot to shore up their protection against the highly contagious omicron variant.

NEW YORK (AP) — The COVID-19 booster drive in the US is losing steam, worrying health experts who have pleaded with Americans to get an extra shot to shore up their protection against the highly contagious omicron variant.

Just 40% of fully vaccinated Americans have received a booster dose, according to the Centers for Disease Control and Prevention. And the average number of booster shots dispensed per day in the US has plummeted from a peak of 1 million in early December to about 490,000 as of last week.

Also, a new poll from The Associated Press-NORC Center for Public Affairs Research found that Americans are more likely to see the initial vaccinations — rather than a booster — as essential.

Overall, the US vaccination campaign has been sluggish. More than 13 months after it began, just 63% of Americans, or 210 million people, are fully vaccinated with the initial rounds of shots. Mandates that could raise those numbers have been hobbled by legal challenges.

Vaccination numbers are stagant in states such as Wyoming, Idaho, Mississippi and Alabama, which have been hovering below 50%.

In Wyoming, 44% are fully vaccinated, up just slightly from 41% in September. To boost numbers, the state has been running TV ads with health care workers giving grim accounts of unvaccinated people struggling with COVID-19.

“Certainly we would like to see higher rates. But it would be wrong for anyone to think that the rates we have due to lack of effort,” Wyoming Health Department spokeswoman Kim Deti said Tuesday.

Read Also:  Transmission of infectious SARS-CoV-2 via fomites is possible but unlikely to occur in real-life scenarios, study concludes

And in neighboring Idaho, which also has one of the country’s lowest vaccination rates, the number of people getting their first vaccine dose has remained under 1,000 almost every day this year and the number getting booster shots is also declining. Still, officials say they won’t give up.

“I don’t like to use the word ‘resigned,’” said Elke Shaw-Tulloch, administrator of the Idaho Division of Public Health. “I think we just need to keep saying it over and over again, how important it is.”

At the other end of the spectrum, Vermont is a national leader in the percentage of people who have been fully vaccinated and received a booster shot. About 60% of the population over 18 has gotten a booster. But it’s not enough, said Vermont Health Commissioner Mark Levine.

“I’d love to see that percentage much closer to 90%,” Levine said.

The US and many other nations have been urging adults to get boosters because the vaccine’s protection can wane. Also, research has shown that while the vaccines have proved less effective against omicron, boosters can rev up the body’s defenses against the threat.

As for why an estimated 86 million Americans who have been fully vaccinated and are eligible for a booster have not yet gotten one, Schwartz said public confusion is one important reason.

“I think the evidence is now overwhelming that the booster is not simply an optional supplement, but it is a foundational part of protection,” he said. “But clearly that message has been lost.”

The need for all Americans to get boosters was initially debated by scientists, and at first the government recommended only that certain groups of people, such as senior citizens, get additional doses. The arrival of the omicron, and additional evidence about falling immunity, showed more clearly a widespread need for boosters.

Read Also:  I am a Pediatric Brain Surgeon and I am concerned about the impact of delayed diagnosis on my patients due to COVID-19

But the message “has been lost in the sea of ​​changing recommendations and guidance,” Schwartz said.

The AP-NORC Center poll found that 59% of Americans think it is essential that they receive a vaccine to fully participate in public life without feeling at risk of COVID-19 infection. Only 47% say the same about a booster shot.

Keller Anne Ruble, 32, of Denver, received her two doses of the Moderna vaccine but hasn’t gotten her booster. She said she had a bad reaction to the second dose and was in bed for four days with a fever and flu-like symptoms.

“I believe in the power of vaccines, and I know that’s going to protect me,” said Ruble, the owner of a greeting card sending service. But the vaccine “just knocked me out completely and freaked me out about getting the booster.”

She said she does plan to get the booster in the next few weeks and in the meantime wears an N95 mask and tries to stay home.

“I just don’t want to get COVID in general,” she said. “It does scare me.”

Blake Hassler, 26, of Nashville, Tennessee, said he doesn’t plan to get the booster. He received Pfizer’s two doses last year after having a mild case of COVID-19 in 2020. He said he considers himself to be in a low-risk category.

“At this point, we need to focus on prevention of serious illness at the onset of symptoms rather than creating a new shot every six weeks and mandates more divisive,” he said.

Cruise ships return to BC but COVID concerns remain

COVID-19 booster drive is faltering in the US

Target capital of new airstrikes in the Tigray region of Ethiopia