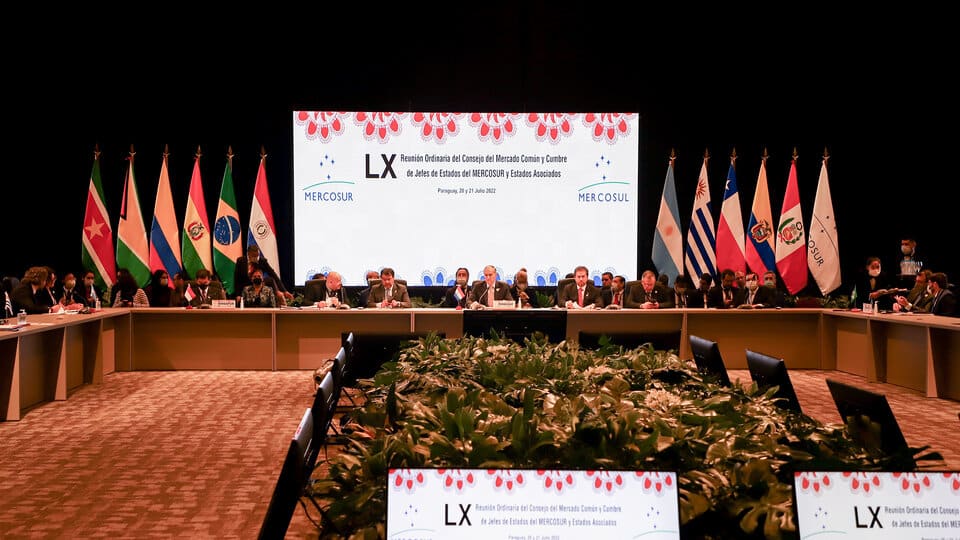 For the first time in two years after the pandemic, President Alberto Fernández will attend the Mercosur Heads of State summit in person. Uruguay’s progress towards a free trade agreement with China will be debated at the meeting in the Paraguayan city of Luc. The dispute over easing rules to facilitate trade agreements has been long-standing and also surfaced last Wednesday, when foreign ministers from MERCOSUR member states met and Uruguay’s representative reaffirmed the “strength”. To “negotiate with third countries outside the territory” of their country. The Argentine delegation questioned the neighboring country’s “unilateral” position, but later sought to prevent escalation of tensions. “We would be weak without Mercosur,” Foreign Minister Santiago Cafiero insisted during the meeting on what would be the president’s position on Thursday. On the other hand, the novelty of the meeting of foreign ministers was that, after more than a year of negotiations (mainly between Argentina and Brazil), MERCOSUR agreed to cut the general external tariffs by 10 percent.

“We are ready to give this discussion to you all. The solution should be creative, adapt to the stage in which we live and take into account our different ideas and structures. Some use the term ‘modernisation’. For Argentina, ‘modernization’ does not mean breaking the bloc and making unilateral decisions, but assuming the responsibility to transform and deepen the integration process,” said Santiago Cafiero during the ordinary meeting of the Mercosur Common Market Council in Paraguay. Said, a country that holds a temporary presidency is a bloc. Under the watchful eye of his peers in Uruguay (Francisco Bustillo), Brazil (Carlos Franca) and Paraguay (Jlio César Ariola Ramírez), Cafiero took aim at the announcement that Uruguay’s President Luis Lacalle Pau had made a few weeks earlier. Talks begin with Beijing to advance a free trade agreement. According to the Treaty of Asuncion – the founding text of MERCOSUR – any commercial agreement of this type with a country that is not a member of the bloc must be ratified by all MERCOSUR participating countries. That’s why, for some time now, Uruguay has called for the bloc to “modernize” (a position that Argentina vehemently opposes).

During his speech, Uruguay’s foreign minister responded to Cafiero and reaffirmed his government’s intention to proceed with a treaty with China. “We reaffirm our right to negotiate with countries and blocs outside the region. At the same time, we maintain our firm commitment to the integration process,” said Bustillo, who stressed that Mercosur should be “a realist”. And the integration process should be carried forward in a practical manner. “It is necessary to expand access to third markets,” the Uruguayan official insisted and once again called on his peers to “modernize” Mercosur.

“For us, ‘modernization’ means working with new tools within and outside the integration process: we have peace, we have food, we have energy, we have scientific and technological capabilities and we have our people. “Our companies and our cultures are connected. It’s about a platform of flesh and blood that we can’t waste,” Cafeiro declared at the summit a few minutes ago, similarly to President Alberto Fernández. will be retained, as was learned by Pageina 12, during a meeting with the rest of the presidents of MERCOSUR’s member states on Thursday morning (the only one who would not participate would be the President of Brazil, Jair Bolsonaro). “We will be weak without MERCOSUR. We will have less strength to cope with changes in the forms of production and trade outside the bloc”, insisted the former Chief of Staff, and through the closing, he reflected: “ On a planet not only regional but fragmented, with downward development projections from all international organizations, with dire problems of inequality and even famine, can one imagine with their heart that they Would it be better without neighbors and brothers? By his side was also the secretary of international economic relations, Cecilia Todeska.

Beyond counterpoints, from the Ministry of External Affairs he underestimated the situation in the neighboring country. “It is their political smog, they use it for internal consumption of the situation,” explained sources close to Cafiero, who recalled that Lacalle Pau himself warned when Tabare Vazquez was president in 2017, “let alone go ahead.” About the consequences of the trade agreement with China. From the national government they also know that China’s real interest is to insert itself into the markets of Brazil and Argentina: “Whether China to close with Uruguay or with the bloc Wants? They are talks of years,” slipped the foreign ministry.

In addition to differences with Uruguay, the national government celebrated an agreement reached regarding a reduction of 10 percent of the normal external tariff for imports from outside the region. Since 2019, Brazil has been seeking to reduce tariffs – with the original proposal to reduce all tariffs by 50 percent – ​​but after lengthy negotiations, it has sought to authorize states to reduce tariffs by 10 percent. However, excluding such sectors as motor vehicles, textiles, footwear, toys and dairy products. All sensitive areas for Argentina. “The agreement preserves the Argentine interest in this universe not to include the automotive sector, which is the main sector in Argentina’s exports to Brazil, as well as preserve special arrangements that allow higher than normal external tariffs in sensitive areas. maintain tariff protection”, highlighted from the Ministry of External Affairs.