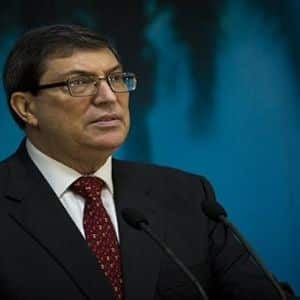 The Cuban Foreign Affairs Minister, Bruno Rodríguez, denounced this Tuesday that the governments of the United States of America (USA) maintain ties with the social network Twitter in order to act against their country.

The Foreign Minister spoke of the attacks as part of unconventional warfare, specifically psychological warfare, and sought a response from the relevant authorities of the northern government in this sense.

The Twitter Files, documents leaked to reporters, show that US intelligence agencies, the Pentagon and the State Department have coordinated psychological warfare operations with Twitter. At the same time, the Federal Bureau of Investigation (FBI) asked the company to respond to their requests. Paid for, ”said the Cuban official.

loss #twitterfilesDocuments leaked to journalists reveal that US intelligence agencies, the Pentagon and the @state Department Coordinated psychological warfare action with Twitter. At the same time, the FBI paid the company to respond to its requests.


The minister said that the targets of these attacks are Cuban users and revealed that Matt Taibbi, editor of SubTalk, showed a list of accounts against which Twitter had implemented censorship at the prompting of the above entities.

The secretary of state demanded answers from the US government and took the opportunity to recall the millions that that country’s federal budget allocates year after year to carry out subversive programs against the Caribbean nation.

“I reiterate the complaint made to the United Nations (UN) on November 3 and seek answers,” he said.

Rodríguez Parrilla has, in deliberate actions, labeled publications affiliated with the Cuban state to limit their access and eliminate accounts that expose destabilizing actions against the Latin American archipelago.