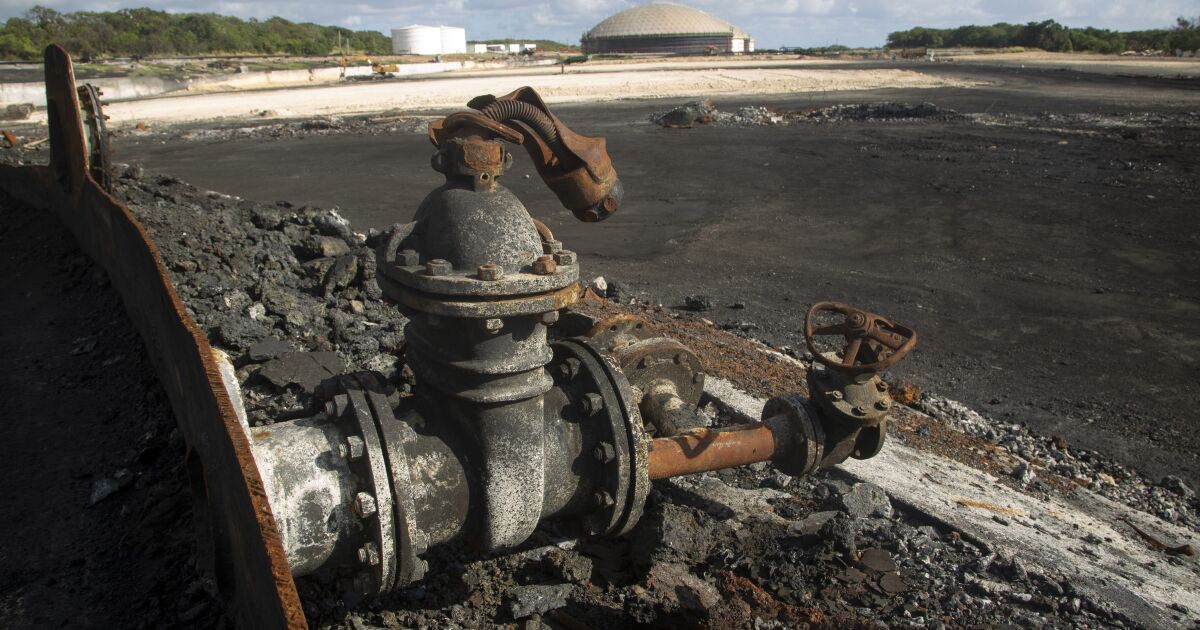 Four months after the worst fire in memory in the country’s oil industry and in the midst of a crippling energy crisis, Cuba is still struggling to recover the operational capacity of its supertanker base, which serves as the country’s largest storage facility for crude. The most important is infrastructure.

Meanwhile, residents of nearby areas are still living in panic and are waiting to be shifted to houses built in some distant areas.

On August 5, a fire started by lightning in a crude oil tank spread and took a week to extinguish. It killed 16 people, injured over a hundred and caused damage to infrastructure.

Material damage reached about $66 million, reported Rigel Rodríguez, director of the Matanzas supertanker base, about 100 kilometers east of the capital and next to the bay of the same name, ahead of a tour of the site from a group of journalists this Friday.

Hydrocarbon laboratories, workshops, offices and four tanks of 50,000 cubic meters each of crude oil were lost amid the flames, which had to be extinguished with the help of firefighters from across the country—including 16 casualties—and Mexico and Venezuela. Experts from the U.S.—the two closest nations with experience in oil matters—arrived at the emergency with foam and specialized technology.

Managers explained that in these months, the recovery was conducted in two phases, the first is currently underway and more than 70% execution which includes demolition, removal of thousands of tons of folded debris and salvage of dock works.

Lieber Sams, head of investments at the supertanker base, said, “The base has continued to operate to its limits, now that we have less crude storage capacity, but we have not stopped providing service with enormous effort.”

“We can’t afford to stop,” Sams said. “This base is vital to the country’s economy.”

The Matanzas Supertanker Base was composed of eight storage tanks – separated in groups of four – of approximately 50,000 cubic meters each, it also had five docks to receive vessels of up to 180,000 tonnes and a 20-metre draft carrying petroleum, fuel. oil and imported diesel.

It also receives crude oil from a pipeline that passes through the center of the island.

The four tanks that were not affected – the second block – are working for now, but the directors plan, as they indicated, to build another four with new safety measures, including longer distances and reinforced Earth other than concrete.

The first of these containers will, according to official plans, begin to be assembled next March and the rest gradually with an investment – entirely national – of around $55 million.

According to officials, the tanks followed safety regulations, but the safety focused on avoiding spills, not fires as such.

Cuba generates barely half the hydrocarbons needed for its economy and the change in political model is amid a crackdown on ships supplying fuel to the island amid US sanctions.

The energy crisis and blackouts were among the triggers for the popular protests of July 2021 and the ones that started last October, so any impact – such as damage to the infrastructure of the supertanker base – in a region that is in such a vulnerable state is vulnerable.

For example, peak demand was 3,188 MW a day in 2022, but electricity generation only reached 47% on some days in July, which explains the magnitude of the blackout.

However, the gap between current production and requirements has improved in recent weeks. A day earlier, officials indicated that availability during peak hours is 2,424 MW against a peak demand of 2,750 MW, giving an impact of only 326 MW.

Within a few meters of the base, among the most closely affected neighbors, the effect is still notable.

“The saddest day of my life was August 5,” Nilvia del Pino, a 50-year-old housewife, told The Associated Press with tears in her eyes. “Now I feel bad, like when a car accident happens, you create a panic… At night, every noise you hear, you feel something (bad) is going to happen.”

Del Pino and her husband Jesus are one of the families who had to move into a neighborhood where 24 homes are being built, according to officials. Four months after the accident and five homes have already perished, with the rest in the coming weeks according to the authority’s calculations.

The woman regretted that her new home was far from the supertanker base where her husband worked. However, he admits, “it will always be better” than their current facility, in front of the damaged storage center.

According to environmental technicians, after conducting a study after the fire, no ecological damage was reported in the area.

Euryslidis Vazquez, a 39-year-old nurse, lives near the beach.

“We ran in the rain, barefoot, without taking anything, we left the houses open and everything … about a kilometer,” said Vazquez. On the day of the fire, he was at home with his son, his daughter-in-law, and was visited by a brother, his sister-in-law and their little boy when the first tank exploded and horrified everyone. her life. “They promised not to come back here again,” he lamented.