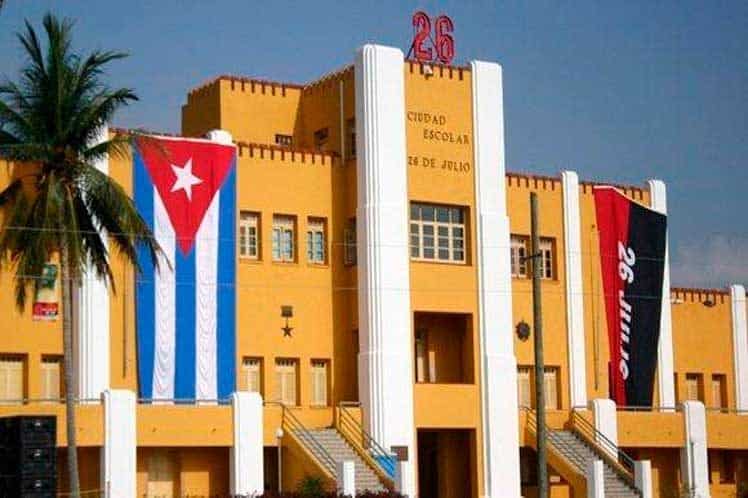 The effects of the shots that can be seen on the façade and yellow perimeter wall of the old Moncada barracks are a reminder to historical memory and to creatively assimilate the glorious legacy of the epic of July 26, 1953.

Through the ravines of the fort, converted into a school town, one can glimpse the daily life of this city, which was awakened on a carnival Sunday morning, shaken by the misadventures of the young revolutionaries led by Fidel Castro. that one of them had said. Wanted to take the sky even from the storm.

That July 26, 1953, as at 5:12 a.m. as attackers attempted to take the country’s second-largest military fort as a measure of immense audacity against an army superior in men and weapons, they used Jose Marti as a talisman. ideas, whose centenary year passed in January of the same year.

Although so carefully conceived, because of the failure of the surprise factor, the action did not achieve the fundamental objective, which was the seizure of the military complex of Fulgencio Batista’s tyranny, it marked the beginning of the final stage in the rebel conflicts. ,

A true bloodbath lived in the city in the following days with the murder of several participants, the fierce persecution of any suspect, the imprisonment of the main people involved, and a trial condemning their fearlessness.

This is how fighter Gloria Cuadras described it in the book The Uncovered Face of the Underground: “Those days were gruesome, people moved in an extraordinary way, especially those of us who were revolutionary.”

Supported by her husband, Amaro Iglesias, she made a bold gesture: “… save the remains of the fallen. Prevent by all means that they were hidden forever so that no one would even put flowers on the graves of those who died.” those who came to our province to give their precious lives to liberate the country…”. But saw a truck laden with raw coffins, some covered in blood. Gloria describes the movement in the Santa Iphigenia cemetery with lifeless bodies, already almost rotten, Dantesque.

There were nine graves where he was buried in an area for the poor and in the Registry Book of the Necropolis he was referred to as the “Unknown Dead”. The wooden rectangles that were kept secret later allowed the identification of the illustrious raiders.

Read Also:  Protestors attacked the SHO of Delhi Police with a sword on the Singhu border

In a self-defense petition known as History I will be acquitted, when invoking the verses of José Martí in tribute to medical students killed by Spanish colonial rule, the young jurist said: “The crime of November 27, 1871 Multiply by ten and you will have the dreadful and heinous crimes of July 26, 27, 28 and 29, 1953 in front of you.

Later, he sentenced: “Besides, my companions are neither forgotten nor dead; They live longer than ever before and their killers have to see how the victorious ghost of their thoughts emerge from their heroic corpses.

in an attempt to restart the definitive crusade

After an amnesty received in 1955 due to strong popular pressure, he went into exile in Mexico and, from there, made preparations for the journey to resume the definitive crusade against the satrap’s government. Thus, on December 2, 1956, the Granma ferry reached the eastern shores with 82 expedition members and the Freedom parcel.

The 26th of July Movement, which emerged as a political organization to unite the desire for a deep and radical change in Cuba, was at that time most responsible for channeling and insurgent forces, the armed wing, from the Mexican came from the early nucleus. Soil, it was nourished by farmers from the mountains of the Sierra Maestra and other secret revolutionaries.

Five years, five months and five days after the attack on Moncada, the declaration of rebel victory from the city’s founding center marked the beginning of a phase in which, according to Fidel, the undisputed leader of those operations, everything would be much more difficult. .

His initial words marked the economic and social changes brought about by the revolution since then, which, like few others in the world, were subject to the suffocation of the greatest world power, which does not accept the creation of socialism under its nose.

Nothing has been easy, really, and 69 years after the deed, Cuban revolutionaries faced a difficult crossroads, a two-year battle against Covid-19 and the United States government’s economic, commercial and After the opportunistic intensification of the financial blockade. Amidst the global economic crisis triggered by the pandemic.

Constructive resistance was urged by Miguel Diaz-Canel, First Secretary of the Communist Party of Cuba and President of the Republic, in the country’s complex circumstances, which was a historic mandate to convert failures into victories, a proverb always attached. It was due to the relative failure of Moncada by Fidel.

In the ancestral cemetery of Santa Iphigenia, Cubans have an altarpiece of belonging and identification with the final appearance of the national hero, José Martí; The Fathers of the Nation, Carlos Manuel de Cespedes, and Mariana Grazales, mothers of those born in this land and committed to it, together with many heroes.

Nearby, a memorial to those who fell in the attack on Moncada, which does justice to the promise made to the nation in the Declaration on December 12, 1953, in the Presidio of the Isle of Pines:

“I hope that one day the free motherland will travel to the fields of the untamed East, with the apostles to collect the bones of our comrades, to be gathered in a great tomb, as martyrs who have been from the century and whose epitaph is the idea of ​​Marty”.

Revealing, the phrase that read there: “No martyr dies in vain, nor is any thought lost that takes it away or brings it closer, but the memory of seeing it remains forever. “

Since Sunday, December 4, 2016, from the ashes of the novice lawyer who, along with his allies, tried to overthrow the bastion of the dictatorship of Fulgencio Batista in order to promote a dignified life for his compatriots, new energy continues To keep together emerged to build the future.

Very close to the apostle, and defying the stormy winds that tried to subdue the rebel island, the historical leader of the revolution continued to call for audacity and love.