Demonstration of AMLO weapons at the Martin Luther King memorial: “We need to keep the dream of a transformation” 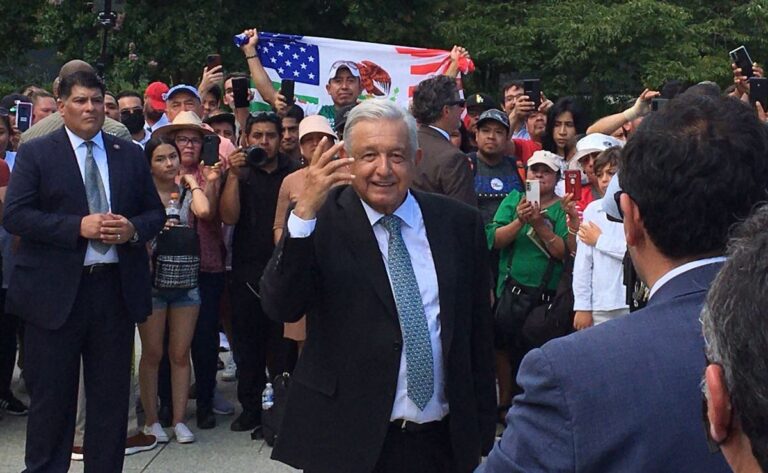 Washington, DC, USA.- In what was only planned to be the placement of an offering of flowers at the memorial dedicated to Martin Luther Kingthe president Andrés Manuel Lopez Obrador led a rally together with about 200 fans.

In the monument dedicated to the fighter for civil rights in that country, the chief of the federal executive stated that the greatest teaching left by social fighters like Gandhi or Martin Luther King was that it is possible to create a transformation to live better, so that there is justice and that there is no more discrimination or racism.

The Mexican president stated that Mexico’s history with the United States has been one of heartache, as there are moments that are not forgotten because “they were like a big blow” – in reference to the loss of more than half of the Mexican territory – but he acknowledged that there are moments of help between the two countries, such as the relationship between the US president Abraham Lincoln and Benito Juarez or the “Bracero” program promoted by President Franklin D. Roosevelt.

“The greatest teaching that Martin Luther King especially left us is that a transformation can be made to live better, so that there is justice, so that there is no discrimination, racism. Yes, a better society is possible for everyone, this is the dream we have, as he said `I have a dream‘.

“We have to keep maintaining this dream, this utopia, and we and those who come after us, our children, our grandchildren, this is Martin Luther King’s greatest teaching,” he said.

Accompanied by the US ambassador to Mexico, Ken Salazar, as well as part of his entourage, President López Obrador thanked the presence of Martin Luther King’s son and his family.

“I am very happy to be here with you today and I thank your family members, your son who is here.”

Amid applause of “It’s an honor to be with Obrador!” He recalled that in February of last year he invited the son of Martin Luther King to an act in Oaxaca, in the commemorations of the Bicentennial of the Consummation of Independence.

“I am happy to be here, these martyrs, heroes who left us greater teachings to continue fighting for the good of the people and our nations, it gave me great pleasure.”

Sign up here to receive our newsletters on the day’s news, opinion, options for the weekend, Qatar 2022 and much more.