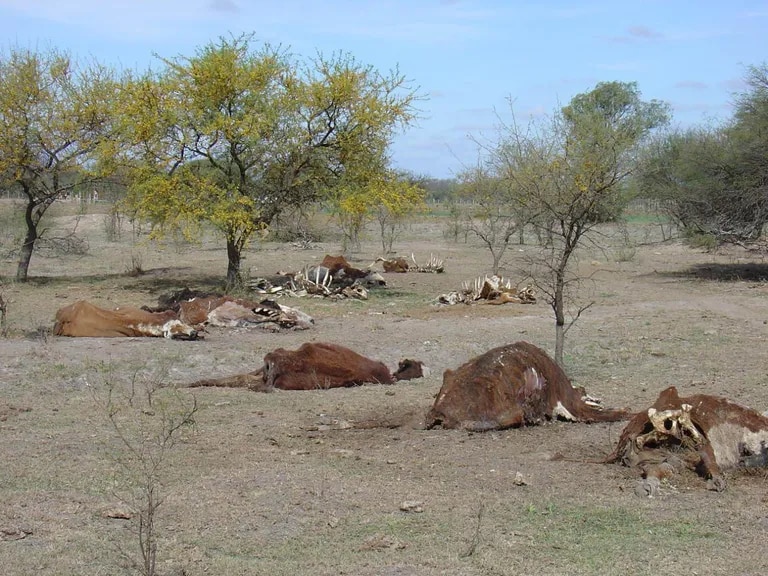 SANTA FE.— In a desperate attempt not to lose what little is left of both agriculture and livestock, growers north of Santa Fe requested ,urgent inter-regional meeting between the provinces Santa Fe, Santiago del Estero and Salta, to agree to open the gates on the Salado River route”, which allows to recover part of the supply disrupted by the drought of the last three years.

“It is the fastest solution that we consider feasible to implement if there is a good trend. We need to open them gate established by the provinces of Santiago del Estero and Salta, which They are practically leaving that channel without water in our area”. The president of the Rural Tostado Society, Jorge Mercau, spoke this morning and said: “El Salado continues to be cut off, with many parts south of Tostado without water, and We depend on the will of many who send water in tanks or drums to meet the demand, If the floodgates are opened, possibly in two weeks, this situation may begin to change”.

What the rural leader highlighted is part of the harsh reality faced by the north-central departments of Santa Fe from the southern border, meaning Provincial Route 39, to the border with the provinces of Chaco and Santiago del Estero. In the area that makes up the departments of San Justo, San Cristóbal, 9 de Julio, Vera and General Obligado, drought is unforgiving and the lack of water punishes the humans living in the region, but it also affects production. Because the only supply possible is by the Salado River, which originates in Salta and flows into the Paraná River at the southern border of the provincial capital.

“Despite the rains of the past 15 days, which were rare and localized in some areas, the Salado River It is cut and there are areas where you can cross it on foot”, said Merkau.

As he remarked, “There are many producers who do not have water, and the most serious thing is that the mortality rate in the fields is very high, Ranchers are moving ranches from one place to another. This is an extreme situation as it is known that an animal that has left the area will not return. Manufacturers here in the north are very committed,” he said.

He also warned about the shortage of hay and announced that “Pregnancy is about to be scary”. Indian: “We will have 20 or 30 per cent less than usual. To this we must add that animals are reared with body condition from good to bad”.

Regarding the crops, the head of Rural de Tostado said: “The wheat harvest was not good; Some lucky people cut some in the sunflower. Cotton is being planted now and soybean is awaited. If it rains again over the weekend, there is a possibility that pastures could be sown for later use. But it is becoming more complicated every day,” he insisted.

Merkou stressed that “beyond the financial aid that can happen at the provincial and national level, it is It is extremely necessary to finalize the inter-jurisdictional meeting between the three provinces in order to respect the provision of water through the Salado River.

They are also asked about the signing of an agreement between the nation and the provinces of Santiago del Estero and Santa Fe to join efforts to take all necessary actions to promote the development of the Works Project “Hydroveal Interprovincial Santa Fe-Santiago”. was consulted. del Estero-Section III”, and the award of the San Javier-Tostado Aqueduct in January, which was presided over by Alberto Fernández yesterday in the capital of Santiago. “In this region we are the receptionists of excess water and drought. Those are long term tasks. Here, urgency is what we ask: Open the floodgates upstream”she added.

The situation is serious in Vera department as well. “It doesn’t rain and people have run out of whatever resources they had. He sold the calves and spent all the money on transfer of food and water. There is no water and the situation is hopeless. The grass barely grows and the cows don’t even have the strength to stand; “They die with the calf inside because they cannot give birth,” explained Yolanda Arce, a member of the Union of Organized Families of Small Producers of Wooded Veg (UOCB).

For its part, the agricultural projections report released this Wednesday by the Santa Fe Stock Exchange (BCSF) indicated that water shortages In profiles closer to the surface north of Santa Fe, late corn and soybean sowings are delayed and there is no certainty now whether they will eventually materialize.

In this area, 70% of the estimate for second grade soybeans was planted, about 406,000 hectares, and then the process was halted while waiting for rains.

The early or Primavera cornfields reflected the effects of frost, lack of water, and absence of precipitation with marked thermal amplitudes (35 to 40 degrees average) of the high daily thermal record.