Device reduces sleep apnea in adolescents with Down syndrome 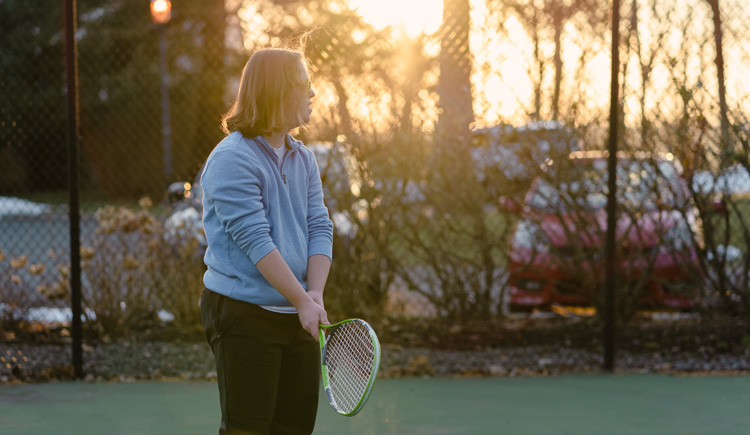 A surgically implanted device that moves the tongue forward during sleep was found to safely and effectively reduce sleep apnea in adolescents with Down syndrome, according to a study published April 21 in JAMA Otolaryngology-Head & Neck Surgery.

Children with Down syndrome are significantly more likely to have obstructive sleep apnea, and current treatment options are often ineffective. An implantable pacemaker-like device, called a hypoglossal nerve stimulator, may offer a new treatment option for this medically underserved population, according to the study’s authors. They plan to build upon the findings and test the treatment in additional clinical trials looking at outcomes including improvements in neurocognition and language ability.

“This study was born out of the frustration of not having an effective treatment option for children with Down syndrome who struggle with sleep apnea,” said lead study author Christopher Hartnick, HMS professor of otolaryngology head and neck surgery and director of the Division of Pediatric Otolaryngology and the Pediatric Airway, Voice, and Swallowing Center at Mass Eye and Ear. “Sleep apnea significantly impacts these children, often affecting their language, behavior, and ability to do well in school. Any diminishment in these areas is critical for families, and our study suggests we may finally have an option to help.”

Sleep apnea’s impact on children with Down syndrome

Pediatric obstructive sleep apnea occurs when a child’s airway is blocked during sleep, causing snoring, difficulty breathing, and restless sleep. For any child, it can result in daytime sleepiness, behavioral issues, and learning challenges.

This phase 1 clinical trial was the first to test the device in a pediatric population with Down syndrome.

In the study, 42 adolescents with Down syndrome and severe obstructive sleep apnea between the ages of 10 and 22 were recruited across five US medical centers. They all underwent surgery to implant the hypoglossal nerve stimulator and were tracked for one year.

The researchers measured participants’ apnea-hypopnea index (AHI), a measurement used to indicate severity of sleep apnea by counting the number of apnea events per hour during a sleep study. In children, an AHI of 0 to 1 is normal, 1 to 5 mild, 6 to 10 moderate, and anything more than 10 is considered severe.

The procedure was found to be safe overall. The most common adverse event was tongue discomfort in five patients, which typically resolved in weeks.

According to the researchers, the findings move them closer toward their goal of providing enough data to the FDA to approve this device for use in children younger than age 18 with Down syndrome.

“Sleep apnea remains one of the most common conditions that I grapple with working with patients with Down syndrome and their families,” said study co-author Brian Skotko, HMS associate professor of pediatrics and director of the Down Syndrome Program at Massachusetts General Hospital. “Until now, so many of our patients had run out of treatment options, and their health and well-being were declining. Now, with the hypoglossal nerve stimulator treatment, we may have an effective and safe way to treat apnea and maximize brain health for people with Down syndrome.”

The new research lays the groundwork to conduct further studies. According to Hartnick, the findings raise a need for looking at additional outcome measures besides AHI. Even children who had an AHI reflecting moderate-to-severe sleep apnea after surgery still reported quality-of-life improvements, which suggests neurocognition might be a more appropriate outcome to study, he said.

“Although our results were compelling, it revealed that we need to carefully look at what other outcome measures we’re using,” said Hartnick. “That’s what our next study is looking for.”

Hartnick and Skotko received a $4 million, five-year grant from the National Institutes of Health in January 2021 to study whether upper airway stimulation might improve neurocognition and language in young patients with Down syndrome.

“When parents reported anecdotally that the implant seemed to improve speech in their loved ones, we knew that we needed to investigate this further,” added Skotko. “The NIH grant will enable us to formally analyze improvements that the implant may or may not have on speech and cognition.”

The study was funded by Inspire Medical Systems, which provided eight devices for the study, but otherwise did not have a role in its design and conduct. The LuMind IDSC Down Syndrome Foundation also provided funding for the study.

Adapted from a Mass Eye and Ear news release.

NASA finds 10 new astronaut trainees with the right gear out of 12,000 candidates