Devin Hester, the record-setting Chicago Bears returner, is a finalist for Pro Football Hall of Fame. Here’s a look back at his ‘ridiculous’ career. 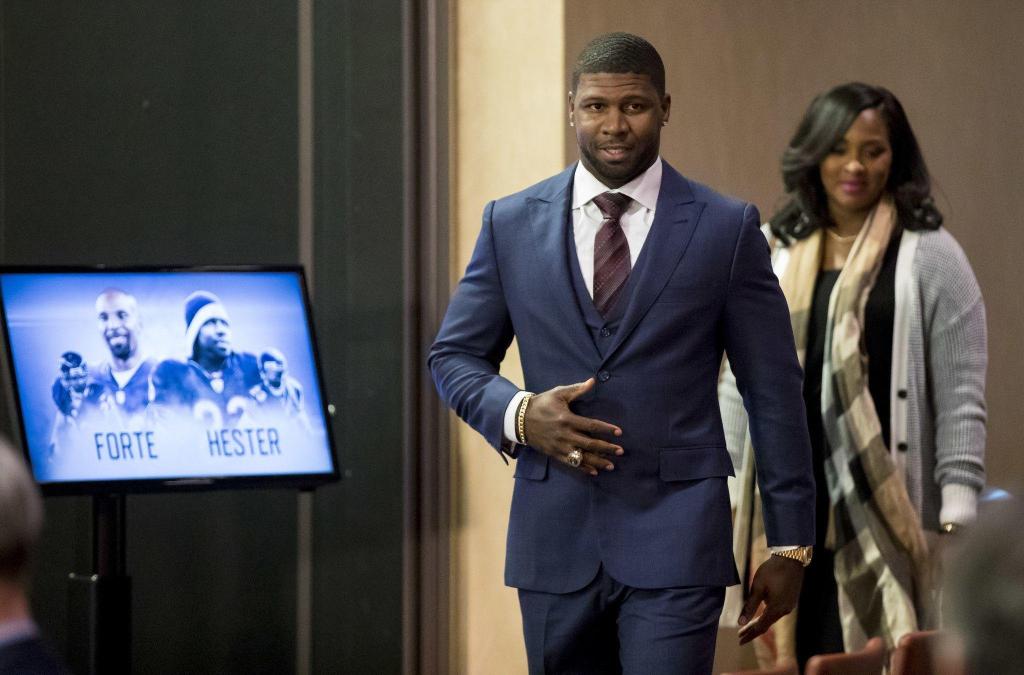 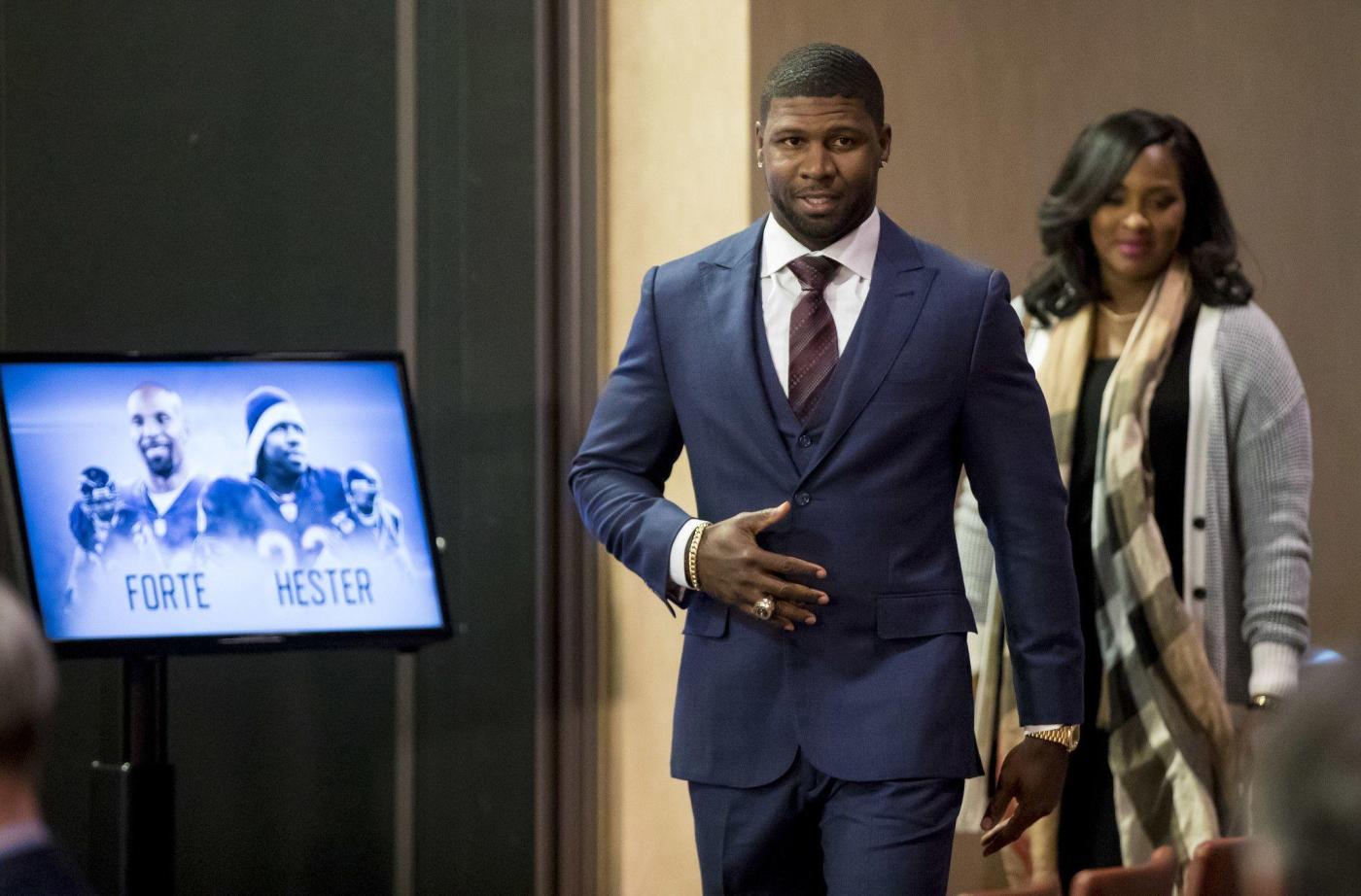 Devin Hester will find out this week whether he will join the long list of Chicago Bears in the Pro Football Hall of Fame.

Hester is among 15 modern-era finalists, a maximum of five of which can be selected for the Hall. The inductees will be announced Thursday at NFL Honors (8 pm, ABC-7) three days before Super Bowl LVI. The enshrinement ceremony will be in August in Canton, Ohio.

Hester, a finalist in his first year of eligibility, had a record 20 return touchdowns — 14 punts (also most all time), five kickoffs and a missed field-goal attempt — in his 11 NFL seasons, the first eight of which were with the Bears. A three-time All-Pro, Hester was a member of the NFL’s All-Decade Team of the 2010s and one of two return specialists on the NFL 100 All-Time Team.

If elected, Hester would be the 31st Bears player, coach or administrator to reach the Hall of Fame — the most in league history. The most recent inductees were offensive tackle Jimbo Covert and defensive end Ed Sprinkle, who were two of 10 seniors selections for the special centennial class in 2020 — though the enshrinement ceremony was delayed until August 2021 because of the COVID-19 pandemic.

Here’s a look back at Hester’s career.

‘He definitely changed the game.’ Examining Devin Hester’s clear case to be the 1st returner in the Pro Football Hall of Fame — in the 1st year on the ballot for the former Bear.

With less than a minute remaining to make their second-round pick in 2006, the Tennessee Titans had Devin Hester on the phone. They informed him that they planned to select him with the 45th pick, congratulated him and began to make travel arrangements to get him to Nashville.

Suddenly the Titans ended the call, and before their time was up, they had turned in a card with the name of USC running back LenDale White. Hester shed a few tears, but he was back to being himself when the Chicago Bears called 12 picks later and did in fact draft him — launching the career of the greatest returner in NFL history.

Ranking the 100 best Bears players ever: No. 19, Devin Hester

Devin Hester fielded the punt just outside the right hash mark at his 16-yard line at Lambeau Field. He caught the ball, took two steps forward, planted his left foot, took four strides to his right and turned upfield.

No one touched him as he zoomed through the Packers punt team. Big blocks by Ian Scott, Todd Johnson and few others sprung him, and Muhsin Muhammad and Charles Tillman took care of the last two Packers who had any shot at Hester.

In a flash, the Bears had increased their lead to 26-0, which held up as the final score on Sept. 10, 2006. Just as quickly, the rest of the NFL was in serious trouble.

The instant analysis after the Bears selected Hester, a 5-foot-10, 188-pound cornerback/kick returner, with the 57th pick (second round) of the 2006 NFL draft out of Miami? This from the Tribune:

“The Bears were beaten by speed receivers last season, and while Hester’s not going to push for a starting job, the Bears need to add options. Hester and (earlier second-round pick Daniel) Manning each could take a share of the return game immediately.”

Devin Hester won’t slow down, sets record for kick returns in a season

Devin Hester apparently can’t be caught. And in most cases, the Bears’ speedy kick returner can’t even be contained.

The rookie from Miami did it again Monday night, returning kickoffs 94 and 96 yards for touchdowns to highlight the Bears’ 42-27 romp over the St. Louis Rams.

In the second quarter, Hester set an NFL record with his fifth kick return for a touchdown in a season, then added the 96-yarder in the fourth quarter for good measure. He had four kickoff returns for 225 yards (56.3-yard average). He has three punt returns, two kickoff returns and one missed field goal returned for a TD this season.

Devin Hester makes kick returning appear so easy. Yet the Bears’ Pro Bowl performer insists the art of returning kicks is more challenging than becoming a top-notch receiver in the NFL.

“I would say the returning skill is more difficult,” Hester said. “You have (wide receivers) coming out who catch a thousand balls, but the return skill is harder.”

Hester returned a punt 64 yards for a touchdown in Sunday’s 33-25 season-ending victory over the New Orleans Saints at Soldier Field. It was his sixth kick return for a touchdown this season (four punts, two kickoffs), setting an NFL single-season record.

‘Please let them kick it to me!’: The oral history of Devin Hester’s Super Bowl XLI kickoff return touchdown — and the coverage team that dared to stop him

Brian Urlacher didn’t hesitate. As soon as the Bears captain and All-Pro linebacker glanced down at the grass and saw the commemorative coin with the helmet side up, he looked to referee Tony Corrente, drew both arms into his chest four times, then sprinted back to the sideline.

The Bears would receive the opening kickoff. Gladly.

Super Bowl XLI was about to begin on a rainy February evening 13 years ago in Miami. And that coin-flip victory — tails failed for Colts kicker Adam Vinatieri — gave the Bears their golden opportunity to light the wick of their most explosive firework.

‘The Bears are who we thought they were!’ An oral history of a magical Monday night

October 16, 2006. Glendale, Ariz. — A little after 9 pm Mountain time, a night’s worth of energy and hysteria had turned to disbelief. All around University of Phoenix Stadium, this newly opened retractable roof gem in the desert, the shock proved palpable.

Glowing from the scoreboards, the night’s final result made no sense.

In the Bears’ 102-year history, Devin Hester is part of seven of the franchise’s top 100 moments, as selected by Tribune reporters and editors.

Pretty impressive considering he was a second-round draft pick who focused on special teams.

Some of the moments are elsewhere here, but it’s a great trip down memory lane.

Devin Hester on exit from Bears: ‘They didn’t call me, period’

The reunion is coming Sunday afternoon at the Georgia Dome.

Devin Hester, once a Chicago Bear and now an Atlanta Falcon, facing the organization that drafted him, the team with which he registered 19 regular-season return touchdowns before scoring an NFL-record 20th in Week 3 with the Falcons.

Hester was a return specialist only in his final season with the Bears. His contract expired in March. And, according to Hester, the Bears made no push to keep him around.

Devin Hester drove to Halas Hall countless times during his eight remarkable seasons with the Bears. On Monday, en route to the retirement ceremony honoring him and former teammate Matt Forte, there was a new element to that old road.

“Normally when I drive here, I’m always late,” Hester cracked. “That was my first time driving the speed limit. I got a chance to enjoy the scenery.”

Finally, long after his arrival in 2006, neither fines nor the wrath of coach Lovie Smith waited for him.

Devin Hester lands a spot on the NFL 100 All-Time Team as a return specialist: ‘What an incredible and humbling honor’

Devin Hester’s ridiculous career with the Bears landed him on the NFL 100 All-Time Team. Is the Pro Football Hall of Fame next for the record-setting returner?

Hester was named one of the best players in league history, making the prestigious team as a return specialist. Other specialists named were fellow returner Billy “White Shoes” Johnson, kickers Jan Stenerud and Adam Vinatieri and punters Ray Guy and Shane Lechler.