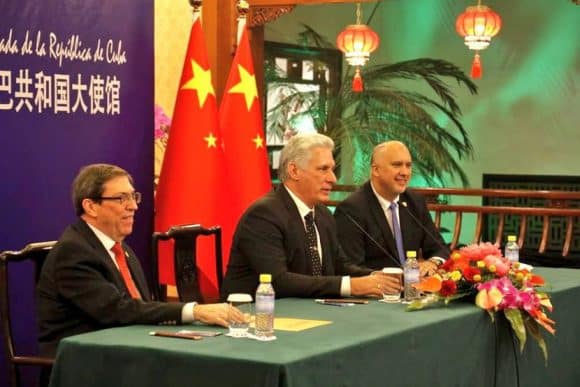 Havana, November 26 – “The results have been satisfactory, I would say they exceed our expectations”, the President of the Republic of Cuba, Miguel Díaz-Canel Bermúdez, was emphatic when assessing the official visit he made to China. Responding to President Xi Jinping’s invitation.

It is a tremendous show of support for Cuba in difficult times, as we achieved in Russia, Algeria and Turkey, he said during a meeting via videoconferencing with about a hundred Cubans who make up the state mission. . of the island in the Asian nation.

The meeting, which is common to all visits abroad by a head of state, had to be held virtually due to restrictions imposed in China due to the resurgence of COVID-19, which forced the travel to remain under a pandemic bubble plan. forced, which meant zero contact with those who were left out.

For us, Diaz-Canel reflected, the trip to China was very important, among other issues, because we have debt defaults based on the country’s economic-financial situation, especially the blockade of the United States since 2019. With the intensity, the impact of the pandemic, the meteorological events affecting Cuba, and the unfortunate accidents that have happened to us, all of these have created a stressful situation for us.

We did not have the opportunity to speak face-to-face with the Chinese government to explain, the President remarked, although we have had other forms of communication, but it is not the same when one can speak, when one can explain , When someone can talk, understand sensitively.

“The Chinese leadership, and President Xi Jinping in particular, is highly sensitive to the Cuban situation, and has a clear desire, even with hints in official talks, to find a solution to all problems Go with Cuba, regardless of debt problems, and this cannot be a factor limiting growth. They are betting on the development of the country on the basis of the cooperation that they can give us”, stressed the head of state.

The way the Chinese side has treated these talks, he said, this projection towards our small country, it seems that they are implementing on a small scale the concepts proposed by the Global Development Initiative.

He has brought into today’s conversation this great liberating concept that everyone can achieve inclusive development with Cuba. “And it’s very encouraging, it’s encouraging that there is a different treatment for a group of projects that are paralyzed with a high percentage of execution, that there is another type of treatment for pending projects, and all understanding so that the requests We make them official, and we propose what we need to follow through and seek help from a group of investors in Cuba. It’s exciting.”

The President also spoke of a sense of understanding of the island’s reality and a willingness to support issues such as repair and maintenance of thermoelectric plants, which were not worked out as part of the agenda, but which he also had a receptive ear for. . ,

“From that point of view, the outcome of the visit has been very good, we talked very transparently, very honestly, I think we got receptivity from the Chinese side and especially from President Xi Jinping, who himself expressed admiration, very consistent, recognizing the resistance of the Cuban people, the way Cuba defends its victories, and one recognizes that there is a great commitment,” Díaz-Canel acknowledged.

Now, he warned, our commitment to well being must be met, how we do things well, how we take advantage of opportunities, how efficient we are, how we don’t waste resources, and we How to get a substantial return on investment, and how each time we are more serious and more effective in the projects we propose to continue expanding cooperation.

The Cuban President mentioned three fundamental pillars in this cooperation: first, biotechnology; then the issue of energy, especially renewable energy sources; And on the other hand, computerization and cyber security.

But they are open, he clarified, to issues of food production, and we informed President Xi Jinping of the changes made in the application of the Foreign Investment Law to domestic trade and the importance we attach to Chinese companies being present. Can In Cuba domestic trade, both wholesale and retail. That idea has also been accepted, he said, adding that it is now necessary to identify companies that can do this.

The Head of State warned that all this disposition, must be specified in projects that actually move forward and are contributory. “We have to be very strict, very rigorous, very professional, especially when we’re dealing with friends who are supporting us, who are taking a little bit away from them. We have to work with a sense of commitment, a sense of ethics, which helps make sure the friend is what we’re doing.”