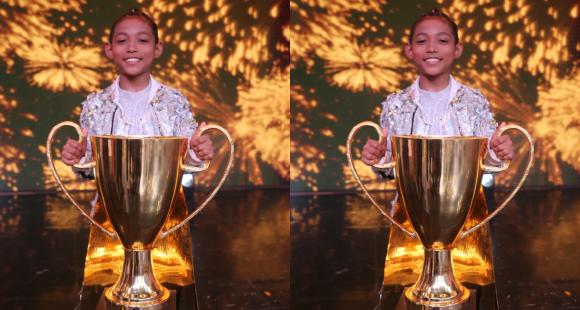 One of the most popular dance reality show DID Little Masters Season 5 has finally taken its wraps off with a grand event on 26th June. It was a starry evening with the cast of Jugjug Jio in the form of Varun Dhawan, Kiara Advani, Anil Kapoor, Neetu Kapoor, Maniesh Paul and Prajakta Koli making their presence felt. This season was judged by Mouni Roy, Sonali Bendre and Remo D’Souza. DID Little Masters 5 was hosted by Jai Bhanushali and the finale episode was co-hosted by Bharti Singh. And, finally, the nation finds its winners in the very talented Noboji Narzari of Assam. Apun became the runner-up while Adhyashree was declared as the second runner-up of the dance reality show.

To note, the top 5 finalists were Sagar, Nobojit, Apun, Adyashree and Rishita. She grabbed the attention of the judges and celebrity guests with her impressive finale acts. However, Nobojit, who has consistently performed well for Team Vaibhav, won the domestic trophy and prize money of Rs 5 lakh. The nine-year-old is known for freestyle, hip hop and contemporary dance styles.

After winning Season 5, Nobojit thanked his captain Vaibhav and judges Mouni Roy, Sonali Bendre and Remo D’Souza for helping them learn and grow. He also said that he will miss rehearsals, masti and masti.

Judges Mouni, Remo and Sonali also praised Nobojit. Remo said that Nobojit was a brilliant artist and has seen him grow on the show. Sonali and Mouni also congratulated the child and said that his hard work paid off.

ALSO READ: DID L’il Masters 5: Rishita remembers Mouni Roy as her childhood; The actress addressed her as ‘Choti Mouni’

BSNL warning, stay away from such messages or your bank account may be empty