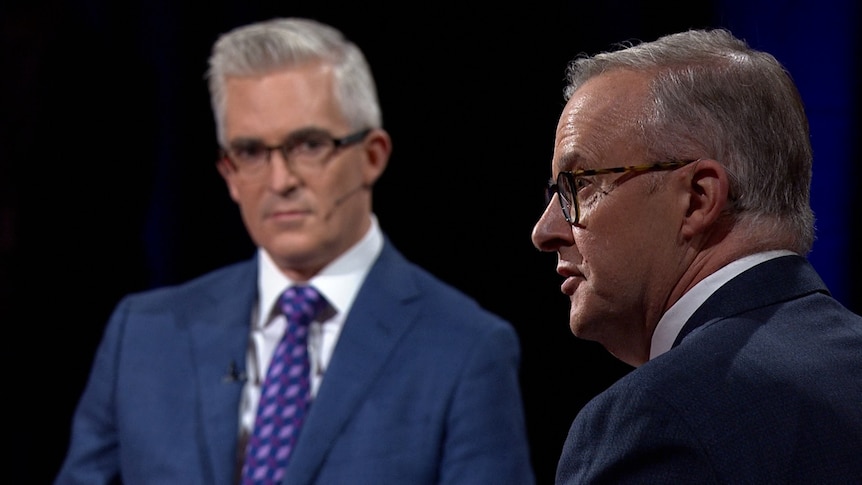 Opposition leader Anthony Albanese ended the Q+A with David Spears by taking a dig at the coalition following diplomatic failures in the Solomon Islands and failing to implement the federal ICAC.

And while the opposition leader took some blows, he was also blamed for missteps in his own campaign, including a failure to name six points in Labor’s plan for the NDIS earlier Thursday and to respond to Q+A. failure involved. Spear was repeatedly questioned whether pork-barreling was actually corruption.

While the episode was widespread and the prime minister has been invited to appear by Spears while reiterating, Mr Albanese used the last question of the night to deliver a pitch to Australian voters.

Asked whether he would compromise on issues if there was a hung parliament, his answer was an emphatic “no” as he squarely aimed at the Scott Morrison-led coalition.

“I will campaign for the next two weeks to ensure Australia has the certainty of a majority Labor government, with at least 76 members in the House of Representatives,” Mr Albanese said.

Asked by Spears if he was confident he would get there, Mr Albanese said he was in the position he wanted to be.

“When I became Labor leader, my aim was for us to be competitive, at least that’s what we are,” he said.

“We are at least that and we are in a position, I think, whereby we have a clear, coherent plan for a better future. Or you may just have that.”

“Governments in general don’t get better in their fourth term. Nothing says the law of diminishing returns like the Abbott, Turnbull, Morrison government.”

Part of what is perceived by Mr. Albanese and other members of the opposition as a government failure is China infiltrating the Pacific.

This has been most notable in the Solomon Islands, where a security deal has been signed amid deteriorating relations between Australia and Prime Minister Manasseh Sogaware.

The fear is that China will then build its defense base there.

But while Mr Albanese did not miss an opportunity to pitch the coalition on the issue, he offered no real answer as to what Australia would be able to do if China builds a defense base on one of Australia’s closest neighbours.

“What has happened here is that we have dropped the ball,” Mr Albanese said of the deteriorating relations with the Solomon Islands.

Asked what he would do if he had been prime minister and China had built a base there, Mr Albanese preached a policy of containment, but, like Mr Morrison, failed to say that as a measure of Australia’s response what will be able to do.

“definitely [Chinese base on Solomon Islands] would be unacceptable and we need to make sure we engage with Solomon,” Mr Albanese said.

“The aim will be to prevent this from happening through the programs and policies that we have put forward.”

Connecting with Solomon Islands politicians is one thing but connecting with the Australian public through the media is an area where Mr Albanese has stumbled several times in this campaign.

Initially, he was caught up in a “gotcha” moment for not knowing the unemployment rate and failing to name Labor’s own six-point policy on the NDIS on Thursday.

Asked about this by Spears, Mr. Albanese stepped in to dismiss the issue as he had earlier in the day and once again claimed that he knew his policy despite only dismissing six points, As Spears pointed out, she was given a sheet of paper by a consultant afterward.

The pair then went back and forth as Spears lashed out at the opposition leader.

“You said earlier in the campaign, when you stumble, you own it. Was it another mistake today?” Spear asked.

The Albanese replied: “No, it wasn’t, David. One of the things that keeps people away from politics, I think, is to play that kind of gotcha game.”

“Sure, I mean some people see it as a gotcha question and others want you to have the details, so there are mixed views on it,” Spears replied.

“I just want to clarify here, when today, and, you know, it’s been in all the news tonight, you were asked what the six dots are and you didn’t know, someone gives you a folder and you read this out – are you saying that you know off the top of your head?” Spear asked.

“The point here is putting people in charge of the NDIS and at the center of it – and one of the things that I think really separates people from the political system as a whole is the idea that politics is kind of a series of gotchas. is about and playing the game,” said Mr. Albanese.

The problem arose when single mother Kathleen Campbell asked via video what Mr Albanese would do to fix the NDIS. She said she was struggling to care for her son because of her disability, she told government red tape.

Mr Albanese said that in his view, the problem with the NDIS was that people were placed second only to the bureaucracy.

“The problem is people have been forgotten,” he said.

Asked what he would do to help Kathleen and others like her, whose children “have no special label”, Mr Albanese said: “Getting rid of bureaucracy so that the NDIA, the agency, can actually do such operations. Be the ones who treat people as human beings.”

One of the election promises Mr Morrison made last time was a federal ICAC, but that was not delivered by the government and on the Q+A, Mr Albanese was asked if he would implement one with retrospective powers.

Mr Albanese said what he said would be an independent ICAC, before failing three times to answer Spears’ questions about whether “pork-barreling” equated to corruption.

“The whole point here is that what I want is an independent system, at arm’s length from me and the government, which can look at any area of ​​corruption in the political system, in the bureaucracy, at any time,” Mr. Albanese said.

“And do you consider pork-barreling to be corruption?” Spears asked about the practice of spending public money to try to gain political mileage.

Mr. Albanese answered but not the question the host asked twice.

He said, ‘I think… See, commitments will be given by all political parties.’

“On the marginal seats, with our money, I did what I did – ‘Okay, I’ll tell you what I did’, as the minister responsible for community infrastructure and regional development and local government, all money through local government. Gone from.”

“But now you’re promising money for dog ovals and footy grounds on the marginal seats in this election,” Spears replied.

It was a claim that Mr Albanese did not deny before once again setting the Morrison government on fire.

“We are building a commitment to this election among both secure and marginal voters, it’s true,” he said.

,[But] This government has done this with billions and billions of dollars.

Australia Day will not change

One of the key promises Labor made is for an Indigenous voice for parliament and this was something Mr Albanese reiterated that he would prioritize over a referendum on making Australia a republic.

However, on another hot button issue, with 26 January being a day of national celebration, Mr Albanese said he would not change the date.

“Quite frankly, it is an issue but January 26 is an important historical day and I agree that it is a very difficult day,” he said.

“I have no intention of changing the date of Australia Day.”

Watch the full episode of Q+A on iview.

Robots hit the streets as demand for food delivery increases

On January 6, the commission voted to disdain Steve Bannon.