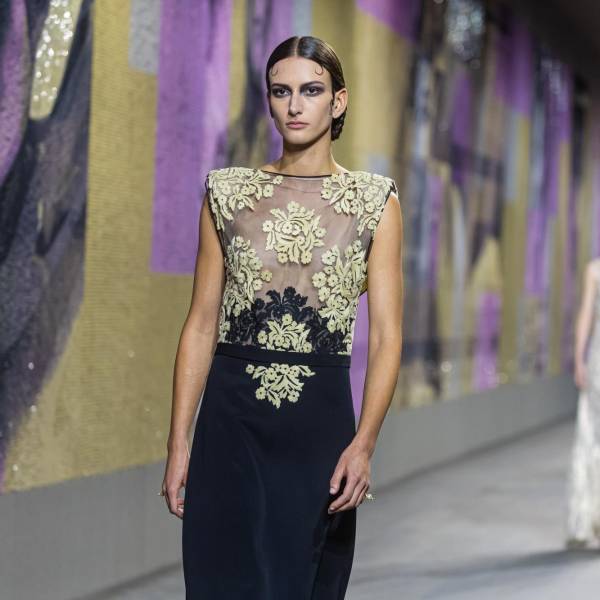 French-American dancer and singer Josephine Baker was, symbolically, a guest star at the Christian Dior Haute Couture show, which paid tribute to one of Paris’ most iconic figures in the 1920s with its collection.

In a line filled with beige and black tones, fluid and rectilinear silhouettes of fringe, sequined, silk and velvet dresses, the firm’s creative director, Maria Grazia Chiuri, showed that the recovery of the female figure remains at the center of her, I work . Dior.

The African-American singer who embodied modernity, becoming an icon of cosmopolitan Parisian glamor in the 1920s, also slayed in the parade thanks to models’ hairstyles that mimicked her short, tousled hair And marked curl. Edge.

A hairstyle as iconic as her smile and her special dress, with which she has since gone down and is now back to set trends for the spring-summer 2023 haute couture collection within the framework of Paris Fashion Week .

In 2021, the singer, who died in Paris in 1975, will also become the first black woman to enter the Panthéon, destined to honor great figures in French history.

With this show, Dior recalls the dreamy figure and example that Baker was, but also her energy, with clothes that were well thought out for dancing.

A coat is a gown that protects its wearer on the way from the dressing room to the stage. Velvet fabric is a soft fabric that falls on the model and marks the neckline on the back and chest with a simple drape, and satin and embroidery become the stars of the night.

Beige and black were the colors of the collection, with some gradients of gold and silver in the edging of the fringed fabric.

The silhouettes best-loved by the firm’s founder, Christian Dior, were revisited: the “new look” dress is now a shirt set in a metallic fabric, such as mesh, with a marked fall and transparency.

The tailoring suit is also reinterpreted, this time in more masculine clothing and with pants at ankle height to highlight the heels, with an impressive sole.

The decorations were done by African-American artist Miqueline Thomas, with whom Chiuri has already worked on the decorations for the Cruise 2020 collection presented in Morocco.

Thomas explores celebrity and femininity by questioning the prevailing canons of art history, particularly through the “collage” of painting and photography.

Today, the ship, installed by Dior in the gardens of the Rodin Museum in Paris, was decorated with huge “collages” hand-embroidered by the Chanakya Workshops and Chanakya Craft School, and which depict photographs of women breaking barriers and prejudices . ,

These included Baker, but also the first African-American woman to be nominated for an Oscar, Dorothy Dandridge, singer Nina Simone, or “top models” Naomi Sims and Donelle Luna.

“These women broke down many barriers in the fields of television, film, fashion and social activism. It is thanks to their determination and their sacrifices that I can be the artist and work I do today,” Thomas said in a statement. ” Guests at the parade included tennis player Roger Federer, actresses Kirsten Dunst and Anya Taylor-Joy, and singer Jisoo.